Responding to the tweet from actor-writer Munish Bharadwaj, Pookutty called the film a 'gay love story.' Adding to that, he also made a statement calling Alia Bhatt 'a prop' in the movie.

New Delhi: Having worked on some of the biggest Indian films over the years, the Oscar-winning sound designer Resul Pookutty has sparked a controversy on Twitter with his comments on SS Rajamouli's magnum opus 'RRR.'

Responding to the tweet from actor-writer Munish Bharadwaj, Pookutty called the film a 'gay love story.' Adding to that, he also made a statement calling Alia Bhatt 'a prop' in the movie. 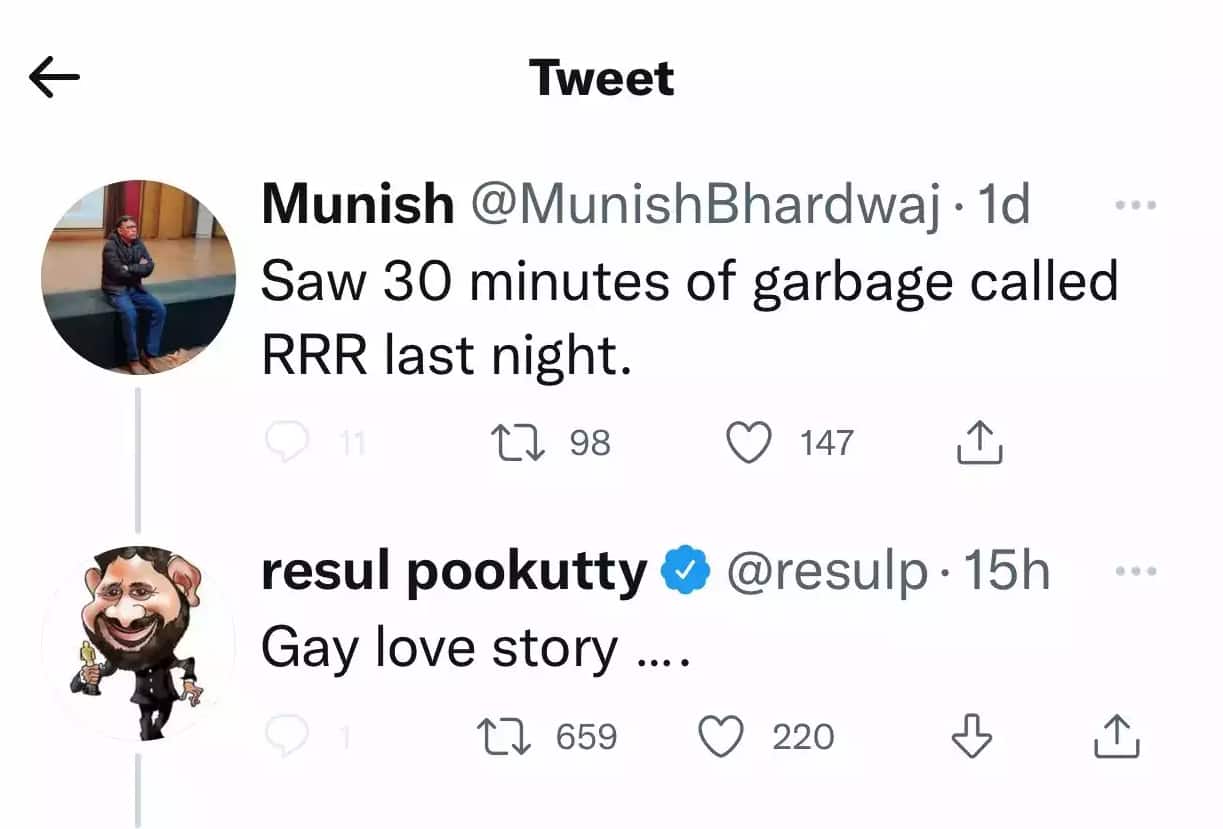 Fans of the movie did not take Pookutty's comments well and reacted angrily for pretty obvious reasons. Although Resul disabled the option for fans to reply to his comment, numerous users quoted his tweet and expressed their disappointment over the unexpected response from the Oscar winner.

A user on Twitter wrote, "There is no shame & harm even if it`s that kind of story #LGBT. Did not expect such low comments from an Oscar award winner. Respect should be given to the profession irrespective of its language & even if it does not satisfy us."

Another fan expected his disappointment, saying, "Not expected this from an Oscar winner." However, this is not the first time the film has been associated with the LGBTQ theme. After the film was released on Netflix, a number of international viewers were seen criticising the bromance between the two protagonists.

Commenting on Alia`s cameo in the movie, Resul said that she was used as a 'prop.' However, Alia had earlier stated that her role is 'small but important' during the film's promotions.

However, the Oscar winner later clarified that he was merely quoting the statements that were made by the international viewers.

RRR is a fictional story set in the pre-independence period, based on the lives of two real-life revolutionaries: Alluri Sitarama Raju and Komaram Bheem. The movie starred Ram Charan and Jr. NTR with cameos from Alia Bhatt, Ajay Devgn and Shriya Saran.

'RRR' received a lot of praise for its magnanimous presentation on the big screen, earning a whopping amount of over 1200 crores globally.

Meanwhile, the hugely talented Oscar winner Resul Pookutty boasts of a respectable lineup of work, including films like Black, Enthiran, Ra.One, Pushpa: The Rise, and Radhe Shyam. In 2009, he won the Academy Award for Best Sound Mixing on Danny Boyle's Slumdog Millionaire.