Kriti Sanon dating Prabhas: The actress also took to her social media handle and put an end to the baseless rumour.

New Delhi: Bollywood actress Kriti Sanon has been making buzz about her dating rumours and speculations these days. While the actress recently stunned the audience with her performance in Bhediya, the latest goss spread like fire which claimed that, Kriti Sanon was dating her Adipurush co-star, Prabhas. However, this was brushed off as a bad marketing stunt, but the speculations got stronger when Kriti’s co-star Varun Dhawan, teased her with Prabhas’ name recently.

Recently during the promotions of Bhediya, Varun teased Kriti with Prabhas' name during an interview, where he said, “Biggest congratulations hai aapko aapka partner dhundne ke liye. (Biggest congratulations to you for finding your partner).” He was also seen saying that Kriti Sanon looks best with Kartik Aaryan and Prabhas and hinted towards them. As Kriti understood that Varun is having fun with her, she exclaimed, “Oh God, you guys are really starting this rumour now. I’m very much single.”

Kriti also took to her social media handle and put an end to the baseless rumour. 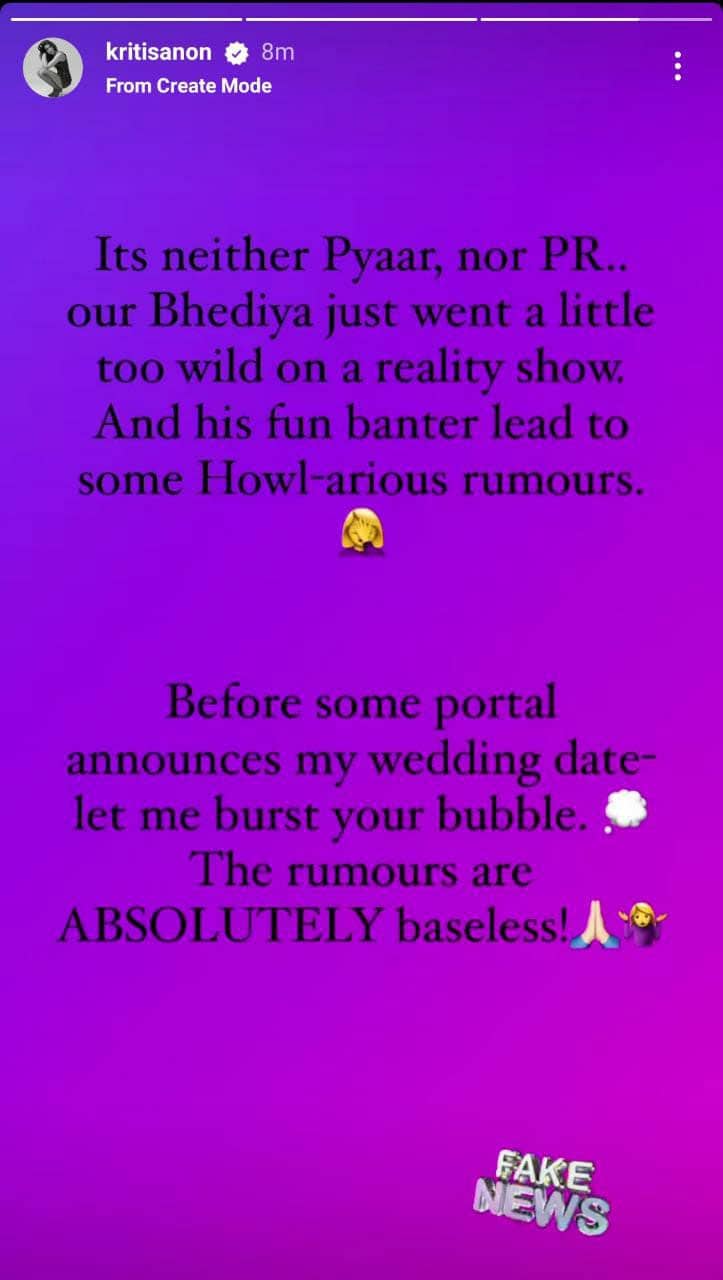 Now, to clarify the rumours that started off post this episode again, a source close to the development told a leading portal, “Varun and Kriti share a very friendly bond and they often pull each other’s leg. That tease by Varun was just a way of him taking Kriti’s case as he knew these rumours were baseless. Kriti and Prabhas are not seeing each other. They share a friendly bond as co-stars and really respect each other, but that’s just it.”

With Bhediya now released, Kriti also recently unveiled the teaser of her upcoming next Shehzada alongside Kartik Aaryan. Apart from this, Kriti boasts of a strong lineup of films including, Adipurush, Ganapath, and The Crew. Varun on the other hand, will also be seen in Bawaal.