Man shot by police at US Capitol complex

The suspect, Larry Dawson, 66, of Tennessee, was in stable but critical condition at a hospital, Capitol Police said in a statement. 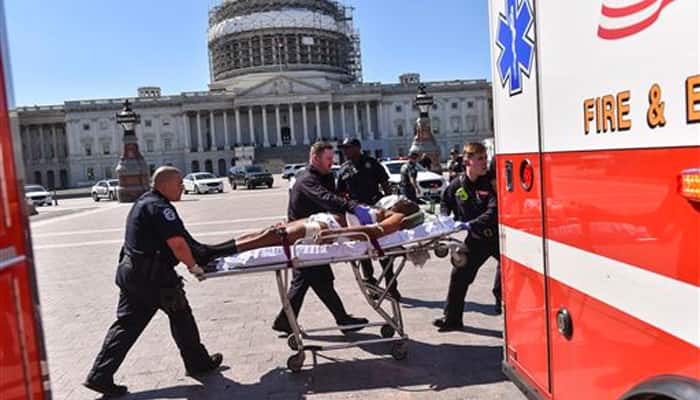 Washington: A man walked into the underground US Capitol Visitor Center on Monday and was shot and wounded by police after he pointed what appeared to be a weapon at officers, police said.

The suspect, Larry Dawson, 66, of Tennessee, was in stable but critical condition at a hospital, Capitol Police said in a statement.

A female bystander who suffered wounds was also taken to the hospital, Capitol Police Chief Matthew Verderosa said at a news conference. Her condition has not been disclosed.

Police believe the weapon may have been a pellet gun as opposed to an actual firearm, the Wall Street Journal reported, citing a law enforcement official.

Dawson has been charged with assault with a deadly weapon and assault on a police officer while armed, Capitol Police said.

No police officers were injured, Verderosa said. He said it was unclear how many officers fired shots. A weapon was recovered on the scene and the suspect`s vehicle was found on Capitol grounds, he said.

"During routine administrative screening, the individual drew what appeared to be a weapon and pointed it at officers," the police chief said.

Verderosa said the man was known to Capitol Police.

"Based on initial investigation, we believe this is an act of a single person who has frequented the Capitol grounds before. There is no reason to believe this is anything more than a criminal act," Verderosa said.

Police arrested Dawson in October after they said he interrupted a House of Representatives session, shouting he was a "Prophet of God," the Washington Post reported. A judge ordered him to stay away from the Capitol grounds, the newspaper said.

A US government official said no evidence had materialized of a connection to terrorism.

On a day when the Senate and House of Representatives were not working and few lawmakers were in Washington, the Capitol building was briefly locked down, but then reopened for official business. The Capitol Visitor Center is used chiefly by tourists.

The US Secret Service temporarily cleared tourists from an area around the White House.

More than 2 million people a year go through the Capitol Visitor Center, Verderosa said. He said it would be open for business as usual on Tuesday.

Big Statement By Governor of Kerala, says - the one who was born in India..is a Hindu

PM Modi's attack on haters, says - the mantra of unity is heavy on hatred

Politics intensify on changing the name of Mughal Garden