An Indian-origin convenience store owner in the US has become a celebrity overnight after he sold one of the three Powerball winning lotteries with a record jackpot of USD 1.6 billion. 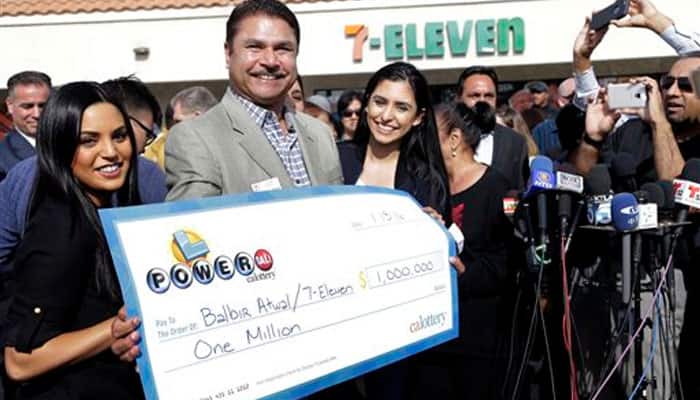 Balbir Atwal, owner of the 7-Eleven store that sold one of the winning Powerball ticket, holds the cheque he received for USD 1 million with his daughters, Sabrina, left, and Sonia, right, at his store in Chino Hills, California.
Share:
Updated:
Jan 15, 2016, 11:04 AM IST
Source:
PTI

Washington: An Indian-origin convenience store owner in the US has become a celebrity overnight after he sold one of the three Powerball winning lotteries with a record jackpot of USD 1.6 billion.

Two others were sold in Tennessee and Florida.

Atwal said he was surprised to learn his store was one of the lucky ones, calling the group of revellers "a big family".

"I didn't believe it and then I looked at it carefully again," Atwal said.

City officials described Atwal as a cornerstone in the community, after he was among the first business owners to set up shop in the city after its incorporation.

Atwal said he planned to give a part of his winnings to charity and share the rest with his employees and family.

"This is a land of opportunity," said Atwal.

"Anybody who comes, you will achieve your dreams."

Atwal came to the US from Punjab, India in the early 80s, and opened four 7-Eleven stores, including the Chino Hills location about 24 years ago.

"I 100 per cent believe he deserves this," Sonia Atwal, one of his three daughters, was quoted by NBC News as saying.

"He pretty much set his foot here and helped our family make it- the American dream."

Shortly after the announcement on Wednesday, a huge crowd packed the 7-Eleven chanting "Chino Hills" to celebrate the historic win in the usually-quiet suburb city of about 75,000 residents.

Although the large group did not win big, they said it was exciting to know the winner was from their community.

More than 30 media trucks were parked outside the Chino Hills store to cover the event.

It was not immediately known who the winning ticket was sold to, and lottery officials said he or she had one year from Wednesday to come forward.

The jackpot on Wednesday was not just the largest in Powerball history, New York State lottery officials said, but also the largest of any lottery game in the United States.

The jackpot started at USD 40 million on November 7 and rolled over 19 times, with no one matching all six numbers.

Violence erupts between Israel and Palestine

Plane Crash: The accident happened due to a technical fault?

Pakistani rupee experiences worst one-day decline in 20 years, plunges to 262 against the dollar

45-year-old Biotech founder tech is spending millions a year to be 18 again. Here's how