All you want to know about Arunachal Pradesh, Madhya Pradesh, West Bengal bypolls

This is the first time when all the major political parties will be locking horns after the demonetisation masterstroke. 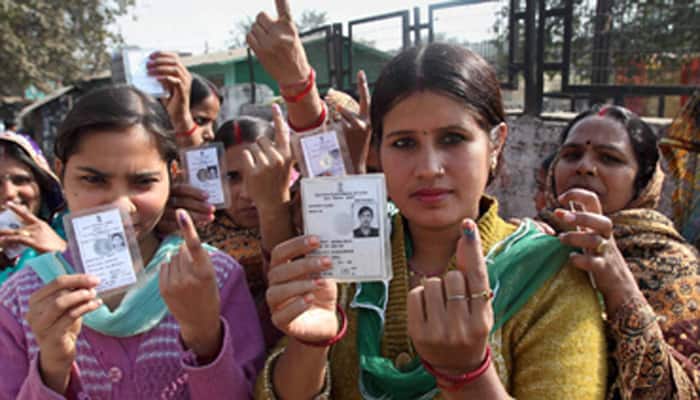 New Delhi: By-elections are being held in Arunachal Pradesh, Madhya Pradesh and West Bengal on Saturday under the shadow of the Centre's decision of scrapping high-value currency notes.

This is the first time when all the major political parties will be locking horns after the demonetisation masterstroke.

By-election to Hayuliang Assembly constituency in remote Anjaw district of Arunachal Pradesh are taking place on Saturday. Both the women candidates have tried their best to woo voters.

Addressing an election rally at Hayuliang earlier, Chief Minister Pema Khandu appealed to the people to vote for Dasanglu as a mark of respect to the former chief minister.

While assuring the people of his government's all-out support for the overall development of the border district, he also promised to review road compensation rate, promote large cardamom cultivation and shift the present firing range of the Army at Cherang to elsewhere, an official communiqué said.

State BJP president Tapir Gao, Home Minister Kumar Waii also made pleas to the voters to support Dasanglu for the development of the district bordering China, it added.

The constituency with a total electorate of 11,003, including 5,508 female voters, has 81 polling stations of which three--Kibitho, Aphumna and Taflagam--are situated near the International Border with China.

The seat had fallen vacant after Pul committed suicide on August 9 this year.

The counting of votes will take place on November 22.

The by-elections to Shahdol Lok Sabha and Nepanagar Assembly seats in Madhya Pradesh on November 19 have assumed more significance as the first major ground test for the ruling BJP after demonetisation of high-value notes.

It is crucial for the BJP to retain both the seats as defeat of its candidates is certain to be dubbed by the opposition as the "voters' response" to the demonetisation move by the BJP led Central government.

Shahdol LS bypoll is caused by the death of Dalpat Singh Paraste who won the seat in 2014, Nepanagar Assembly seat fell vacant due to the demise of Rajendra Shyamlal Dadu in an accident, both from the BJP.

The BJP leaders exuded confidence of retaining both the ST seats with comfortable margins, claiming that the currency scrapping will not affect the party's prospects.

The Congress, however, said the move will hit the ruling party "badly" in the polls.

"People are highly annoyed with the decision and I am sure that they will vote against BJP on the issue," MP Congress chief Arun Yadav said.

"People are facing grave problems with this dictatorial order. Both common man and farmers were forced to stand in long queues. Farmers are not having money to purchase fertilisers and seeds," he claimed.

Rejecting the Congress's contention, BJP leader Hitesh Bajpai said demonetisation is not an issue in the tribal-dominated area.

"They are more concerned with issues of getting land lease rights, their staple food is rice and jowar and they are happy with it," he said.

"The party had won the Shahdol seat with a margin of over two lakh votes and I am sure that we will retain it with a difference of more than 1.5 lakh ballots," he said.

Chouhan has frequented Shahdol to ensure that the BJP retains the seat. He is taking no chances since the BJP failed to retain the Ratlam-Jhabua Lok Sabha seats in the by-polls held in November last year.

A number of other candidates are also in the fray in both the seats.

In Nepanagar, besides Congress and BJP, Republican Party of India (A) (Revanta) and Lok Janshakti Party (Ber Singh) have also fielded candidates.

By-elections are being held in two Lok Sabha constituencies and one Assembly constituency in West Bengal on Saturday under the shadow of the Centre's demonetisation decision.

The by-elections are being held in Cooch Behar and Tamluk Lok Sabha constituencies and in Monteswar Assembly constituency. Ruling Trinamool Congress, BJP, Left Front and Congress have fielded their candidates in all three seats.

Although the Congress and CPI(M)-led Left Front had contested the Assembly polls held earlier this year, the two decided to part company in this round of by-elections.

TMC MLA and party candidate from Tamluk seat Dibyendu Adhikari told PTI, "Demonetisation move has affected every citizen of this country. The common man is suffering. Demonetisation has also impacted our campaign as we are unable to pay the decorators, sound organisers. In Tamluk, most of the rural areas still don't have proper banking facilities, what will the poor farmers do?" he asked.

According CPI(M) and Congress leaders, demonetisation has all of a sudden come up as an issue for the polls as they are receiving feedback that people are inconvenienced due to the new decision.

CPI(M) leader Sujan Chakraborty said demonetisation became a prominent issue as the people faced huge problems and added that the situation was much worse in rural areas.

The BJP, on the other hand, said that by-elections would be a litmus test for political parties.

"What TMC, Congress and CPI(M) are saying is not right. People of Bengal are happy with the decision and will give a hands down victory to our candidates," state BJP president Dilip Ghosh said.

"It's not a question of black money or white money. All of a sudden if you scrap high value notes how will you meet various expenditures for the campaign," Congress candidate from Monteswar Bulbul Ahmed Sheikh said.

By-election in Cooch Behar was necessitated by the death of TMC MP Renuka Sinha while the by-election in Tamluk in East Medinipur district was caused by the resignation of TMC MP Suvendu Adhikari who also won the Assembly poll and joined the state cabinet as transport minister.

The bypoll to Monteswar Assembly seat in Burdwan district is due to death of TMC MLA Sajal Panja.

DNA: Will Godse be honored by insulting Gandhi?