Chhath, celebrated six days after Diwali, is dedicated to the Sun god. 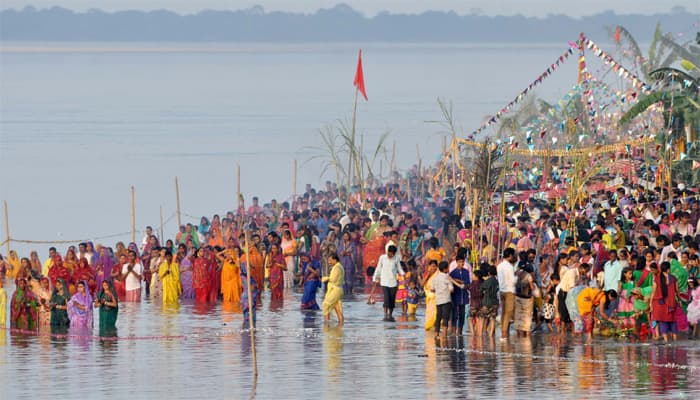 Patna: The four-day Chhath festival, one of the most popular and biggest in Bihar, began early Sunday as hundreds of thousands of devotees thronged the river banks to take bath before preparing traditional food.

Chhath, celebrated six days after Diwali, is dedicated to the Sun god. During the festival, married women observe a fast for 36 hours and devotees offer wheat, milk, sugar cane, bananas and coconuts to the Sun.

The banks of rivers like the Ganga, Punpun, Gandak and Kosi as well as other big and small water bodies were crowded. Devotees were busy preparing food on earthen 'chulhas' (fireplaces).

A woman devotee, Sanju Devi said: "We use dry woods from mango trees and bamboo baskets for cooking the traditional meal of boiled rice and pumpkin on the first day of Chhath."

Mahua Devi, another devotee dressed in a new cotton sari, said: "We first took bath to clean ourselves before preparing food to mark the beginning of the Chhath festival."

She said the "ritual of Nahai-Khai -- preparation of traditional food -- is a symbol of purity and strict discipline during the next phase of the festival".

A devotee is a 'varti' -- the one who performs the prayers and follows other rituals.

On Monday, another ritual - Kharna - will be observed. It is followed by offering arghya (water) to the Sun on the next day.

It is a festival of faith, purity and devotion to the Sun god. Colourful idols of the Sun god riding a chariot drawn by seven horses, were sold on the riverbanks. They were cleaned and decorated by the devotees.

The administration along with dozens of voluntary organisations worked round-the-clock to clean the roads leading up to the banks of the rivers and water bodies.

District authorities have declared some 'ghats' as unsafe and dangerous. There are over 72 ghats along the Ganga in Patna.

"All district magistrates were directed by Chief Minister Nitish Kumar to accord top priority to the safety of the devotees," an official said.

Over the years Chhath is being closely identified with Bihar -- along the lines of Bihu in Assam, Pongal in Tamil Nadu and the Ganesh festival in Maharashtra.

MCD Result: Can Delhi have a BJP Mayor despite AAP Victory?

MCD Result: 'Mayor will be from AAP only', says Raghav Chadha

SRK to star with Rakshit and Rishabh Shetty in next Hombale movie? | Zee News English