Florida, which is facing its most dangerous storm in living memory, can expect Hurricane Matthew to move near or over the coast overnight. 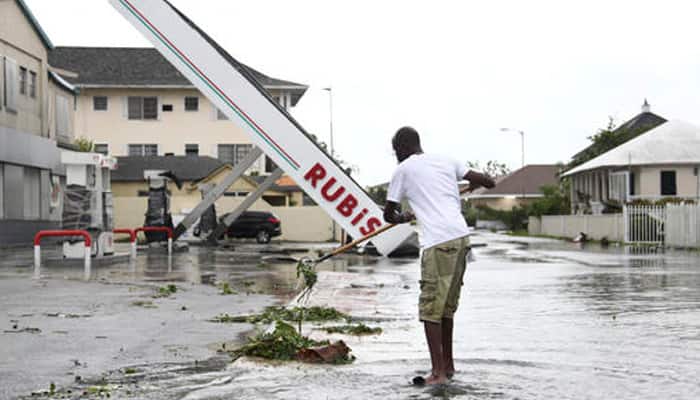 Marco Beckford rakes up debris from a storm drain as he begins cleanup near a damaged gas station in the aftermath of Hurricane Matthew in Nassau, Bahamas, on October 06, 2016.
Share:
Updated:
Oct 07, 2016, 12:38 PM IST
Source:
AFP

Florida: Hurricane Matthew was downgraded to a Category Three storm Friday as it churned just off Florida and threatened to pummel the US southeast after wreaking havoc in the Caribbean.

Florida, which is facing its most dangerous storm in living memory, can expect Matthew to move near or over the coast overnight, the Miami-based National Hurricane Center reported.

It downgraded the storm to a still-powerful Category Three, on a scale of five, and said it would remain as such as it moved near the state`s coast, with some additional weakening over the next 48 hours.

The eye of the "extremely dangerous" hurricane was moving closer to Florida and was expected to be near or over the coasts of Georgia and South Carolina on Saturday, the NHC said.

Wind gusts of up to 70 miles per hour had been reported in the city, while the eye of the storm was producing maximum sustained winds of 120 mph.

Hurricane conditions were expected to reach Florida over the next several hours, with life-threatening flooding during the next 48 hours from Florida to southern North Carolina.

Some six to 12 inches (15 to 30 centimeters) of rain were expected in the same areas, with isolated totals near 15 inches.

Before arriving off the US coast, Matthew cut a deadly swath across the Caribbean, leaving more than 300 dead in Haiti -- according to a senator from the hard-hit south of the country -- as a Category Four storm.

Only a handful of hurricanes of this strength have ever made landfall in Florida, and none since 1898 has threatened to scythe its way north along the low-lying, densely populated coast into Georgia and beyond.

Adani Group's big statement, will return the loan of 9 thousand 200 crores before 2024

Turkey and Syria shook by earthquake