Soon after Benjamin posted the video, PUMA has responded and assured cricketers help with cricket bats and related equipment.

After former West Indies cricketer Winston Benjamin's video went viral on the internet in which he is financial help for cricket kits for emerging cricketers, sports wear brand PUMA India has extended support to young Caribbean cricketers. Benjamin, who made his Test debut against India in 1987-88, played 21 Tests and 85 One-Day Internationals in his career. Currently, he has been coaching school kids in Antigua. Benjamin had made an appeal via an Indian cricket journalist Vimal Kumar's YouTube channel.

Soon after Benjamin posted the video, PUMA has responded and assured cricketers help with cricket bats and related equipment.

"We hear you, Winston. Let’s get these kids padded up," PUMA tweeted in response to a viral social media post of Benjamin. 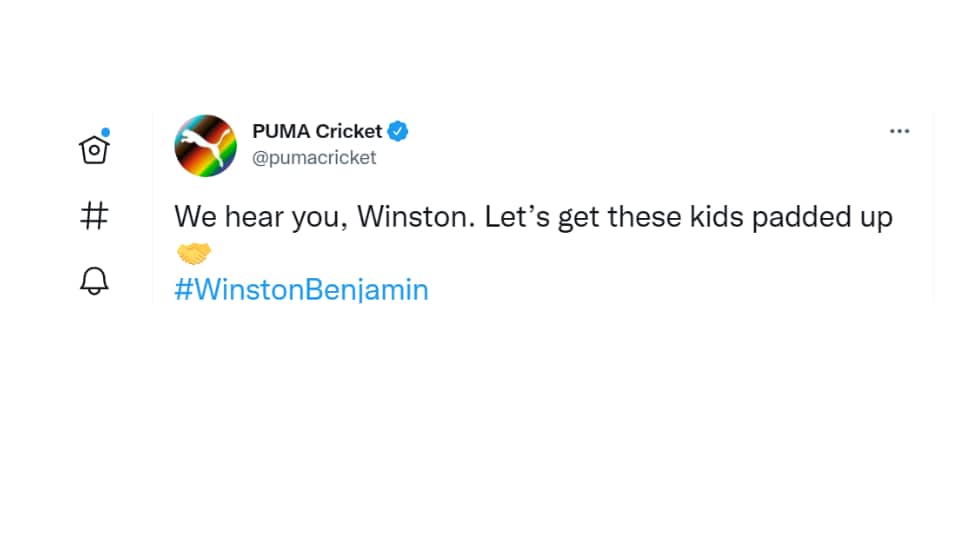 In 2021, PUMA won hearts when they supported Zimbabwe’s left-handed batsman Ryan Burl and his teammates with brand new shoes after the batsman had tweeted a heartbreaking photo of his ripped shoes and asking for help.

Cricketers in most under developed or developing cricketers suffer due to financial crisis and such acts could be seen as a way of uplifting those who are good at the sport but cannot move further in their careers due to financial constraints. International Cricket Council is doing its bit to spread the sport of cricket across the world but because the sport involves lots of equipment and facilities to learn and grow, more needs to be done in this regard. Cricket is an expensive sport and hopefully cricket boards come forward to make it more universal by making it more accessible sport for all.