Have decided to make a fix on the newly-launched Mahindra Scorpio-N but cannot decide on which variant to settle down with? Here’s the variant breakdown of the new Mahindra SUV.

The 2022 Mahindra Scorpio-N is finally launched in the country. Yes, it indeed was the most-awaited launch for the Indian market this year. After all, the Scorpio nameplate was celebrating its 20th anniversary in the Indian market. The D-segment, ladder-frame SUV is now introduced in its 3rd-gen avatar with an all-new chassis, body shell, exterior design, and cabin. Of course, the Scorpio-N gets a new variant line-up as well. There are a total of 5 variants on offer this time - Z2, Z4, Z6, Z8,  and Z8L. While the prices of all the variants are announced, Mahindra has also announced feature lists of these variants. So read on to find out which one fits your bill.

The base-spec Z2 trim is the entry point to the Mahindra Scorpio-N’s range. Priced at Rs 11.99 lakh and Rs 12.49 lakh for petrol and diesel trims, respectively, the Scorpio-N’s base-spec model is pretty-loaded. It comes with features like LED DRLs, LED tail lamps, 2nd-row AC vents, a touchscreen infotainment unit, and steering-mounted audio controls. The turbo-petrol motor on the Z2 variant belts out 203 PS, while the oil burner is offered in a lower state of tune, belting out 132 PS only. 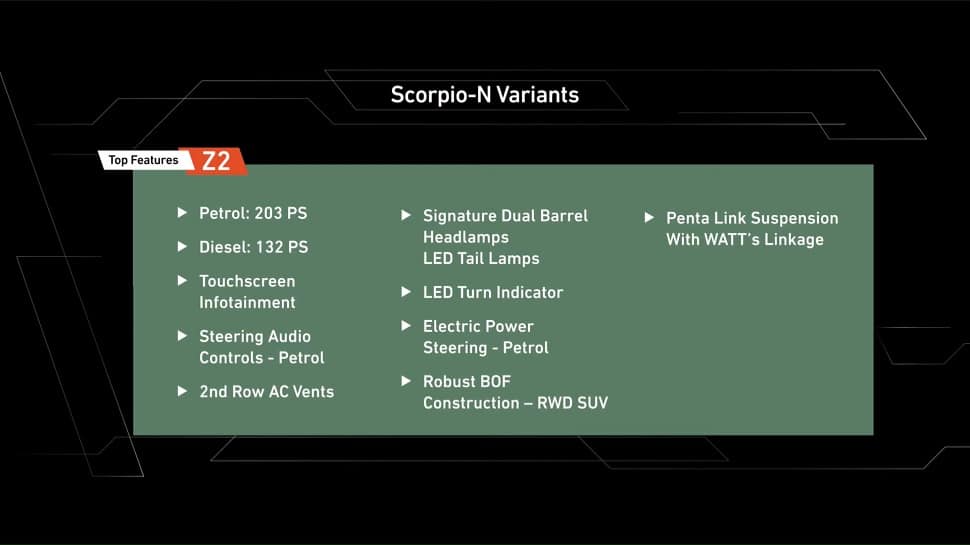 Next up on the list is the Z4 variant, which is priced from Rs 13.49 lakh onwards if bought with the turbo-petrol motor. With the oil burner, it comes at Rs 13.99 lakh. Over the Z2 trim, the Z4 comes with some additional features - a larger 8-inch touchscreen infotainment unit, cruise control, Android Auto and Apple CarPlay compatibility, ESC, Hill hold control, hill descent control, and 2nd-row AC module. Moreover, if you buy the diesel-auto configuration, it puts out 175 PS. In fact, the Z4 trim offers the option of a 4X4 drivetrain. 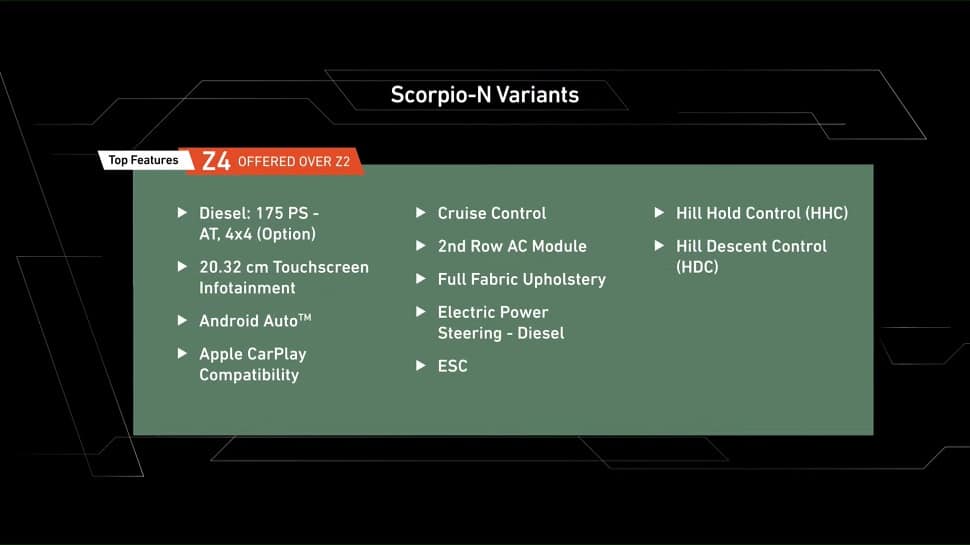 As of now, Mahindra has only announced the pricing of the Z6 variant of the Scorpio-N with the diesel engine only - Rs 14.99 lakh. In addition to the features offered in Z4 trim, it comes with an anti-pinch sunroof, driving modes, AdrenoX compatibility, drive modes, and wireless Android Auto and Apple CarPlay. 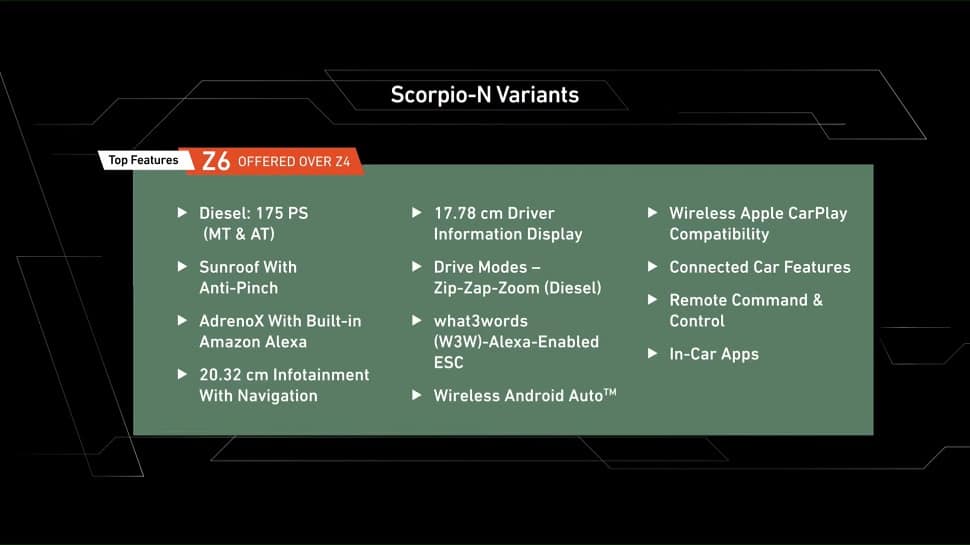 The Z8 trim is priced from Rs 16.99 lakh onwards, and it has some extra features over the Z6 variants. The Mahindra Scorpio Z8 comes equipped with leatherette upholstery, 4XPLOR terrain management system, dual-zone climate control, rear parking camera, 17-inch alloy wheels, and side and curtain airbags. 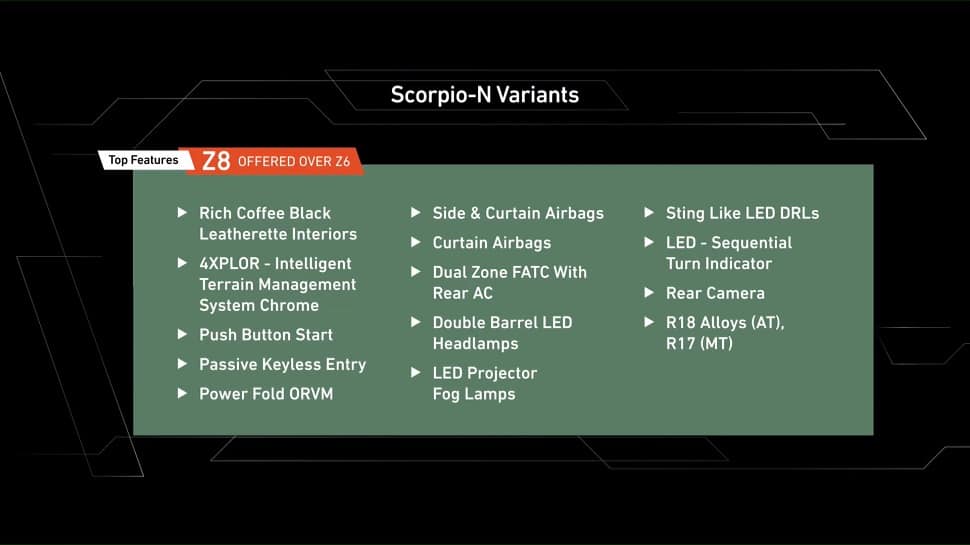 The range-topper in the Scorpio-N range is the Z8L trim. It is priced at Rs 18.49 lakh for the turbo-petrol trim and at Rs 19.49 lakh for the diesel-manual version. In addition to all the features that the Z8 trim comes with, the Z8L gets a host of extra features over them. The list includes wireless phone charging, front parking sensors, driver drowsiness detection, a front parking camera, and a 12-speaker Sony surround sound system. 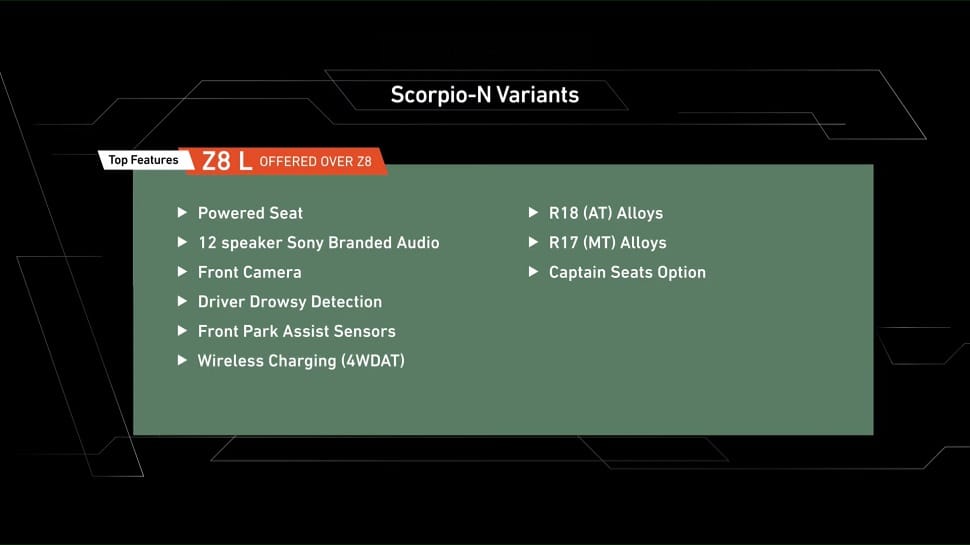