According to World Health Organization, the majority of new cases of monkeypox, around 86%, have been recorded from the WHO European Region.

New Delhi: The monkeypox disease continues to spread as the World Health Organization (WHO) has confirmed 1,310 fresh cases in eight new countries, taking the total cases worldwide to 3,413. "Since January 1 and as of June 22, 2022, 3,413 laboratory-confirmed cases and one death have been reported to WHO from 50 countries/territories in five WHO Regions," the global health body said in a statement on Monday (June 27).

"Since the previous Disease Outbreak News of June 17 was published, 1,310 new cases have been reported and eight new countries have reported cases," the WHO said. 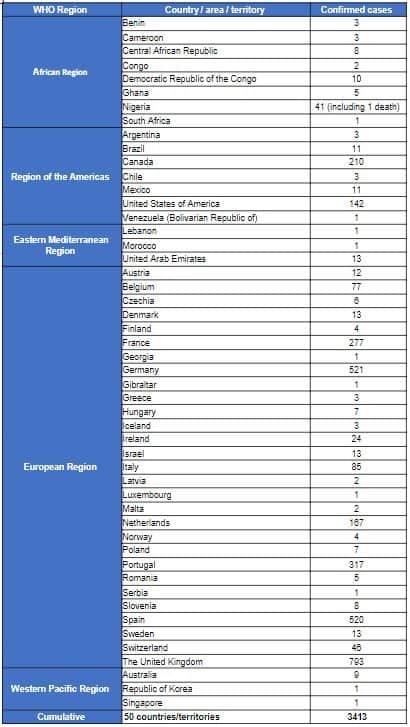 One death was also recorded in Nigeria in the second quarter of 2022, the WHO said.

During gatherings, close, prolonged & frequent contact with people could lead to the spread of the #monkeypox virus.

Know the risks & follow precautionary measures to  the risk of transmission.

WHO advice for gatherings during the outbreak:
https://t.co/C67ELbuneg pic.twitter.com/LgBwOGPoCq — World Health Organization (WHO) (@WHO) June 28, 2022

The UK Health Security Agency (UKHSA) on June 28 said that as of Sunday 26 June, there are 1,076 confirmed cases of monkeypox in the UK.

"The monkeypox outbreak in the UK continues to grow, with over a thousand cases now confirmed nationwide. We expect cases to continue to rise further in the coming days and weeks," Sophia Makki, Incident director at UKHSA said.

Currently, the majority of cases in the UK have been in men who are gay, bisexual or have sex with men. However, anyone who has had close contact with an individual with symptoms is also at increased risk.

"If you are attending large events over the summer or having sex with new partners, be alert to any monkeypox symptoms so you can get tested rapidly and help avoid passing the infection on," Makki added.

Actual number of monkeypox cases likely to be underestimated

The WHO said that the actual number of monkeypox cases is likely to be underestimated, in part due to the lack of early clinical recognition of an infection previously known in only a handful of countries, and limited enhanced surveillance mechanisms in many countries for a disease previously ‘unknown’ to most health systems.

"Health care-associated infections cannot be ruled out (although unproven to date in the current outbreak). There is a potential for increased health impact with wider dissemination in vulnerable groups as the mortality was previously reported as higher among children and young adults, and immunocompromised individuals, including people living with uncontrolled HIV infection, are especially at risk of severe disease," it said.

The International Health Regulations (2005) Emergency Committee met on June 23 regarding the multi-country monkeypox outbreak to advise WHO Director-General Tedros Adhanom Ghebreyesus on whether it constituted a Public Health Emergency of International Concern (PHEIC) and said that the outbreak should not constitute a PHEIC at this stage. The Committee, however, acknowledged the emergency nature of the event and that controlling the further spread of this outbreak requires intense response efforts.

The IHR Emergency Committee for multi-country #monkeypox outbreak advised the WHO DG that the event, currently, does not constitute a Public Health Emergency of International Concern (PHEIC). @DrTedros accepted the Committee’s advice.

They advised that the event should be closely monitored and reviewed after a few weeks, when additional information about the current unknowns (incubation period, the role of sexual transmission, etc.) becomes available, to determine if significant changes have occurred that may warrant a reconsideration of their advice.

What are symptoms of monkeypox disease?

Monkeypox typically presents itself with fever, rash, and swollen lymph nodes and may lead to a range of medical complications. The disease is usually self-limiting with the symptoms lasting from two to four weeks. Severe cases can also occur. In recent times, the case fatality ratio has reportedly been around 3-6 per cent but can be up to 10 per cent. There are no reported deaths in this current spread.

How does monkeypox virus spread?

Monkeypox is transmitted to humans through close contact with an infected person or animal, or with material contaminated with the virus. It reportedly is spread by rodents such as rats, mice, and squirrels.

The monkeypox disease is transmitted through lesions, body fluids, respiratory droplets, and contaminated materials such as bedding.

The #monkeypox outbreak is an evolving health threat. To stop the further spread of the virus, @WHO has issued a series of guidance and recommendations for governments, health professionals and the public. Here is the latest one on gatherings: https://t.co/Z6HvZYzJP8

The virus, however, is said to be less contagious than smallpox and causes less severe illness.

How are monkeypox patients treated?

DNA Video
DNA: How Swastika got linked to Hitler?

DNA Video
DNA: When will Kashmiri Pandits get freedom from fear?

DNA Video
DNA: When will decisive battle against familism happen?

DNA Video
DNA: What are the side effects of family-based parties?