Nadal has won both of this year's major titles so far, including the French Open and Australian Open, but his ranking is hurt by his lack of activity over the past 12 months.

Rafael Nadal's 14th French Open title, and 22nd Grand Slam trophy overall, lifted him one place to No. 4 behind top-ranked Novak Djokovic in the latest ATP rankings. Nadal beat Djokovic in the quarterfinals along the way to the final, where he overwhelmed Casper Ruud 6-3, 6-3, 6-0 on Sunday (May 5) and became, two days after his 36th birthday, the oldest man to win the singles championship at Roland Garros — all despite needing pain-killing injections for a chronic problem in his left foot.

Nadal has won both of this year's major titles so far, including the Australian Open in January, but his ranking is hurt by his lack of activity over the past 12 months. He played only two matches between the end of the 2021 French Open and the end of last season because of that foot, then missed more time this year because of that issue and a rib injury.

Ruud went up to a career-best No. 6 from No. 8 by reaching his first Grand Slam final. 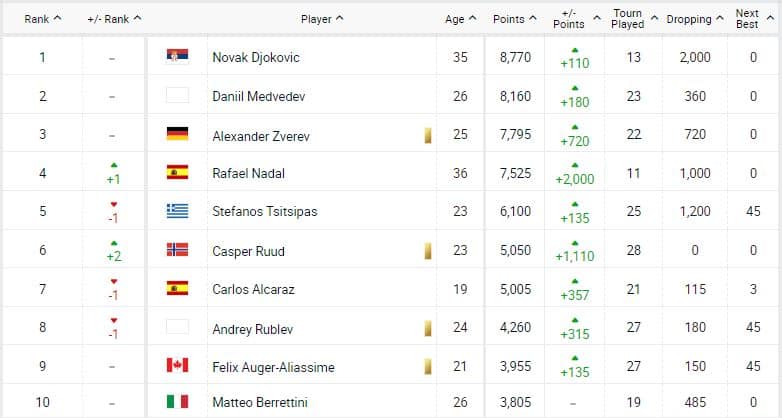 Meanwhile, American teenager Coco Gauff rose to a career-best No. 13 in the WTA rankings on Monday after her runner-up finishes to No. 1 Iga Swiatek at the French Open.

Gauff, an 18-year-old from Florida, jumped 10 spots by getting to her first Grand Slam final before losing to Swiatek 6-1, 6-3 on Saturday. Gauff had never been past the quarterfinals at a major tournament. She made it to the finals of singles and doubles at Roland Garros.

Her doubles partner, Jessica Pegula, moved into the singles top 10 for the first time, going from No. 11 to No. 8, thanks to her run to the quarterfinals. Like Gauff, the 28-year-old from New York lost to Swiatek, who has now won her past 35 matches in a row.

these past two weeks have been filled with so many emotions and i am so grateful for this moment. thank you to everyone for all of the support.
grand slam finalist….
i’ll bounce back.

ps: tournament is not quite over for me yet… doubles final tomorrow allezzzz pic.twitter.com/3cGCVh19Sa — Coco Gauff (@CocoGauff) June 4, 2022

Last year's French Open champion in singles and doubles, Barbora Krejcikova, lost in the first round of singles this time — only the third woman in the professional era to exit in the first round at Roland Garros a year after earning the trophy — and dropped from No. 2 in the rankings to No. 14. She pulled out of the doubles event two days later, saying she tested positive for COVID-19.

The French Open's effect on the rankings for both the WTA and ATP will hold sway longer than usual, because the two professional tours have announced they will not award points this year for Wimbledon, which starts on June 27.

That was in response to the All England Club's decision to bar players from Russia and Belarus from the grass-court Grand Slam tournament because of the invasion of Ukraine.