'The greatest of all time', Virat Kohli reacts to Roger Federer's retirement announcement

Former Indian cricket captain and star India batter Virat Kohli was one of those athletes who looked up to Federer for inspiration.

Tennis legend Roger Federer will bring an end to his tennis playing career next week after the conclusion of Laver Cup in London. The 20-time Grand Slam champion announced on Thursday (September 15) that was he was going to retire and the Laver Cup would be his last ATP Tour event. Since the news came out, fans have taken to social media to pour their heart out, writing farewell notes and revisiting memories of Federer's wins. The champion player was not just known for his trophy collection but also the grace with which he carried himself.

Former Indian cricket captain and star India batter Virat Kohli was one of those athletes who looked up to Federer for inspiration. He has met him a few times as well and every time he met he looked like a fan boy. Kohli too commented on Roger Federer's Instagram post. He wrote in the comments section: 'The greatest of all time. King Roger'. He also dropped heart emojis to reflect his love and respect for the outgoing tennis legend.

Check out his reaction below. 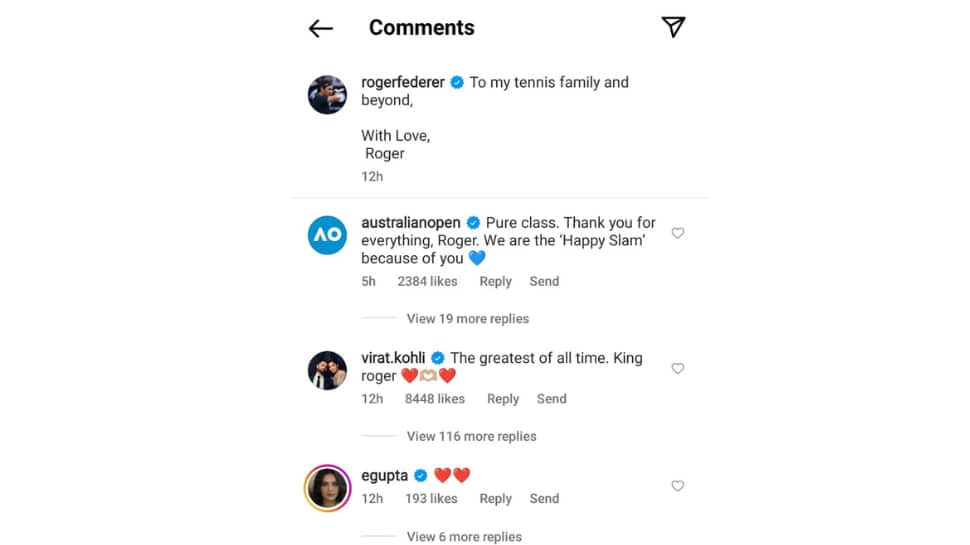 One of Federer's longest rival and friend Rafael Nadal too shared his thoughts on his retirement, calling it a sad day for him and for the sports fans globally.

This is what Nadal wrote for Federer: Dear Roger, my friend and rival. I wish this day would have never come. It’s a sad day for me personally and for sports around the world.
It’s been a pleasure but also an honor and privilege to share all these years with you, living so many amazing moments on and off the court. We will have many more moments to share together in the future, there are still lots of things to do together, we know that."

For now, I truly wish you all the happiness with your wife, Mirka, your kids, your family and enjoy what’s ahead of you. I’ll see you in London."