Ankita Lokhande and Vicky Jain are all set to get married today and the duo had a lavish sangeet ceremony ahead of their wedding which was attended by several biggies of the industry including Kangana Ranaut.

New Delhi: Bride-to-be Ankita Lokhande is all set to marry her longtime boyfriend Vicky Jain on December 14, which is today and so the duo is leaving no stone unturned in order to make their day even more special.

On Monday, Ankita and Vicky had their lavish sangeet ceremony which was attended by many biggies of the industry.

Ankita’s co-star from Manikarnika: The Queen on Jhansi, Kangana Ranaut was also seen gracing the event and also blessed the soon-to-be-married couple. She even shared pictures of the occasion on her social media account. 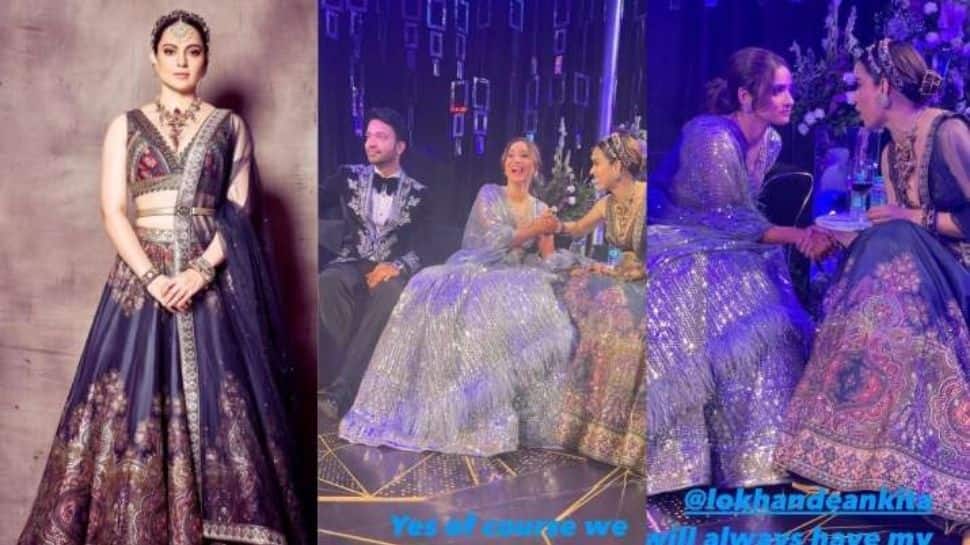 Both the friends were seen chit-chatting with each other and also enjoyed the dance performances done by the family and friends for them. Their videos have gone viral on social media as many fanpages have shared them on their Instagram pages.

For the occasion, Ankita opted for a silver shimmery lehenga while Vicky wore a black jacket with coordinated silver embroidery and pants.

Kangana was seen in a royal purple lehenga with a matching dupatta and she completed her look with heavy jewellery.

While prepping for her wedding festivities this month, the actress had injured her leg and was advised rest by the doctors. She even shared the picture of her sprained leg in her social media post.

Despite injury, Ankita can be seen dancing her heart out. Her videos from the fun-filled celebrations are going viral on social media.

For the unversed, Ankita and Vicky have been dating for more than 3 years now and never miss a chance to woo their fans with their adorable posts.

Vicky Jain has always stood like a rock through Ankita’s thick and thin.

Ankita shot to fame through her popular TV show ‘Pavitra Rishta’ which also starred her ex-boyfriend and late actor Sushant Singh Rajput. She has also worked in shows including- ‘Ek Thhi Naayka’ and ‘Shakti - Astitva Ke Ehsaas Ki’ to name a few.

She made her Bollywood debut with ‘Manikarnika: The Queen of Jhansi’ and was later seen in a supporting role in ‘Baaghi 3’.