Xiaomi all set to launch Mi 10i in India: Livestreaming, expected price, features and more

The phone will be livestreamed on Xiaomi's official youtube channel.

New Delhi: Chinese smartphone manufacturer Xiaomi is all set to launch the Mi 10i in India on Tuesday. The phone will be launched at 12 pm on various social channels of the company. Xiaomi India has tweeted:

The phone will be livestreamed on Xiaomi's official youtube channel.

The phone will be priced below Rs 30,000 range, company's Global VP Manu Kumar Jain has tweeted: "Time to light up the thunder and bring along the best of the tech with best of "10" for India. Mi fans trust me, #Mi10i will be one of the best, if not the BEST device under 30K! Smiling face with heart-shaped eyes Excited for tomorrow's launch," he tweeted. 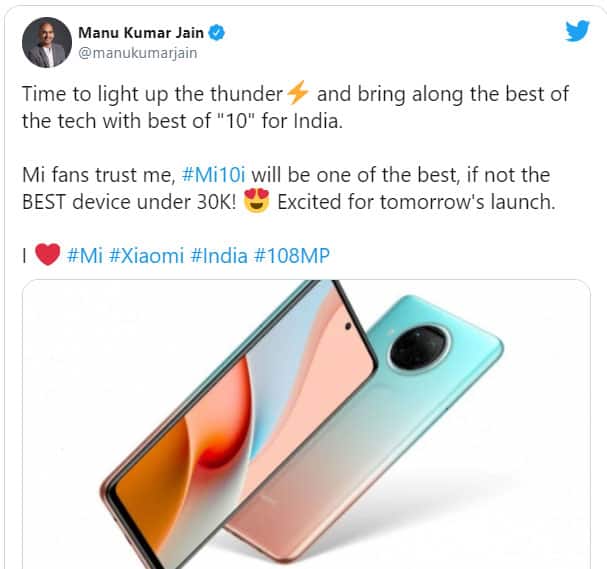 Media reports say that the Mi 10i is a rebranded version of the Redmi Note 9 Pro 5G. For the Indian market, as per the phone name goes, the i in the 10i stands for India. As per company and Jain's various tweets, it is confirmed that the phone will be launched in Pacific Sunrise and Midnight Black colour options. Among other specs reveal, the Xiaomi Mi 10i will pack a quad rear camera setup with a 108 MP primary senso, Snapdragon 750G SoC.