Shraddha Kapoor shares a 'Tight pappi' for her fans on Instagram on the occasion of Friendship Day.

New Delhi : Bollywood actress Shraddha Kapoor always finds a reason to connect with her fans on social media. On the occasion of Friendship Day, she took to her Instagram and shared a boomerang video of flying kisses. On the video, she wrote, "Tight pappi to my insta fam Happy Friendship Day!!!! "

The actress boasts of more than 73 million followers on Instagram and is the third most followed person from India after Virat Kohli and Priyanka Chopra. 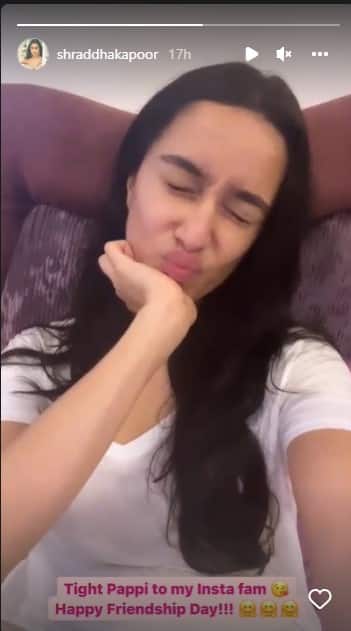 The actress made her debut in 2010 with 'Teen Patti' alongside Amitabh Bachchan. Since her breakthrough performance as Aarohi Keshav Shirke in Mohit Suri’s 'Aashiqui 2', the actress has been a part of several hits. She is known for her roles in 'Ek Villain', 'ABCD 2', 'Baaghi', 'Chhichhore', and many more. She was last seen in 'Baaghi 3' opposite Tiger Shroff.

On the work front, Shraddha Kapoor is gearing up for her upcoming film with actor Ranbir Kapoor which has been pushed to March 8, 2023. The film, directed by 'Pyaar ka Punchnama' fame Luv Ranjan is yet to get a title and is one of the most anticipated films of Bollywood. The movie will also mark Shraddha’s first-ever collaboration with Ranbir Kapoor.