Kiara took to her Instagram handle and penned a heartfelt birthday note for Shahid, who turned 41 on Friday. 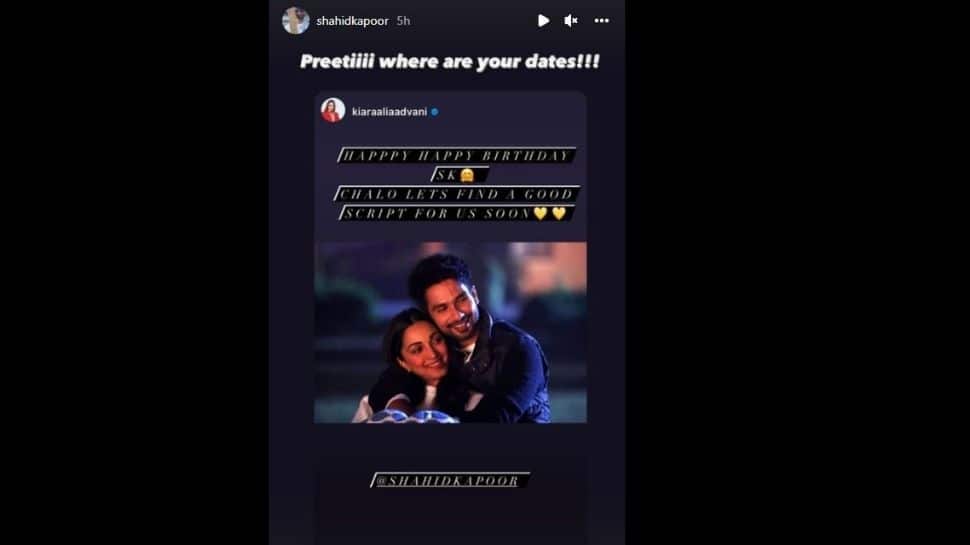 In the birthday note, Kiara shared a still from her and Shahid's hit romantic film 'Kabir Singh' and wrote "Happy happy birthday SK. Chalo let's find a good script for us soon."
Replying to Kiara, Shahid wrote, "Preetiii where are your dates!!!"

The fun chat between the two stars makes it obvious that the duo is ready to reunite for the silver screen if they find a good script.

For the unversed, 'Kabir Singh' was a massive success that brought Shahid and Kiara nationwide acclaim. In the film, the 'Haider' actor plays the role of Kabir, a short-tempered surgeon who goes on a path of self-destruction, consuming drugs and alcohol after not being able to marry the love of his life Preeti (Kiara).

'Kabir Singh' is the Hindi remake of the Telugu hit 'Arjun Reddy'. The original blockbuster starred Vijay Deverakonda and Shalini Pandey in the lead roles.

Helmed by Sandeep Reddy Vanga and produced by Bhushan Kumar, Murad Khetani, Krishan Kumar, and Ashwin Varde, the film was the highest-grossing movie of 2019.

Talking about Shahid's upcoming slate of projects, he will be next seen in the sports drama 'Jersey'. The film, also starring Mrunal Thakur, will hit theatres on April 14.

Apart from 'Jersey', Shahid has several other projects in the pipeline including his upcoming digital debut, a quirky thriller drama directed by Raj Nidimoru and Krishna DK, along with an untitled action film directed by Ali Abbas Zafar.

He also has 'Bull' in his kitty. The action film, directed by Aditya Nimbalkar, will arrive in cinemas in April 2023.

On the other hand, Kiara will be seen in the film 'Jug Jugg Jeeyo' alongside Varun Dhawan. The film also stars Anil Kapoor, Neetu Kapoor, Maniesh Paul and Prajakta Koli in lead roles and is slated to release on June 24, 2022.

She also has acclaimed director Shankar's 'RC15' in the pipeline. The film will also star South superstar Ram Charan in the lead.