Saba Azad praises Hrithik Roshan's performance in 'Vikram Vedha', says 'you make me so so proud'

On the work front, Hrithik Roshan will be next seen in director Siddharth Anand`s next action thriller film `Fighter` alongside Deepika Padukone.

Taking to Instagram, Saba shared a picture on his story and wrote, "Congratulations on an excellent performance to the most hard-working human I know - you make me so so proud Ro!!."

Here is the picture shared by the actress: 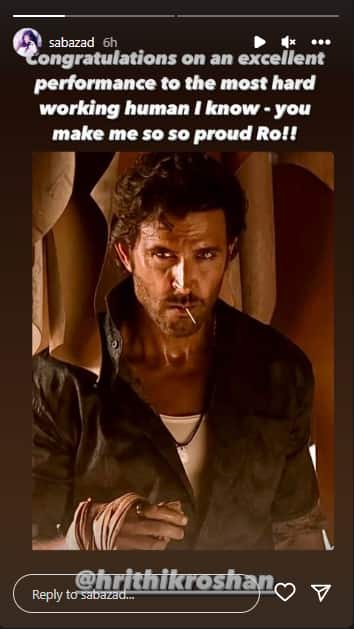 In another story, Saba shared a picture of `Vikram Vedha` and wrote, "Congratulations to team #vikramvedha for a super engaging film - iv seen is twice and Im gonna see it again...and again!!." 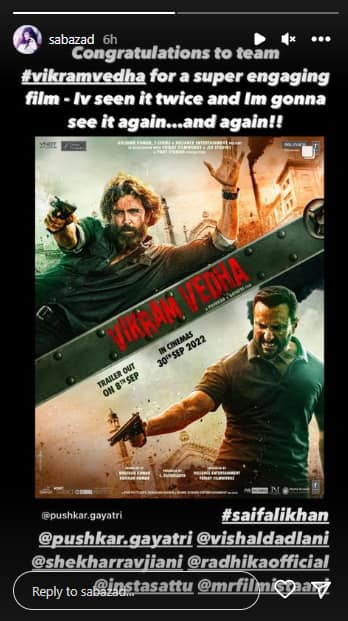 The rumours about Hrithik and Saba started when they were spotted out on a dinner date together in February. Later, Saba also joined Hrithik`s family for a get-together. However, Hrithik and Saba have been making the headlines since they first appeared together at producer Karan Johar`s 50th birthday party.

Helmed by Pushkar and Gayatri `Vikram Vedha` also starred Saif Ali Khan and Radhika Apte in the lead roles and is currently receiving positive responses from the audience.

The story of `Vikram Vedha` is full of twists and turns, as a tough cop Vikram (Saif Ali Khan) sets out to track and chase a dreaded gangster Vedha (Hrithik Roshan). What unfolds is a cat-and-mouse chase, where Vedha - a master storyteller helps Vikram peel back layers through a series of stories leading to thought-provoking moral ambiguities.

Meanwhile, Hrithik will be next seen in director Siddharth Anand`s next action thriller film `Fighter` alongside Deepika Padukone. Saba, on the other hand, Saba is a multi-talented actor and singer. She was a part of many noteworthy Bollywood films like `Detective Byomkesh Bakshi`, `Shaandaar`, and `Karwaan` and she will be next seen in the film `Songs of Paradise`