Lankan beauty Jacqueline Fernandez has been named as an accused in the Rs 215 crore extortion case involving conman Sukesh Chandrashekhar.

NEW DELHI: Actress Jacqueline Fernandez, who has been named as an accused by the Enforcement Directorate in the Rs 215 crore extortion case involving conman Sukesh Chandrasekhar, has shared an inspirational note on social media, expressing hope and confidence in herself. Jacqueline, who was last seen in Kannada action-thriller 'Vikrant Rona', has been in the news lately for her alleged involvement in Sukesh Chandrasekhar money laundering case.

Chandrashekar, who is accused of extorting Rs 205 crore from former Ranbaxy owner's wife Aditi Singh on the pretext of helping her husband come out of jail, is said to have splurged money on the actress and her family. Meanwhile, Jacqueline, addressing herself as 'Dear Me' in her Instagram post, wrote, "Dear me, I deserve all good things, I'm powerful, I accept myself, it'll all be okay. I'm strong, I will achieve my goals and dreams, I can do it." 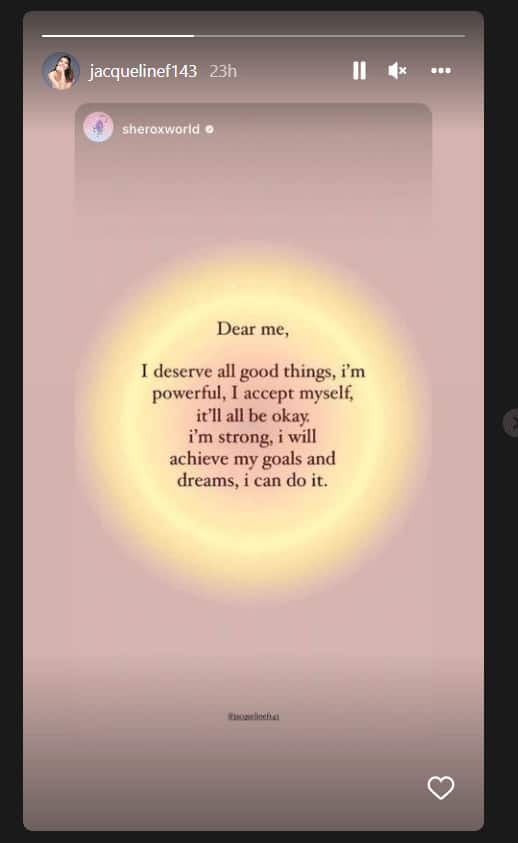 A Delhi court will consider on August 31 a supplementary chargesheet filed by the Enforcement Directorate on August 17 in a Rs 200 crore money laundering case involving alleged conman Sukesh Chandrashekar, naming actress Jacqueline as an accused.

Jacqueline, who was summoned by ED several times in the matter for investigation, has been named as an accused in the chargesheet for the first time in the case. ED's earlier chargesheet and one supplementary chargesheet did not mention her name as an accused. The documents, however, had mentioned the detail of the statement recorded by Jacquline and Nora Fatehi in the matter.

Additional Sessions Judge Praveen Singh posted the matter for August 31 on the issue of taking cognisance of the supplementary chargesheet in the case.

Statements of Nora were recorded on September 13 and October 14, 2021, wherein she stated that she had received gifts from Chandrashekar and his wife and actress Leena Paulose.

As per reports, a horse worth Rs 52 lakh and a Persian cat worth Rs 9 lakh were among gifts worth Rs 10 crore given by the conman to Jacqueline, Enforcement Directorate sources have said. The 36-year-old actor, in her statement recorded by the Enforcement Directorate last year, had said she received Gucci and Chanel designer bags and clothes, and a bracelet of multi-coloured stones from Chandrashekar.

Jacqueline, a Sri Lankan national, made her debut in Bollywood in 2009. A total of eight people including Sukesh Chandrashekar and his wife Leena Paulose have been arretsed in the case.