Priyanka Chopra shares her joy as New York declares public holiday on Diwali from next year!

Priyanka Chopra shared her joy as Diwali is announced as a public holiday in New York City public schools from next year.

New Delhi: Actor Priyanka Chopra, on Sunday, has reacted to the announcement that Diwali will be a holiday in New York City public schools from next year. Taking to her Instagram Stories, Priyanka reposted a video where the New York City Mayor announced that Diwali will be a public school holiday from next year. She said, "Today I`m proud to say our time has come, The time has come to recognize over 200,000 New Yorkers of the Hindu, Buddhist, Sikh and Jain faiths who celebrate Diwali, the Festival of Lights."

Alongside the video, she wrote, "After all these years! My teenage self-living in Queens is crying tears of joy. #representationmatters." 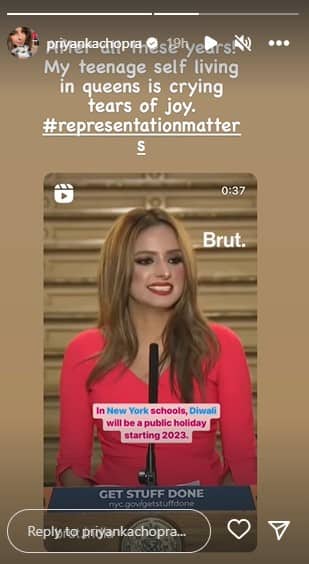 Talking about Priyanka`s schooling, she moved to US for her studies and attended schools in Newton, Massachusetts, and Cedar Rapids, Iowa, after Queens, New York. She returned to India after a few years and finished the senior year of her high-school education at the Army Public School in Bareilly.

Moving on to Priyanka`s work front, Priyanka will be seen in international projects such as `It`s All Coming Back To Me`, and the series `Citadel`. Produced by Russo Brothers, `Citadel` will hit the OTT on Prime Video. The upcoming sci-fi drama series is being directed by Patrick Morgan and stars Richard Madden alongside Priyanka. In Bollywood, she will be starring with Alia Bhatt and Katrina Kaif in Farhan Akhtar`s `Jee Le Zaraa`, which promises to be another tale of friendship following the lineage of `Dil Chahta Hai` and `Zindagi Na Milegi Dobara`, both of which have become cult classics over the years.