Priyanka Chopra shared a story on Instagram as she flew back to Los Angeles after a brief stint in India. Priyanka was in India to promote her haircare brand alongside a visit to some rural areas in Uttar Pradesh as a Goodwill Ambassador of UNICEF.

Mumbai: After her brief stint in India, Priyanka Chopra is off to Los Angeles. Priyanka shared a photo of herself on her Instagram story revealing that she is flying back to Los Angeles. Priyanka was in India to promote her haircare brand alongside a visit to some rural areas in Uttar Pradesh as a Goodwill Ambassador of UNICEF. On Monday, Priyanka visited Lucknow, Uttar Pradesh to see the work being done by UNICEF and its partners to end violence and discrimination against girls in the state. 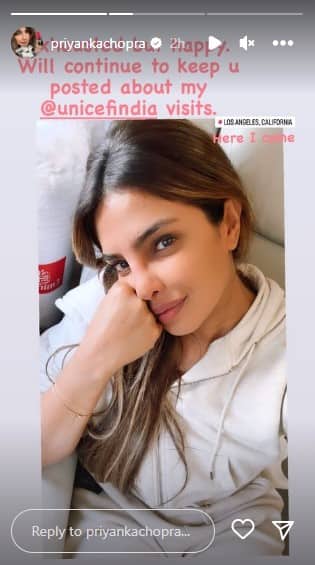 Priyanka also shared several images and videos of herself visiting several UNICEF centers. She visited Composite School Aurangabad in Lucknow where she met little boys and girls. She also visited `Anganwadi` in Lalpur. During her visit, Priyanka also praised CM Yogi Adityanath-led Uttar Pradesh government for its responsible attitude towards women and improvement in their condition in the state. She said, "during the last two days of the visit, I saw a big change here. In fact, Uttar Pradesh needed this change."

Priyanka also mentioned the positive change in violence against women in the state. She said that "I got an opportunity to visit the One Stop Center (Asha Jyoti Centre) here. Here I met and talked to many women victims of violence. "The actor further praised the schemes being run for the education of children as well as the schemes for the children who were orphaned during Covid. Along with this, Priyanka also appealed to take the schemes to needy people and make them aware of them.

Talking about movies, Priyanka will next be seen in international projects such as `It`s All Coming Back To Me`, and the series `Citadel`. Produced by Russo Brothers, `Citadel` will hit the OTT on Prime Video. The upcoming sci-fi drama series is being directed by Patrick Morgan and stars Richard Madden alongside Priyanka.