On the work front, Priyanka will be seen in international projects such as 'It`s All Coming Back To Me', and the series 'Citadel'.

Mumbai: Global Icon Priyanka Chopra on Tuesday extended her condolence over South Korea`s Halloween stampede. Taking to Instagram, Priyanka shared a note on her stories which she captioned, "Such a tragedy...revelry turns into a night of untold horrors with so many young lives lost."

She added, "Sending prayers and strength to families who lost their loved ones."The stampede took place on Saturday night and led to the death of at least 26 foreign nationals from 14 countries when crowds of people celebrating Halloween swelled in narrow alleys of Seoul`s popular nightlife district.The incident reportedly occurred when a large group of people rushed to an Itaewon bar after hearing an unidentified celebrity was visiting there, Al Jazeera reported citing the local media. Here is the post shared by Priyanka: 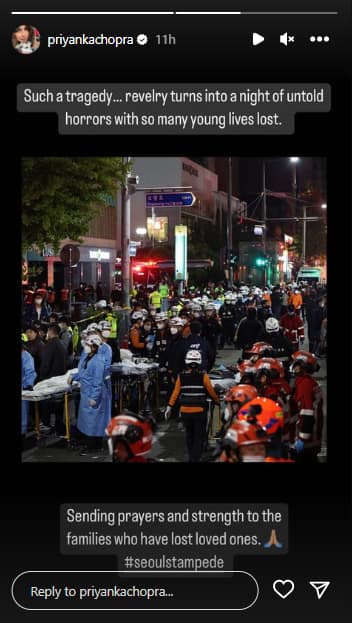 Social media footage showed several people being assisted by rescue officials and private citizens at the scene, and many rescue officials performing CPR on people lying in poor condition on the streets. The packed Halloween festivities in South Korea`s capital of Seoul took place after Covid restrictions were removed, the local officials said.South Korean President Yoon Suk Yeol has declared a period of national mourning.

In Bollywood, she will be starring with Alia Bhatt and Katrina Kaif in Farhan Akhtar`s `Jee Le Zaraa`, which promises to be another tale of friendship following the lineage of `Dil Chahta Hai` and `Zindagi Na Milegi Dobara`, both of which have become cult classics over the years.