Priyanka Chopra shared a photo of her walk with daughter Malti Marie and wrote, “Just two girls walkin’ 5th av.” She was seen taking the daughter for walk in a stroller.

New Delhi: Priyanka Chopra Jonas is currently enjoying and embracing the phase of motherhood in her life. The global star keeps posting pictures with her daughter Malti Marie Chopra Jonas as the two hangout together.

Recently, taking to her Instagram account, Priyanka shared a photo of her walk with daughter Malti Marie and wrote, “Just two girls walkin’ 5th av.” She was seen taking the daughter for walk in a stroller. 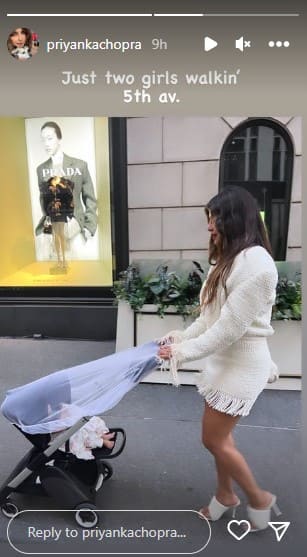 Looking at their matching outfits, while Priyanka donned a knitted white dress and left her hair open, little Malti can be seen dressed in a cute white dress as well. The actress keeps delighting her fans wih her pictures with daughter Malti Marie, however, she hasn’t revealed her face clearly.

Recently, Priyanka went to the UN General Assembly meet as UNICEF global ambassador where she talked about Sustainable Development Goals. Daughter Malti Marie also accompanied for the trip to the New York.

In Bollywood, she will be starring with Alia Bhatt and Katrina Kaif in Farhan Akhtar`s `Jee Le Zaraa`. It is expected to on floors around September 2022 and will be ready for release in the summer of 2023. It will also mark Farhan Akhtar’s return to the director’s chair after ‘Don 2’. She was last seen in Netflix film ‘The White Tiger’ alongside Rajkummar Rao and Adarsh Gourav.