Priyanka Chopra shared a new picture with daughter Malti Marie Chopra Jonas on her Instagram story. She captioned the post as 'My whole heart'.

Washington: Priyanka Chopra is currently enjoying the best phase of her life, motherhood. On Tuesday morning, she treated her fans to a new picture of her daughter Malti Marie.

In the image, Priyanka is seen tossing her little one into the air by holding her tightly. "My whole heart," she captioned the photo. 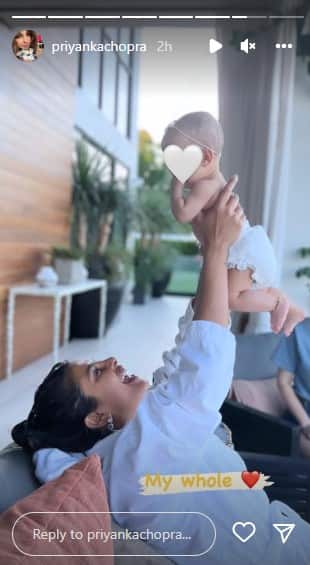 Priyanka and singer Nick Jonas got married in a Christian and a Hindu ceremony in Jodhpur`s Umaid Bhawan Palace on December 1 and 2 in 2018. Later, the couple also hosted two receptions in Delhi and Mumbai. In January 2022, the two announced that they welcomed daughter Malti Marie via surrogacy. Priyanka Chopra keeps sharing her pictures with daughter Malti Marie. However, she does not reveal her face in any of the photos.

In Bollywood, she will be starring with Alia Bhatt and Katrina Kaif in Farhan Akhtar`s `Jee Le Zaraa`, which promises to be another tale of friendship following the lineage of `Dil Chahta Hai` and `Zindagi Na Milegi Dobara`, both of which have become cult classics over the years. `Jee Le Zaraa` is reportedly going on floors around September 2022 and will be ready for release in the summer of 2023. It will also mark Farhan Akhtar’s return to the director’s chair after ‘Don 2’. She was last seen in Netflix film ‘The White Tiger’ alongside Rajkummar Rao and Adarsh Gourav.