Popular television actress Nia Sharma will be seen as a contestant in the latest season of the superhit reality dance TV show 'Jhalak Dikhhla Jaa'.

New Delhi: Television Nia Sharma was recently spotted outside the sets of Jhalak Dikhhla Jaa in Mumbai today, looking superfit and flaunting her killer abs. She was dressed in a neon vest that she paired with black joggers.

The actress started her career with the television series Kaali-Ek Agnipariksha, which ran between 2010 and 2011, and over the years she has played important characters in extremely popular soap operas such as 'Naagin', 'Ek Hazaaron Mein Meri Behna Hai' and 'Jamai Raja' which have also made her a household name in the country. 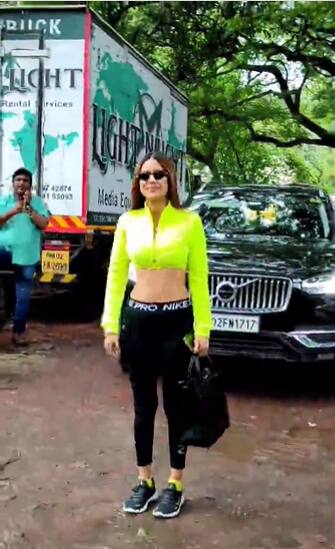 The actress will be appearing as a contestant in the latest season of the superhit dance reality TV show "Jhalak Dikhhla Jaa".

The show, which has enjoyed massive success and is one of the most popular reality television shows of all time, will make a triumphant return to television after a five-year hiatus.