Bollwood actress Sonam Kapoor who is married to businessman Anand Ahuja welcome a baby boy on 20th of August.

New Delhi: Sonam Kapoor has just become mum to a baby boy and the wishes haven't stopped since, be it from fans or other celebrities. From Neetu Kapoor to Karan Johar, they have extended their wishes to the actor. The actor is married to businessman Anand Ahuja.

Now, adding to that list, is the mother of two children herself and one of the most successful actors in B-Town, Kareena Kapoor.

The actress took to her Instagram account and shared a story where she wrote, "Congratulations to new parents @SonamKapoor @AnandAhuja" 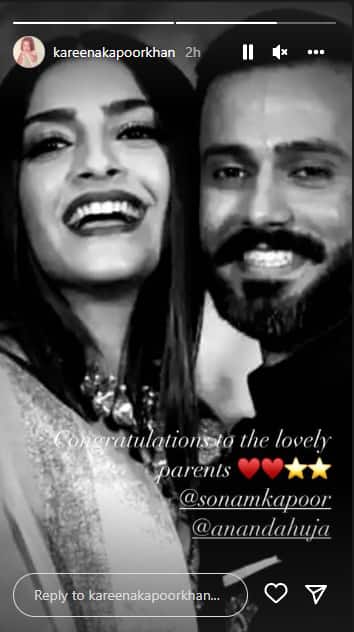 On the work front, Kareena, who was last seen in the big budget movie 'Laal Singh Chaddha' alongside Aamir Khan, has several projects in line up. It includes an untitled project with 'Kahaani' director Sujoy Ghosh, in which she will appear alongside actor Vijay Varma, who has received much praise for his role in the latest film "Darlings," and another untitled project with 'Scam 1992' creator Hansal Mehta.

Apart from this, the actor also has projects such as "Takht", a film which is being helmed by director Karan Johar and stars actors such as Vicky Kaushal and Ranveer Singh, and "Spirit," a movie starring South superstar Prabhas and which will be helmed by "Arjun Reddy' director Sandeep Reddy Vanga.