Kangana Ranaut clears the air about her strong views on little girl imitating a sex worker!

Kangana Ranaut is ready to come up with a different and never-seen-before reality show Lock Upp for the audience.

New Delhi: The Queen of Bollywood Kangana Ranaut is known for speaking her mind without mincing any words. The talented actress is coming up with a fearless reality show 'Lock Upp' with TV czarina Ekta Kapoor and that is already making the right kind of noise.

Kangana Ranaut is ready to come up with a different and never-seen-before reality show for the audience. Recently she took to her social media and posted about a child enacting Alia Bhatt's dialogue from Gangubai Kathiawadi film. 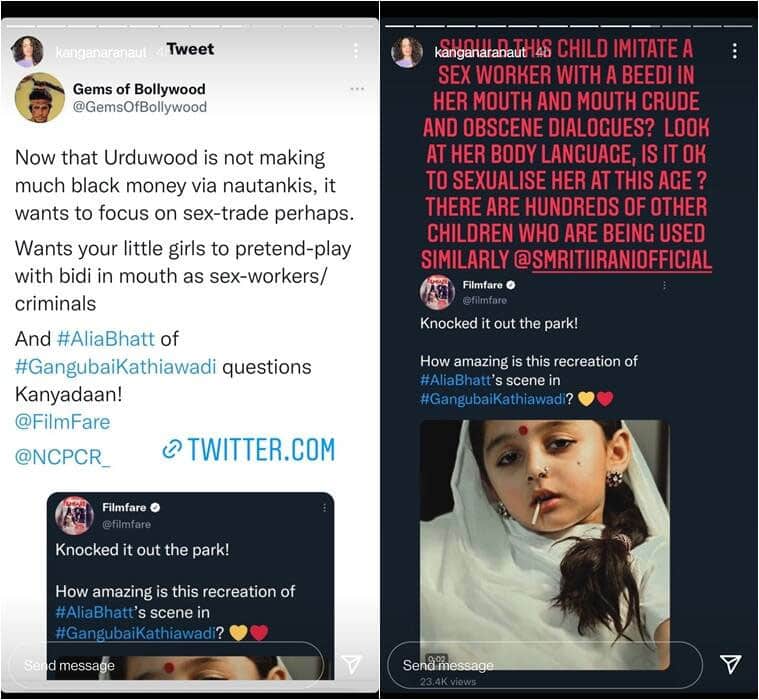 When asked about the same at the press conference she openly put out her opinion and said - "If I am talking about the kids of 6 to 7 years old, who are getting exploited, so I don't think it is to harm anybody, in terms of the business or money that they are going to make. It is in the interest of the girl children that were being exploited to imitate to do the TikTok videos or to imitate a sex worker with a beedi in her mouth. Social media should not only be used to use filters or put your fancy clothes on. It should be a place where people can give opposing views".

The actress further added, "The presence of opposition is so important in every field. It is not just politics. If there is no opposition then what is there. I am not in my authority, I am not going to jail them. I am just putting my opinion that this looks wrong to me. You think that just because is it is not in their interest of making money, my voice should be shut. So just because it doesn't serve any bodies purpose economically, my voice should be shut.  I am not saying that I am right or they are wrong. But I am saying that I should have the freedom to say. Tomorrow when I will make my film, my solo directorial, I would want people to say what they feel. And I will be very open to this. I don't have to shut every bodies view. If you have the freedom to make the film that you want to make don't I have the freedom to perceive it the way I see it."

Kangana Ranaut is set to change the picture of the reality show spectrum with 'Lock Upp'.

The show is all set to premiere on February 27, 2022. ALTBalaji and MX Player will live stream this show 24x7 on their respective platforms and will have the audiences interact directly with the contestants.