Kangana Ranaut on Wednesday fired fresh salvo against actor-comedian Vir Das over his 'Two Indias' monologue and demanded an action against him. She also shared a screenshot of an old tweet of Das and called him a creep man.

New Delhi: Bollywood actor Kangana Ranaut is the latest celebrity to slam comedian Vir Das for his recently uploaded video on YouTube, titled 'I come from two Indias' that was a part of his recent performance at the John F Kennedy Center in Washington.

Kangana, who is known for giving strong and sometimes shocking statements, took to her Instagram and slammed Vir's monologue about India and asked for strict action to be taken against him. The 'Tanu Weds Manu' actress wrote, "When you generalise all Indian men as gang-rapists it gives rise and encouragement to racism and bullying against Indians all over the world...after Bengal Famine Churchill famously said, 'These Indians breed like rabbits they are bound to die like this...' he blamed Indians` sex drive/fertility for the death of millions because of hunger... Such creative work targeting an entire race is soft terrorism... strict actions must be taken against such criminals @virdas." 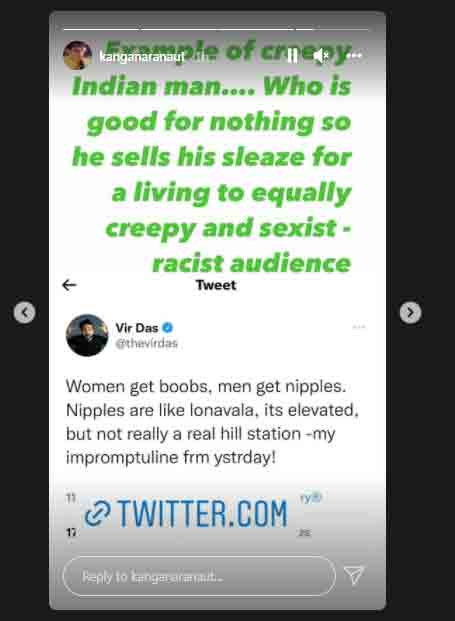 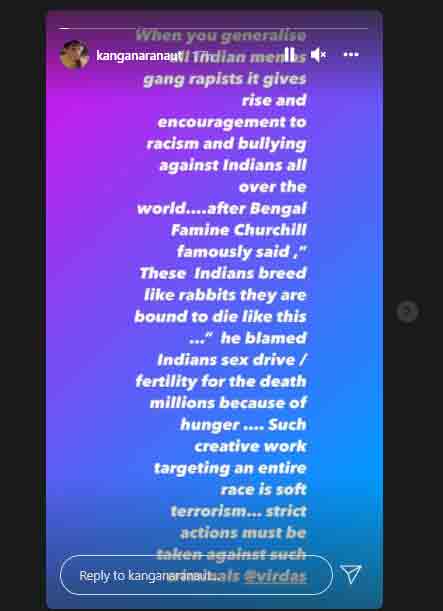 In the six-minute video, Das talks about the duality of the country and mentions some of the most topical issues India is facing, from its battle against COVID-19, incidents of rapes, crackdown against comedians to the farmers' protests.

A section on Twitter posted clips and pictures from his monologue, specifically the part where the comedian said, “I come from an India where we worship women during the day and gang-rape them during the night."

In view of the controversy, Das issued a statement on Tuesday clarifying that his comments in his monologue "I come from two Indias” weren't intended to insult the country.

The 42-year-old took to Twitter and posted a note, stating that his intention was to sever as a reminder that the country, despite its issues, was "great."