Actress Kangana Ranaut lashed out at Aamir Khan amidst the negativity surrounding his upcoming film 'Laal Singh Chaddha'. The actress took to Instagram and asked Aamir to stop 'making it about religion or ideology'.

NEW DELHI: Bollywood 'controversy queen' Kangana Ranaut, who is known to not mince her words when it comes to express her opinions, has once again targetted Mr perfectionist Aamir Khan for his upcoming film 'Laal Singh Chaddha'. As per Kangana, Aamir is the 'mastermind' for skillfully creating negativity around his upcoming release 'Laal Singh Chaddha', and he made the 'Hinduphobic' film 'PK'.

Kangana lashed out at the 'Taare Zameen Par' actor as she asked him to stop 'making it about religion or ideology'. She took to Instagram and shared a story writing, "I think all the negativity around upcoming release 'Laal Singh Chadda' is skillfully curated by mastermind Aamir Khan Ji himself." 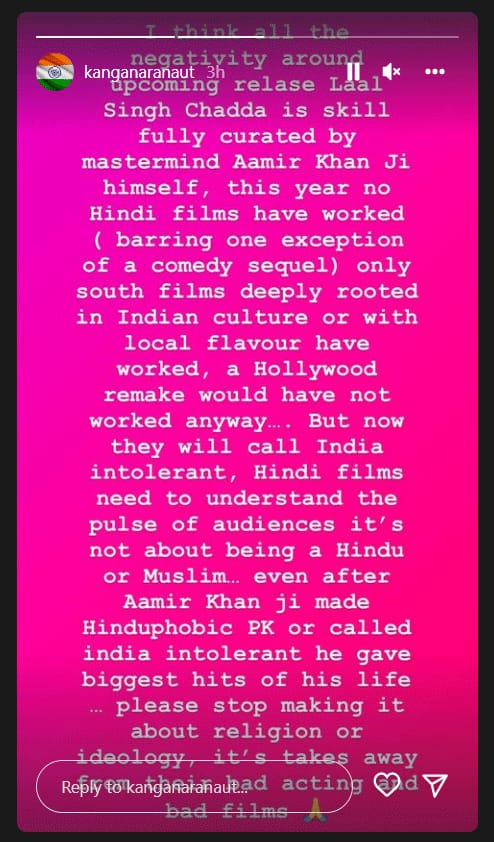 "Only south films deeply rooted in Indian culture or with local flavour have worked, a Hollywood remake would have not worked anyway." She added, "But now they will call India intolerant, Hindi films need to understand the pulse of audiences it`s not about being a Hindu or Muslim."

"Even after Aamir Khan ji made Hinduphobic 'PK' or called India intolerant he gave biggest hits of his life please stop making it about religion or ideology, it's takes away from their bad acting and bad films."

This is not the first time Kangana has attacked Aamir Khan publicly. Last year, the actress openly took a dig at the actor and insinuated that Aamir Khan, who is a 'divorce expert' and 'agony aunt' is the reason behind the separation of Samantha Ruth Prabhu and Naga Chaitanya.

Directed by Advait Chandan, 'Laal Singh Chaddha' has run into controversy ahead of the film release in theatres on August 11. Internet users are trending #BoycottLaalSinghChaddha on Twitter, urging everyone to not watch the movie. Reason? Aamir Khan's controversial "India's growing intolerance" statement he made in the past is being circulated while a few of Kareena's controversial statements from the past too have been dug up by haters.

Aamir Khan in his 2015 interview said, "Our country is very tolerant, but there are people who spread ill-will". His wife Kiran Rao also made headlines for saying that she considered leaving the country for the safety of their children.

Reacting to the 'BoycottLaalSinghChaddha' trend, Aamir Khan at a promotional event urged his fans to watch the films in theatres. "Yes, I feel sad. Also, I feel sad that some of the people who are saying this, in their hearts, they believe that I am someone who doesn't like India. In their hearts, they believe, but it is untrue. I really love the country... That's how I am. It is rather unfortunate that some people feel that way," he was quoted as saying.

Kareena Kapoor, who plays the female lead in the film, reacted to the boycott trend and told India Today, "There are different platforms. Everyone has an opinion. So now, if that is going to be there, then you have to learn to ignore certain things. Otherwise, it will just become impossible to live your life. And that's why I don't take any of this like seriously."