Umar Riaz who recently got eliminated from Salman Khan hosted show, has now been getting support from KRK. He has now taken an indirect dig at Salman Khan for his unfair decision.

New Delhi: As we all know, Bigg Boss 15 contestant Umar Riaz got eliminated in recent Weekend Ka Vaar episode after Salman Khan announced janta ka faisla which came against him. 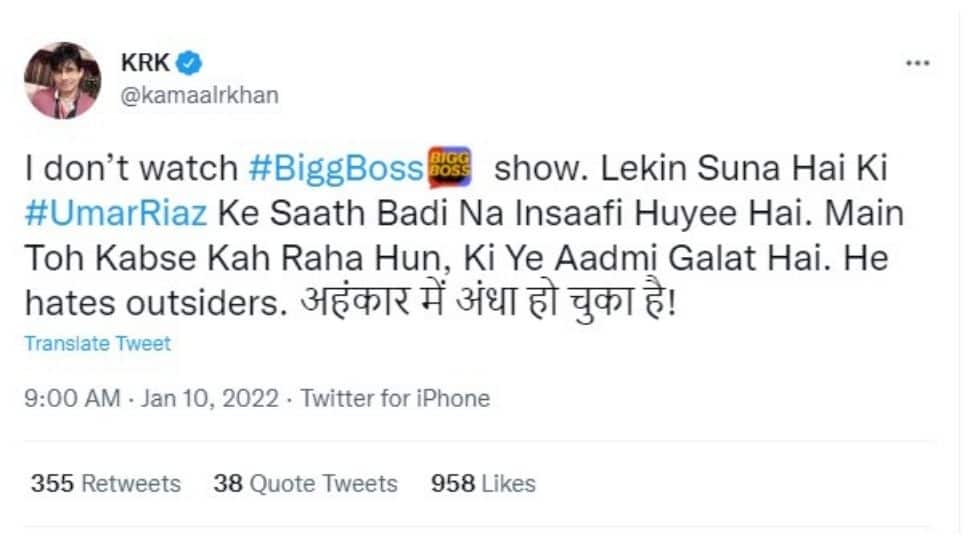 While sympathizing with Umar, KRK took an indirect dig at Salman Khan and went on calling him arrogant and egoistic.

For the unversed, Umar got evicted from the house due to getting physical violent at his fellow contestant Pratik Sehajpal on the show. Even after getting numerous warnings from the host of the show, Umar crossed all the limits and was seen getting aggressive during several tasks due to which he got eliminated from the show.

While some are in favour of the decision, Umar fans called it as an unfair decision and also demanded the makers to get him back on the show.

Well, the show has now been extended for two more weeks which will bring some sudden happiness and shocks for the housemates.

Bigg Boss 15 consists of some of the most popular faces including– Shamita Shetty, Karan Kundrra, Pratik Sehajpal, Nishant Bhat, Tejasswi Prakash, Rakhi Sawant, Devoleena Bhattacharjee, and Rashami Desai among others.

Bigg Boss 15 has now been extended for two more weeks and if rumours are to be believed then few more wild card entries will be expected to enter the house and so it will be interesting to see who will take the trophy home.

Till then keep watching this space for all the updates related to Bigg Boss 15.