New Delhi: Bigg Boss 13 Jasmin Bhasin's latest photo on Instagram has sparked wedding rumours with boyfriend Aly Goni. In the picture shared by the actress, she can be seen wearing chudda (bridal bangles) in her hands while happily smiling for the camera. Apart from the bridal bangles, Jasmin was dressed casually in grey corduroy shirt paired with mauve pants. However, it is her bright smile that is a show-stealer. “Shining and smiling,” Jasmin captioned her post.

“You are married,” inquired one fan, while others praised her looks. “STAYYYY HAPPYYY BABBYYYGIRLLL,” commented one user, while another wrote, “U r soooo sundar”. Many others dropped in heart and fire emojis. 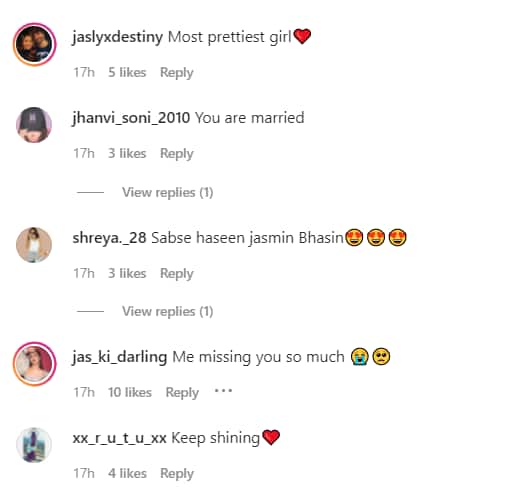 While, the image has sparked wedding rumours, it was clicked on the sets of her music video ‘Pyaar Karte Ho Na’, in which she stars opposite actor Mohsin Khan. The song is sung by Stebin Ben and Shreya Ghoshal and has garnered more than 4.4 million views on Youtube.

Earlier, Aly Goni had also hinted that he and Jasmin Bhasin might tie the knot soon. The ‘Yeh Hai Mohabbatein’ actor tried an Instagram filter that predicted his wedding date. He got ‘never’ in his first attempt but the second time, he got the result ‘in a few days’. Aly shared the video on Instagram Stories and wrote ‘soon’.

The romance started brewing between best friends Aly Goni and Jasmin Bhasin during their stint in Bigg Boss 13.