Sharing the photo, Sussanne wrote, "Happy, happy birthday, Aly Goni. I wish you a beautiful super year 2022. J’adore u bruh Ty." In the photo, both Aly and Arslan are all smiles as they pose for the camera. 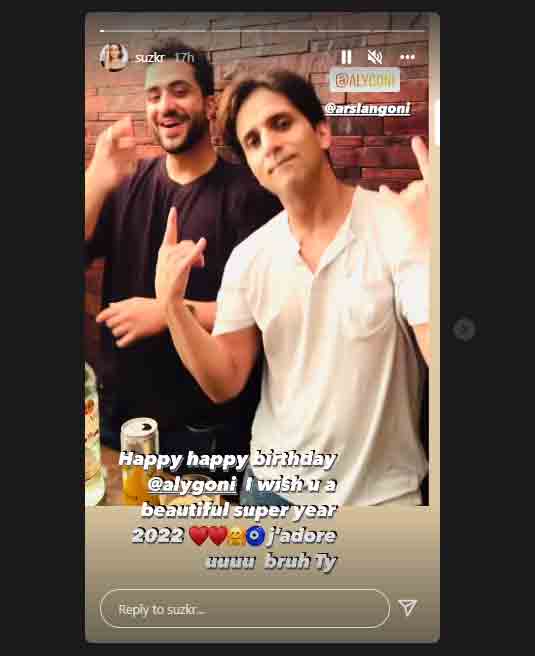 Sussanne and Arslan Goni are rumoured to be in a relationship for close to a year. Their cute PDA on social media often catches people's attention. In October 2021, Sussanne and Arslan had jetted off to Goa together to ring in her birthday. Back in December 2021, Goni had addressed their rumoured romance stating that despite spending time in Goa for the latter's birthday party, he and Sussanne are just 'close friends'.

Goni had also commented and left a mushy message followed by several hearts and kiss emojis in a post shared by Sussanne after she announced that she has tested positive for coronavirus. "What do I tell someone who has come out positive? I will always wish them god bless you, and that you will get well soon. As far as going viral is concerned and what people are saying, I cannot read all those messages. I don't do that. Everyone has the right to say what they want to. But I am supposed to say something sweet to someone who has just tested positive," he told Hindustan Times.

He then said that he always tried to avoid the frenzy around the rumours of their relationship. "Two people living a good happy life and that’s it," Arslan said about Sussanne and him.

The actor also said that he doesn't prefer to talk publicly about his relationship with Sussanne. "Two people living a good happy life and that’s it," Goni said.

Arslan Goni made his debut in Bollywood with 'Jia Aur Jia' opposite Kalki Koechlin and Richa Chadha. He also appeared in web-series 'Mein Hero Bol Raha Hun', produced by Ekta Kapoor. He is currently in Turkey, shooting for an upcoming project.

Meanwhile, Aly Goni celebrated his birthday with his girlfriend Jasmin Bhasin in London. The couple jetted off to the English capital last week.