NEW DELHI: Superstar Hrithik Roshan and the mystery girl aka actress-musician Saba Azad's growing proximity together is being seen as a 'couple thing'. The buzz is strong that they are dating and aren't shy to express their fondness for each other in public. It was only some time back that the Greek God was photographed walking hand-in-hand with his rumoured ladylove Saba at Mumbai airport as they together jetted off to Goa for a bash. Their airport PDA caught much attention and was widely talked about on the internet.

Now, weeks later, Hrithik has once again expressed his liking for Saba Azad with a social media post. The actor gave a shout out to the cast of 'Rocket Boys' on his Instagram stories on Friday. He shared a still from the show and wrote, "Repeat watch! So much to learn from this one. What amazing work by the entire team. Makes one proud to know it's made in India by one of us."

For rumoured girlfriend Saba Azad, he wrote: "You are one of the finest actors I have ever seen.. You inspire me."

This is what Hrithik Roshan posted: 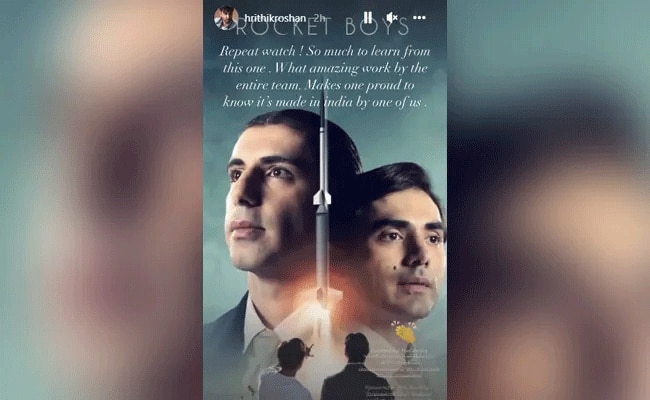 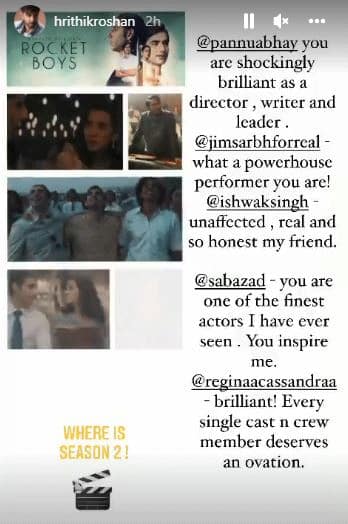 It all started when Hrithik and Saba were first photographed hand-in-hand after a cosy dinner date in February this year. They raised speculations once again after Saba was clicked at the Roshans' family Sunday lunch. They were also seen enjoying Kerala cuisines together. The owner of the restaurant shared the photos thanking the stars - Hrithik and Saba, for visiting the place and enjoying authentic Kerala dishes.

For the unversed, Saba Azad dated Naseeruddin Shah's son Imaad Shah for the longest and the two were in a live-in relationship. Saba made her debut with 'Dil Kabaddi,' and was also seen in the 2011 film 'Mujhse Fraaandship Karoge' alongside Saqib Saleem. She featured in 'Detective Byomkesh Bakshy' opposite late Sushant Singh Rajput. She was last seen in an anthology series 'Feels like Ishq' which was released in 2021.

On the work front, Hrithik has three films in the making. He is shooting for 'Fighter' also featuring Deepika Padukone. The actor also features in the Hindi remake of 'Vikram Vedha' and shared his first look from the film on his birthday - January 10. The movie also stars Saif Ali Khan.

Hrithik has also confirmed that he will be returning with 'Krrish 4'.

Reports are also there that the actor has been approached along with Kareena Kapoor Khan for an untitled project. However, there is no confirmation for it. If the actors give their nod to the film, they will team up together after their 2003 released 'Main Prem Ki Deewani Hoo'.