Anushka Sharma dropped pictures from her Diwali celebrations with daughter Vamika and joked that she is celebrating Holi and Diwali on the same day.

Kolkata: Festivals become more special when you celebrate them with your family members. Actress Anushka Sharma`s husband Virat Kohli is not in the country to celebrate Diwali with her but her daughter Vamika is making sure to make the festival of lights special and funny for her.

Taking to Instagram Story, Anushka dropped a picture of her daughter smeared with rangoli colors. The photo shows the baby`s feet smeared with color. Two others can also be seen playing with Vamika. Sharing the photo of the mess they created, Anushka joked, “Diwali and Holi on same day here.” 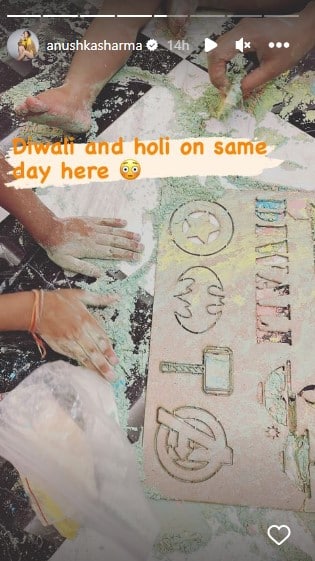 As Anushka is currently in Kolkata for the shoot of `Chakda Xpress`, she did not miss a chance to ring in the festival with her team. Anushka dropped a video in which the ‘Chakda Xpress’ crew is seen dancing to superstar Shah Rukh Khan`s iconic Chaiyya Chaiyya track. Anushka seems to be enjoying herself behind the camera as she`s heard cheering for her team. Anushka and Virat`s daughter Vamika was born on January 11, 2021. 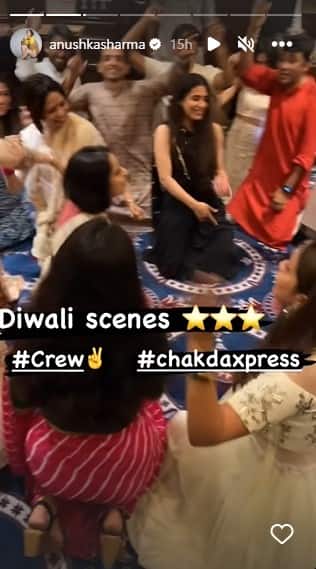 Anushka also dropped pictures of herself dressed in a saree for Diwali.

On the work front, Anushka is gearing up for her upcoming film ‘Chakda Xpress’ in which she is essaying the role of former Indian pacer Jhulan Goswami. The film marks her comeback to the movies after daughter Vamika’s birth. She was last seen in Aanand L. Rai’s ‘Zero’ alongside Shah Rukh Khan and Katrina Kaif, however, the film had failed to impress the audience.

Virat Kohli is currently in Australia for the on-going T20 cricket World Cup. A couple of days ago, he smashed 82 runs off 53 balls leading India to victory in a nail-biting match against Pakistan.