The women’s 49kg weightlifting competition unfolded on expected lines in the 36th National Games, with a tactical battle between Mirabai Chanu and Sanjita Chanu at the Mahatma Mandir in Gandhinagar on Friday. In the end, Mirabai walked away with the gold with a total lift of 191 kgs (Snatch 84kg, Clean & Jerk 107 kgs) while Sanjita had to settle for the silver medal with a total lift of 187 kgs (Snatch 82kg, C&J 105kg). Odisha’s Sneha Soren picked the bronze after totalling 169kg (Snatch 73kg, C&J 96kg). Participating in her second National Games, Mirabai revealed that she was nursing an injury in her left wrist, due to which she didn’t turn up for both her third attempts. “I recently injured my left wrist during training at NIS, Patiala, after which I made sure not to risk it further. The World Championships are coming up in December,” she said.

“It is a proud moment for me to represent Manipur at the National Games, and the excitement doubled when I was asked to lead the contingent at the Opening Ceremony. It normally gets hectic to attend opening ceremonies as my event starts early the next day, but I felt I must challenge myself this time around,” she added. 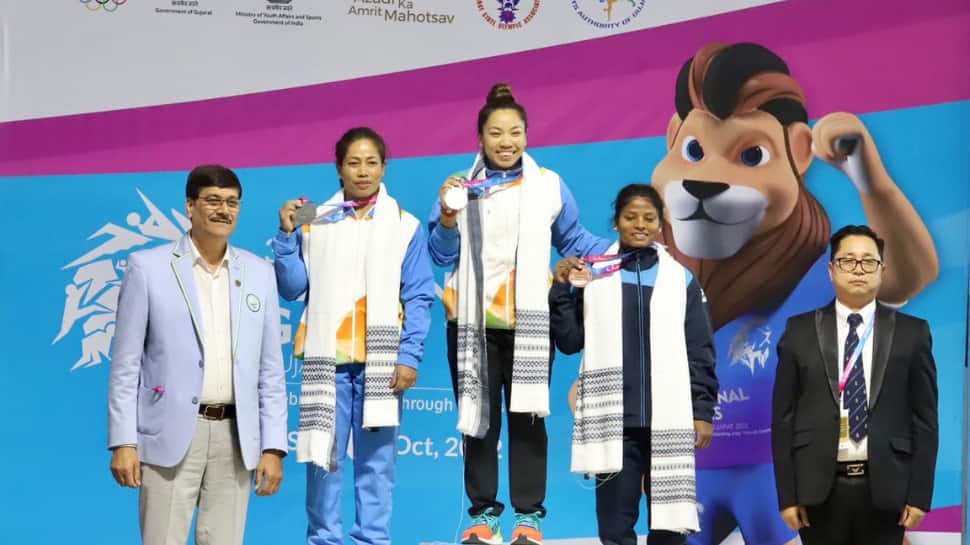 The diminutive Manipuri, who is aiming for her first podium finish at the Asian Games next year, prefers to stay in the moment, and focus on the Worlds where she is expected to be up against weightlifters from the Asian powerhouses.

“Yes an Asian Games medal is missing from the cabinet, and it’s something that’s on the back of my mind. It will my first Asian Games after missing out on the 2018 edition with a back injury. The competition level at the Asiad will be great, but for me, the main focus now is the Worlds, where I will get to compete against the same weightlifters,” the 28-year-old said.

In Snatch, Mirabai seized an early advantage by raising the bar to 81kgs in her very first attempt, before a clean effort of 84kg in her second lift gave her a cushion of 3kgs over her statemate Sanjita, who could manage 80kg and 82kgs in her first two attempts.

Sanjita’s third attempt of lifting 84kg was adjudged a foul. Mirabai preferred to save her energy and didn’t turn up for the third attempt.

In Clean and Jerk, Sanjita lifted 95kgs in her first attempt before raising the bar to 100kg and 105kg, with all three attempts getting the green light from the judges.

All eyes were pinned on Mirabai. She was greeted with thunderous applause from the crowd, that included a large Manipuri contingent. The Birmingham Commonwealth Games gold medallist successfully lifted 103 in her first attempt before returning to lift 107kg to confirm the centre spot on the podium. She didn’t need a third attempt to take home the gold.

Elated after confirming the first medals for their state, the two Manipur weightlifters joined the rest of the members of the contingent.

A visibly emotional Sanjita, considering the mental demons she had overcome for the silver, said, “This is a special moment for me. But congratulations to Mirabai. She deserves all the praise and accolades for her brilliant effort. It feels great to compete at the National Games, and represent my state. The last time (in Kerala 2015), I won the gold in a lower weight category, but after seven years, the level of competition definitely goes up.”