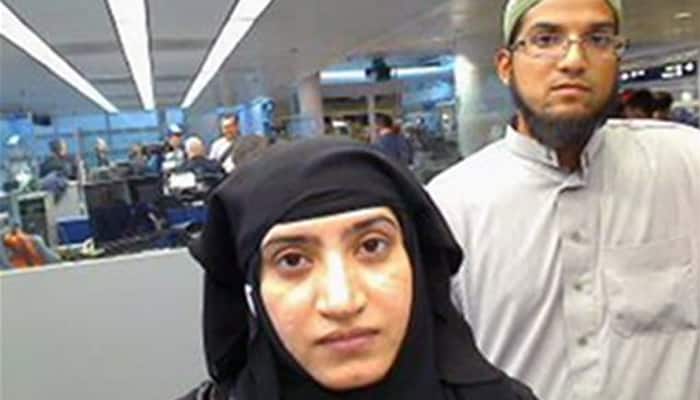 Washington: State Department visa officers conducted all required security checks on Tashfeen Malik, one of two shooters in the San Bernardino massacre early this month, but found no "derogatory" information before granting her a visa to enter the United States in 2013, a person familiar with the documentation said.

Because there was no derogatory information in Malik`s application, visa officers had no grounds for ordering deeper investigations into her background, let alone blocking her entry when she arrived in the United States in December 2013, officials have said.

The latest disclosures will likely strengthen calls in Congress to toughen the procedure for issuing visas in order to spot militants applying to enter the United States.

Pakistan-born Malik came to the United States under a K-1 "fiancee" visa. She was engaged at the time to Syed Farook, a US-born citizen who together with Malik carried out the December 02 shooting that killed 14 people.

Consular officers ran Malik`s name through US government consular and intelligence data bases, the source familiar with the documentation said. State Department sources declined to enumerate all the tests conducted before Malik`s application was approved. The State Department source said the department was legally unable to discuss the contents of any individual`s file.

The State Department`s consular corps has come under criticism for allowing Malik entry, especially because a copy of her visa application file released earlier this month by the House of Representatives Judiciary Committee raised questions about whether she and Farook actually met in Mecca, Saudi Arabia, before coming to the United States, as claimed on the application.

Late on Wednesday, a State Department official told Reuters that department records show that Malik provided the necessary evidence to satisfy the requirement of an in-person meeting of an engaged couple before a fiancée visa is granted. The official said consular officers may request information such as engagement photos, passport entry/exit stamps or statements confirming time spent together to satisfy the requirement.

The official added that the Saudi Ministry of Interior confirmed through Saudi immigration records that both Farook and Malik were in Saudi Arabia between October 01 and October 06, 2013.

The State Department on Tuesday provided Malik`s complete visa file to congressional investigators looking into how Malik obtained her visa.

The file was more extensive than documents earlier sent to Congress by Homeland Security, according to three US government sources familiar with both sets of the material.

The new records outline precisely what security checks were conducted on Malik before her visa was approved, including which US government data bases were checked.

Despite those checks, another source familiar with the material said they did not entirely resolve questions as to whether Farook and Malik actually met in person before she traveled to the United States.

Farook, in a statement submitted to support Malik`s visa application, said the couple first met in person and became engaged on Oct. 3, 2013, during the Haj pilgrimage to Mecca, according to the Homeland Security documents released by the House Judiciary Committee.

But information on the documents shows Malik did not receive her visa to enter Saudi Arabia until October 05, 2013.

Farook held a Haj visa, dated September 16, which allowed him to enter the Muslim holy city during the annual religious pilgrimage. But Malik did not hold a Haj visa, meaning she would have been barred from entering Mecca during the time claimed in the US visa application.

Investigators have said that before entering the United States, Malik had sent private messages via social media outlining her interest in Islamic militancy. But given that the messages were not posted publicly, officials say there is no way under current procedures that the messages could have been spotted by officials and raised questions about whether Malik should be granted a US visa.

Swami Prasad got angry on those who threatened him

DNA: This time's budget will bring happiness or sorrow?

DNA: For the first time in the history of cricket 'online' coach

DNA: When Shrikrishna Singh, the first CM of Bihar died in 1961

DNA: Historians will get evidence of Mahabharata

Kasam Samvidhan Ki: Pakistan is dying its own death?

Deshhit: After all, what will happen for women in the budget of the Modi government?