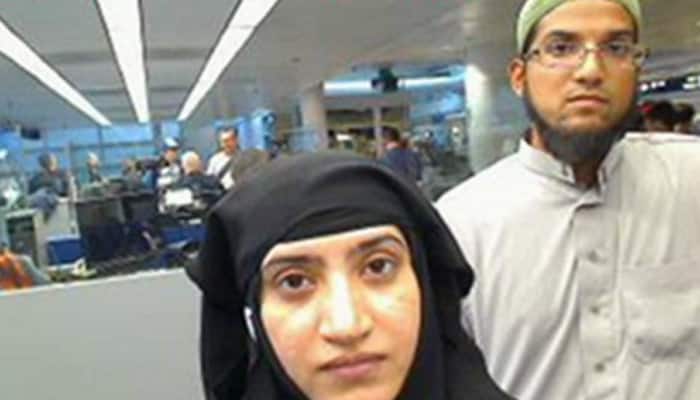 San Bernardino: A week-old investigation into the shooting rampage that left 14 people dead at a holiday party in Southern California turned on Thursday to a small lake near the scene of the massacre, where divers searched the water`s depths for new evidence in the case.

Investigators were drawn to Seccombe Lake in San Bernardino, California, by unspecified leads indicating the married couple who carried out the shooting had been in the vicinity the day of the killings, said David Bowdich, assistant director of the FBI field office in Los Angeles.

Bowdich said he would not discuss the “specific evidence we’re looking for.”

CNN reported investigators were seeking a computer hard drive that belonged to the couple, whom the FBI has said were inspired by Islamic extremists. Bowdich said investigators already have combed the surrounding park, and that the search of the lake could take days.

Seccombe Lake Park lies about 2.5 miles (4 km) north of the Inland Regional Center, the social services agency where 14 people were killed and 22 others injured when Syed Rizwan Farook and his wife, Tashfeen Malik, stormed a holiday gathering of his co-workers there on Dec. 2 and opened fire with assault rifles.

Farook, 28, a US-born son of Pakistani immigrants, and Malik, 29, a Pakistani native he married in Saudi Arabia last year, were slain hours later in a shootout with police.

The Federal Bureau of Investigation said it is treating the mass shooting as an act of terrorism, citing the couple`s declaration that they were acting on behalf of the militant group Islamic State, as well as a large cache of weapons, ammunition and bomb-making materials seized in the investigation.

The couple`s motives remain unclear. But if the crime proves to have been the work of killers driven by militant Islamic ideology, as the FBI suspects, it would mark the deadliest such attack on US soil since Sept. 11, 2011.

Kasam Samvidhan Ki: Modi is sure, Congress's ground has shifted?

DNA: When the third President of India Dr. Zakir Hussain was born in 1897

DNA: Salute the miracle in the midst of devastation in Turkey

DNA: The 'pleasant journey' of the most hi-tech expressway

Baat Pate Ki: Remembering the tricolor at Lalchowk, Modi said, I had challenged the terrorists..