Residents say they have been trying to take down the spiders one by one, but are not making much progress. 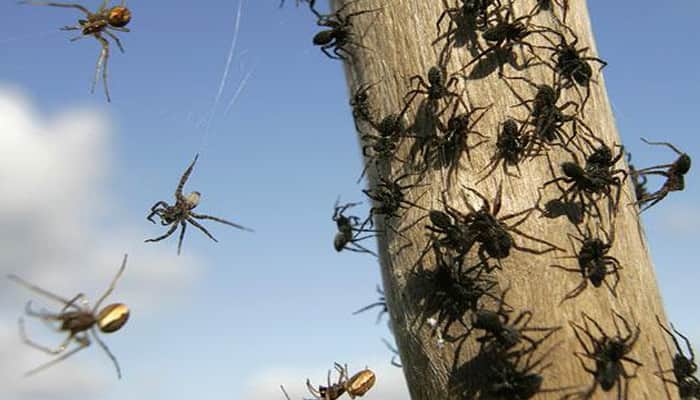 Houstan: Reminiscent of a horror film, millions of spiders have taken over a town in the US state of Tennessee, terrorising thousands of residents.

"I've seen about 20 on my porch just in the last day," said Ida Morris, a resident of North Memphis.

"It's like a horror movie," resident Debra Lewis said.

What looks like frost on the grass is actually nearly a km-long spider web, housing millions of the eight legged creatures.

"You can't even sit in her house because they're all on the wall, on the door. We been killing spiders for about an hour now," said Lewis.

Residents say they have been trying to take down the creatures one by one, but are not making much progress.

"They're in the air, flying everywhere. They all on the house, on the side of the windows," Lewis told CNN affiliate WMC in Memphis.

Experts say the presence of the spiders is not a bad thing.

The spiders are coming from web, part of what Memphis Zoo Curator Steve Reichling said is a natural "mass dispersal" of harmless, beneficial arachnids.

But residents are not happy.

"Clean this area up and spray for these spiders and make it safe. There are kids running around. A spider could bite the kids or anything," Lewis said.

On Twitter, the editor-in-chief of the Memphis Business Journal called for immediate civic action.

"The most important story right now is this North Memphis spider infestation," Greg Akers wrote. "Has anyone made an app tracking it's movements yet?"

Last month, thousands of spiders took over a bridge in Ohio. Last year, another spider army forced a family out of their home in Missouri.

US strike on Afghan hospital was 'frightening catalogue of errors': Charity

Jammu and Kashmir Police got big success in Narwal blast