Hurricane Matthew kills nearly 900 in Haiti, causes havoc in US

Hurricane Matthew, the most deadly storm in a decade, killed nearly 900 persons in Haiti. 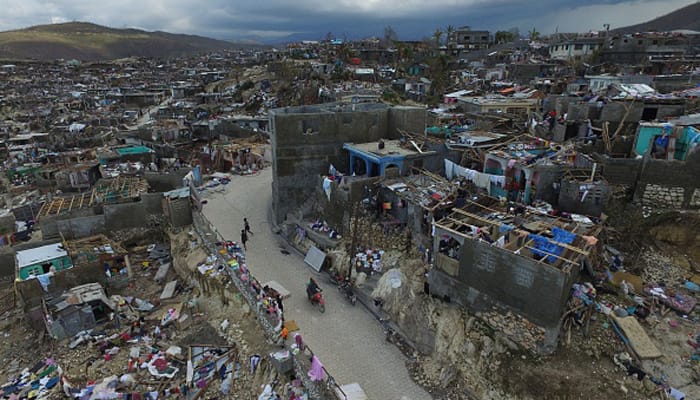 Port-au-Prince/Daytona Beach: Hurricane Matthew, the most deadly storm in a decade, killed nearly 900 persons in Haiti and left tens of thousands homeless before it slammed the Atlantic Coast at the border of Georgia and South Carolina early on Saturday, bringing torrential rain, powerful winds and storm surges.

According to some reports, the number of deaths in Haiti could reach thousands. Aid officials say up to 90 per cent of some areas in Haiti were destroyed.

Government and UN officials estimate that some 3,50,000 persons need help.

The storm, which spared Florida a direct hit, nevertheless caused extensive havoc. It caused devastation in Florida where one million people lost power and six died.

The storm, which on Saturday morning was downgraded to Category One, packed maximum sustained winds of 75 mph. Although the storm weakened substantially, the hurricane center warned of "strong winds and dangerous storm surge" along the South Carolina coast and heavy rains.

Matthew, with winds of 105 miles per hour, is expected to move to North Carolina by night. The storm surges are likely to reach six to nine feet above high tide from Jacksonville, Florida, up through Charleston, South Carolina, reports said.

Haiti has borne the brunt of the storm as Matthew tore through the Caribbean earlier this week as a Category 4 storm. The hurricane also crossed over the Bahamas on its way to the United States.

In a part of Haiti`s southern peninsula, the storm destroyed nearly 30,000 homes and killed 150 people. In many areas, the sugar, banana and mango crops were flattened.

Rescue efforts were hit by the massive destruction all around, with trees and buildings felled and floodwater marooning remote areas.

The UN has warned that it could take days for the full impact of Matthew in Haiti to emerge.

Haiti`s Civil Protection Agency on Friday doubled the death toll from the hurricane from 400 to more than 800.

World Food Programme`s Haiti Director Carlos Veloso said some of the hard-hit towns in Haiti can be accessed only by air or sea.

More than 61,500 people are in shelters, officials said,

Mobile phone networks are down and roads flooded, making it difficult for aid to reach hard-hit areas in Haiti.

The Red Cross has launched an emergency appeal for $6.9m, "to provide medical, shelter, water and sanitation assistance to 50,000 people".

There have been concerns over a surge in cholera cases, with at least seven deaths reported.

A 2010 earthquake in Haiti killed thousands of people.

Four persons died in the neighbouring Dominican Republic on Tuesday.

As it approached Florida, the storm swept past the coast with winds of up to 120 mph (195 kph) but did not make landfall in the state.

US President Barack Obama on Friday warned that, while southern Florida had been spared the worst, the hurricane remained very dangerous, and the risk of a storm surge and flooding remained real.

A state of emergency is in place in several states of US. The hurricane has caused major transportation disruptions, with more than 5,200 flights canceled between Wednesday and Saturday.

Land sinking like Joshimath in Doda of Jammu and Kashmir?

Imran Khan is worried about going to jail