Trump and Clinton turned their sights on each other after their Super Tuesday wins, with Trump promising to "go after" Clinton. 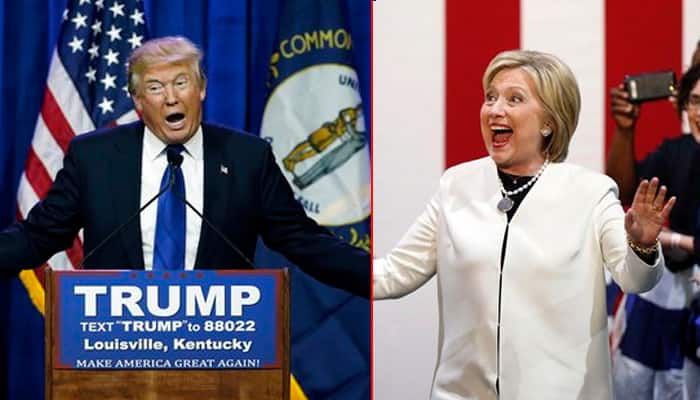 Washington: Republican Donald Trump and Democrat Hillary Clinton rolled up a series of wins on Tuesday, as the two presidential front-runners took a step toward capturing their parties` nominations on the 2016 campaign`s biggest day of state-by-state primary contests.

Trump and Clinton turned their sights on each other after their Super Tuesday wins, with Trump promising to "go after" Clinton and the former secretary of state decrying what she called Trump`s divisive rhetoric.

Trump`s rival Ted Cruz, a U.S. senator from Texas, won his home state and neighboring Oklahoma, bolstering his argument he had the best chance to stop the controversial Trump. U.S. Senator Marco Rubio of Florida, the favorite of the Republican establishment, had yet to register a win but was leading in Minnesota as the votes were counted.

Clinton`s rival Bernie Sanders, a democratic socialist U.S. senator from Vermont, also won his home state along with Oklahoma and Colorado and vowed to pursue the battle for the nomination in the 35 states that had yet to vote.

Super Tuesday was the biggest single day of state-by-state contests to select party nominees for the Nov. 8 election to succeed Democratic President Barack Obama. Voting stretched from eastern states to Texas and Minnesota.

Opinion polls heading into the voting had shown Trump leading in most of the 12 states up for grabs, raising the possibility of a big night that would intensify worries among Republican leaders who fear the billionaire could inflict long-term damage on the party.

"I am a unifier," Trump told reporters in Palm Beach, Florida, dismissing concerns that his nomination would rip apart the party. "Once we get all this finished, I`m going after one person - Hillary Clinton."

Exit polls and early results showed Vermont was still too close to call for Republicans, networks said. Alaska Republicans and both parties in Minnesota were holding contests with results expected later.

Clinton had Trump on her mind in her victory speech, although she never mentioned him by name.

"The stakes in this election have never been higher and the rhetoric we’re hearing on the other side has never been lower," Clinton, 68, told supporters in Miami. "Trying to divide America between us and them is wrong, and we’re not going to let it work."

Sanders won his home state of Vermont and Oklahoma, two of five states he was targeting for victory on Tuesday. He lost to Clinton in Massachusetts, another state he was hoping to win.

Sanders thanked cheering supporters in his hometown of Burlington, Vermont, and assailed the Republican front-runner.

`DONALD TRUMPS OF THE WORLD`

"We are not going to let the Donald Trumps of the world divide us," said Sanders, 74, adding that he expected to pile up "hundreds" of convention delegates in voting on Tuesday.

Trump, 69, has worried many in the Republican establishment with proposals such as building a wall along the U.S. southern border with Mexico, deporting 11 million illegal immigrants and slapping a temporary ban on Muslims entering the country.

Even as Trump advances, many Republican Party leaders do not support him and worry that he would be easily defeated in November if Clinton becomes the Democratic nominee.

Cruz told supporters at his victory party in Texas that Trump was a "Washington dealmaker, profane and vulgar, who has a lifelong pattern of using government power for personal gain."

The crossfire between Trump and establishment Republicans threatened to tear the party apart at a time when it will need to generate momentum behind a prospective nominee.

But while Trump`s campaign has confounded many Republican leaders, the New York real estate developer cites his high poll numbers and big primary wins as proof he is not dividing the party but grown its ranks.

"We have expanded the Republican Party," he said in Florida.

With his string of victories on Tuesday, Trump extended his lead in convention delegates over Cruz, Rubio, Ohio Governor John Kasich and retired neurosurgeon Ben Carson.

On the Democratic side, Clinton took advantage of her strong performance with black voters to cruise to big wins in several Southern states, where blacks make up a big bloc of the Democratic electorate.

While some Democrats have begun to question whether Sanders should continue his challenge to Clinton, he said he had no intention of dropping out anytime soon.

"At the end of tonight, 15 states will have voted, 35 states remain," Sanders said in Vermont. "And let me assure you that we are going to take our fight for economic justice, for social justice, for environmental sanity, for a world of peace to every one of those states."

China's militarization of South China Sea will have consequences : U.S

Violence erupts between Israel and Palestine

Plane Crash: The accident happened due to a technical fault?

Pakistani rupee experiences worst one-day decline in 20 years, plunges to 262 against the dollar

45-year-old Biotech founder tech is spending millions a year to be 18 again. Here's how