At least 25 dead as tornados, storms strike Texas in US

Tornados knocked cars off a highway and flattened homes in Texas, raising the death toll to 25 as a string of powerful storms wreaked havoc across much of the southern United States. 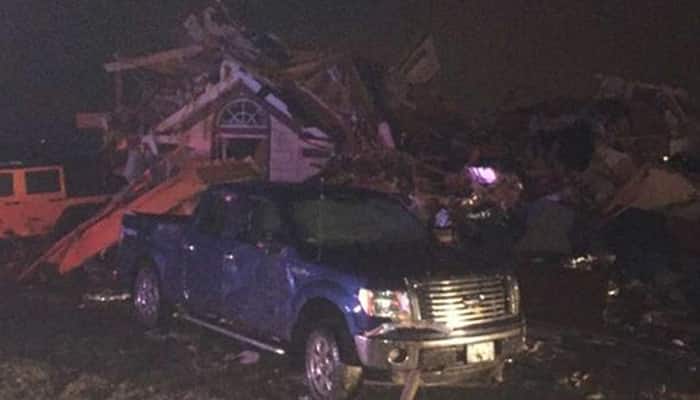 Chicago: Tornados knocked cars off a highway and flattened homes in Texas, raising the death toll to 25 as a string of powerful storms wreaked havoc across much of the southern United States.

At least eight people were killed as tornados struck parts of the densely populated Dallas-Fort Worth metroplex, leaving much of the region in darkness, local officials and media reported.

The Texas fatalities came after 17 people were killed in storm-related incidents since Thursday in Mississippi, Tennessee and Arkansas.

A tornado touched down around 6:45 pm in Garland, Texas, city officials said in a statement.

"Five deaths have been confirmed," the statement said.

"Extensive damage has been reported to vehicles, homes, and apartments in the same area."

The deaths are "believed to be related to vehicles struck by the tornado," it said, adding that there was also an unconfirmed number of injuries.

The tornados -- residents say at least four of them -- snapped power cables and knocked over pylons, leaving some 50,000 people in the dark, the Dallas Morning News reported.

The Garland fatalities were apparently "blown off the highway by high winds," Garland police spokesman Mike Hatfield told the newspaper.

"We're dealing with darkness out here. All of the street lights and highway lights are out," Hatfield said.

Three other people were killed in weather-related incidents in Collin County, just north of the metroplex, the newspaper said, citing local police.

The late yesterday tragedy came as millions of residents in the southern United States struggle to recover from fierce storms and heavy flooding.

Feeding on unseasonably warm air, the storms and tornados have left a trail of destruction in rural communities from Alabama to Illinois.

In Alabama, where Governor Robert Bentley has declared a state of emergency to deal with the heavy flooding, tornadoes on Friday uprooted trees and tore off rooftops, with one
touching down in Birmingham, the state's most populous city.

"The damage was ... confined to approximately one square mile," Birmingham Fire Department Chief Charles Gordon told CNN. "We have three houses that collapsed."

No one died, but Gordon said victims were rescued from the debris.

Four arrested in Pakistan for importing liver meat from India

Dr. Rishikant talks about the meaning of world heart day

Heart being a vital organ, should get the attention it deserves