The OSIRIS-REx spacecraft, equipped with an instrument, will measure the spectral signatures of Bennu's mineralogical and molecular components. 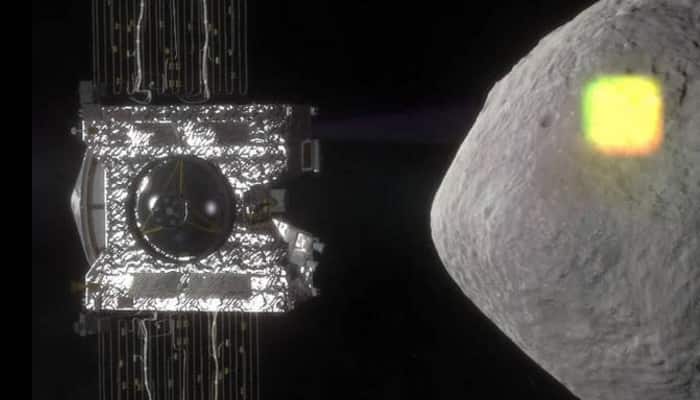 Washington: NASA is launching its OSIRIS-REx spacecraft in September to a near-Earth asteroid known as Bennu, to search for the building blocks of life.

After the spacecraft has thoroughly surveyed Bennu from orbit, it will descend to the surface and collect a sample of the asteroid for return to Earth in 2023.

The OSIRIS-REx spacecraft, equipped with an instrument, will measure the spectral signatures of Bennu's mineralogical and molecular components.

Known as OVIRS (OSIRIS-REx Visible and Infrared Spectrometer), the instrument on board will measure visible and near-infrared light reflected and emitted from the asteroid and split the light into its component wavelengths, much like a prism that splits sunlight into a rainbow.

"OVIRS is key to our search for organics on Bennu. In particular, we will rely on it to find the areas of Bennu rich in organic molecules to identify possible sample sites of high science value, as well as the asteroid's general composition," explained Lauretta, principal investigator for the OSIRIS-REx mission at University of Arizona in Tucson.

In this NASA video, OVIRS instrument scientists Dennis Reuter and Amy Simon discuss the challenges and rewards of sending a spectrometer into deep space.

OVIRS will work in tandem with another OSIRIS-REx instrument -- the Thermal Emission Spectrometer (OTES).

While OVIRS maps the asteroid in the visible and near infrared, OTES picks up in the thermal infrared.

This will allow the science team to map the entire asteroid over a range of wavelengths that are most interesting to scientists searching for organics and water.

In the visible and infrared spectrum, minerals and other materials have unique signatures like fingerprints.

These fingerprints allow scientists to identify various organic materials, as well as carbonates, silicates and absorbed water, on the surface of the asteroid.

The data will actually allow scientists to make a map of the relative abundance of various materials across Bennu's surface.

"I can't think of a spectral payload that has been quite this comprehensive before," said Dennis Reuter, OVIRS instrument scientist at NASA's Goddard Space Flight Center in Greenbelt, Maryland.

As the spacecraft approaches Bennu, OVIRS will view one entire hemisphere at a time to measure how the spectrum changes as the asteroid rotates, allowing scientists to compare ground-based observations to those from the spacecraft.

Once at the asteroid, OVIRS will gather spectral data and create detailed maps of the surface and help in the selection of a sample site.

Despite its capabilities to perform complex science, OVIRS is surprisingly inexpensive and compact in its design.

Unlike most spectrometers, OVIRS has no moving parts, reducing the risk of a malfunction.

"We designed OVIRS to be robust and capable of lasting a long time in space," Reuter said in a NASA statement.

The team also had to plan for another major threat: water.

Immediately after launch, the team will turn on heaters on the instrument to bake off any water.

The heat will not be intense enough to cause any damage to OVIRS, and the team will turn the heaters off once all of the water has evaporated.

DNA: Rahul 'fires' on Modi government on the pretext of Adani

DNA: When the British East India Company occupied the Awadh region in 1856

DNA: Videos of devastation caused by earthquake in Turkey will make you cry

DNA: Don't fall in the trap of fake job....use your intelligence