Mercury to make rare transit across the Sun today: How to watch it safely! 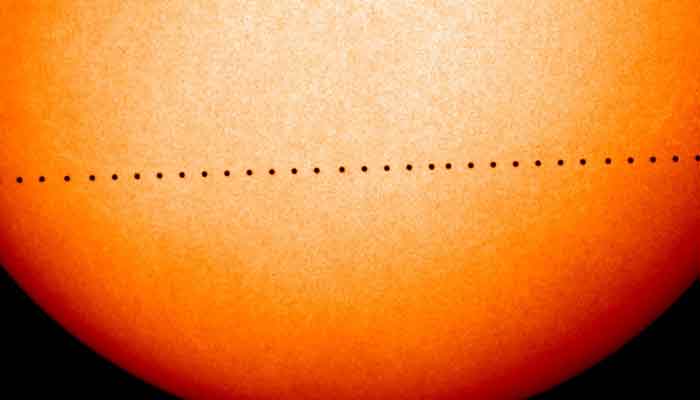 New Delhi: Mercury, the smallest of the eight planets, is all set to make a rare transit across the Sun Monday, May 9, 2016, offering skygazers a rare opportunity to witness the remarkable astronomical phenomenon that only occurs about 13 times a century.

So if you're in for a treat this time around, take note! Mercury will begin its transit at 7:12 am EST (4:42 pm, India time) today and take about 7.5 hours to fully cross the face of the sun. During this time, Mercury will appear as a small black dot as it crosses the edge of the Sun.

A transit occurs when one astronomical body appears to move across the face of another as seen from Earth or from a spacecraft.

According to NASA, the entire 7.5-hour path across the sun will be visible across the Eastern United States using magnification and proper solar filters, while those in the West can observe the transit in progress after sunrise.

But be careful and ensure that you have a solar filter to watch the spectacular celestial show. Looking directly at the phenomenon can result in serious eye damage and even blindness.

Meanwhile, NASA will stream a live program on its TV, NASA TV and the agency’s Facebook page from 10:30 to 11:30 a.m. (ETD) -- an informal roundtable during which experts representing planetary, heliophysics and astrophysics will discuss the science behind the Mercury transit.

Khabren Khatakhat: 5G services to be rolled out today

Videsh Superfast: Ukraine will soon come to its knees - Putin

Know the method of worshiping Goddess Katyayani... from Astrology Guru