Eleven-day long Ganesh festival began in Telugu states of Telangana and Andhra Pradesh on Monday with religious fervour and devotion amid tight security. 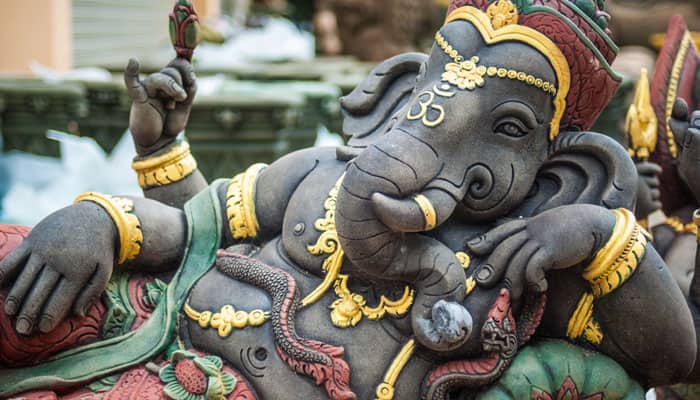 Thousands of idols were installed in twin cities of Hyderabad and Secunderabad as well as the IT district of Cyberabad for 'puja' by the devotees.

Lord Ganesha's idols of all sizes and in different colours and 'avtars' were installed in specially decorated 'pandals' or on makeshift platforms in residential neighbourhoods and commercial centres. About 40,000 idols have been installed in public places.

Like every year, the tallest idol has been installed in Khairatabad, the heart of the city. This year, the organisers have arranged 58-foot tall idol. Long queues of devotees were seen at the biggest idol.

Telangana and Andhra Pradesh Governor E.S.L. Narasimhan and his wife Vimla Narasimhan started the festivities with 'puja' at Khairatabad idol.

Over the last couple of days, several trucks were seen carrying giant idols from Dhoolpet, a market famous for idol-making. The markets were teeming with devotees buying small idols and 'puja' material.

The festivities will conclude on September 15 with a mammoth immersion procession, which brings the entire city to a halt.

As the festivities are coinciding with Muslim festival of 'Bakr Eid', police is making additional security arrangements to maintain law and order. 'Bakr Eid' will be celebrated on September 13.

The police is deployed 20,000 personnel for the smooth and peaceful conduct of the festivities. Security personnel from neighbouring states and the central paramilitary forces will also be deployed on the immersion day.

In addition, the police is banking on technology. More than 12,000 CCTV cameras will be installed along the procession route.

Like in the past, several government agencies and non-governmental organisations made an effort to create awareness for environment-friendly festivities.

There have been attempts to dissuade people from going for idols made of plaster of paris and heavy metal-based paints but it did not yield desired results.

Authorities and environmentalists have been voicing concern over the pollution caused by such idols in lakes, especially Hussain Sagar Lake in Hyderabad.

Attempts to decentralise the immersion procession and convince organisers to immerse idols in other lakes also proved futile.

The Telangana Rashtra Samithi (TRS) government had also come out with a proposal to build an alternate lake near Hussain Sagar for immersions but there were no takers for it.

Bhagyanagar Ganesh Utsav Samithi, which had been organising the celebrations on a grand scale for the past 36 years, is opposed to any move to restrict the height of the idols or to divert the immersion procession.

Samithi President G. Raghuva Reddy said the festival would be celebrated with religious fervour and spirit of nationalism.

He called for organising special programmes at every 'pandal' from 9 p.m. every day to show unity and highlight the culture.

UP Bypolls: Akhilesh Yadav accused of irregularities in the elections

Home Minister Amit Shah voted along with his family and then visited Kameshwar Mahadev.

Gujarat Election 2022: What is the expectation of youth regarding Gujarat elections, listen to them

Jyotish Guru Show: Know the solution of your problem