After sinking in August from their convention highs, the favourable ratings for US Presidential candidates Donald Trump and Hillary Clinton show little to no positive momentum, a Gallup poll has found. 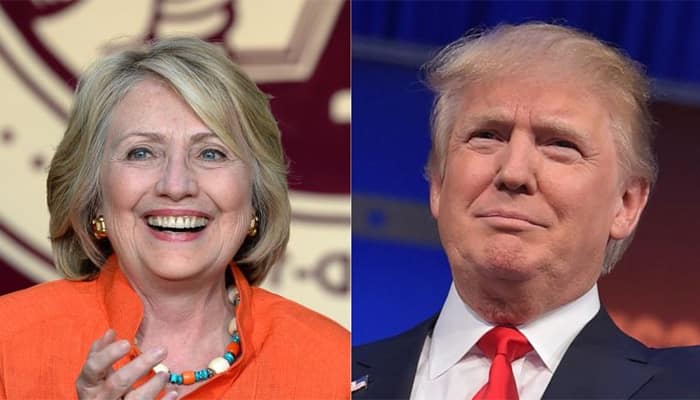 Washington:  After sinking in August from their convention highs, the favourable ratings for US Presidential candidates Donald Trump and Hillary Clinton show little to no positive momentum, a Gallup poll has found.

Clinton's current 38 per cent favourable rating essentially ties her personal low of 37 per cent, first reached during the Republican national convention in July.

Trump's latest rating, at 34 per cent, is just a bit better than where he stood at the close of the Democratic convention, which was 33 percent, the August 31-September 6 poll found, Xinhua news agency reported.

Both candidates' images changed slightly during the convention period in the second half of July, showing improvements during their own party's convention and declines during the other.

But those changes proved fleeting, and neither candidate is much better off today than before the party conventions, Gallup found.

Clinton's rating among blacks, at 63 per cent, is seven points below where it stood in the first half of July.

It is also her lowest weekly favourable rating among blacks this year, after occasionally dipping to as low as 65 per cent.

At the same time, like Clinton's, most of Trump's subgroup ratings are remarkably similar to where they were before the start of the conventions -- most within two points of his July 1-17 scores.

The one notable change for Trump is a five-point increase in his rating among Republicans, which helps account for his two-point overall increase in favourability between the two periods, Gallup found.

Clinton remains near her record-low favourability, with the added concern that her favourability is slumping among blacks.

Trump's 34 per cent favourable rating is better than his 2016 low of 27 per cent, recorded in April, but remains near the 32 per cent to 34 per cent range seen throughout August and still lags Clinton's current rating, according to Gallup.

Rather than offering a sign that voters are finally warming up to one candidate or the other, the latest ratings underscore the historic nature of this year's election as one featuring the two most unpopular nominees since scientific polls were invented, Gallup said.

US will go after ISIS chief Baghdadi the same way it went after Osama: Hillary Clinton

“I think it is not possible,” R Ashwin reacts to Pakistan's boycotting world cup threat