'No question of a Third Front, need one 'main front' to defeat BJP in 2024 polls': Nitish Kumar

Bihar CM Nitish Kumar was speaking at a mega rally organised by INLD in Haryana's Fatehabad, which was attended by various political bigwigs.

"If all non-BJP parties unite, which must include our friends from Congress, then we can get rid of those working to destroy the country," Nitish Kumar said at the rally organised to mark former deputy prime minister Devi Lal's birth anniversary.

Nitish Kumar, whose JD(U) snapped ties with the BJP last month, also said that there is "no question of a Third Front" and there should be one "main front" to defeat the BJP in the 2024 general elections.

He also urged leaders on the dais, including some with a strong anti-Congress history, to work for a larger unity and said this "main front of opposition" will ensure that the BJP loses badly in the 2024 polls.

There is no real Hindu-Muslim conflict in society, Nitish Kumar said in his address, adding that some mischief-makers are present everywhere.

A large number of Muslims chose to remain in India after the Partition in 1947, the JD(U) supremo added. 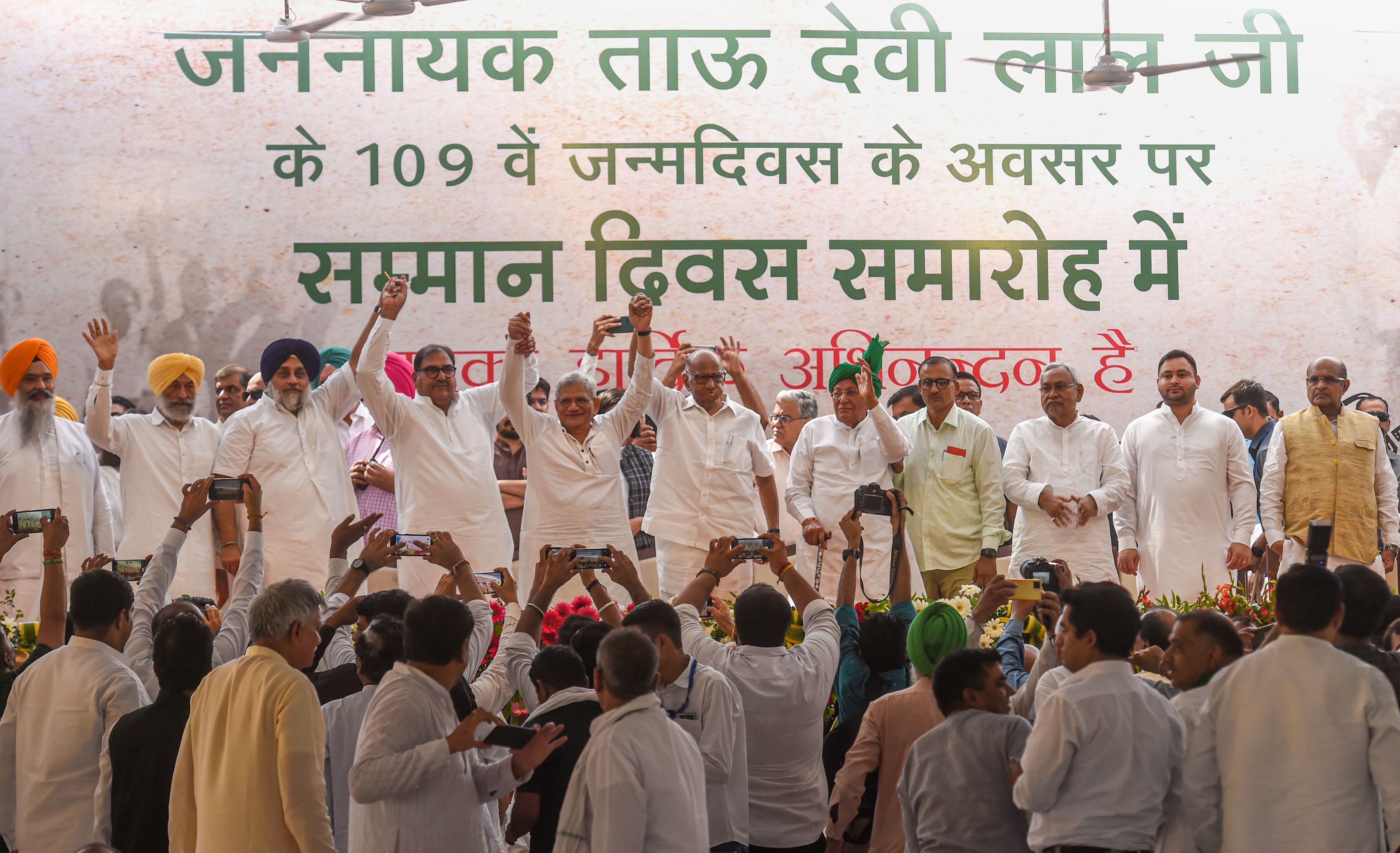 Hitting out at the Opposition leaders who attended the INLD rally, BJP chief JP Nadda targeted them by alleging that they were all "corrupt" and "family parties".

"Today in Haryana, there is a meeting of opposition leaders. They have all gathered together to celebrate Devi Lal's birth anniversary. Two things are common to them. One, they all are family parties and two, all are fully neck deep in corruption. Some of them are out on bail and others are accused in cases," Nadda said while speaking at the inauguration of BJP district office in Kerala's Kottayam.

"So you can see the kind of challenge the BJP is facing," he added.

Nadda further said that BJP was the only national party in the country as other national parties have "shrunk".

"Even the Indian National Congress is no longer a national party. It is not even an Indian party anymore. It has become a bhai-behen, brothers and sisters, party," he said.

Giving examples of family or dynastic parties in various states, Nadda said, "In Jammu and Kashmir we have PDP and National Conference, in Punjab we have Shiromani Akali Dal controlled by the Badal family, in Haryana, we have the Chautala family party, in Uttar Pradesh, we have Samajwadi Party controlled by Mulayam Singh Yadav and Akhilesh Yadav family.... In Jharkhand, we have Jharkhand Mukti Morcha which is a dynastic party, in West Bengal, there is Trinamool Congress Party, in Odisha we have the Biju Janata Dal controlled by the Patnaik family, in Andhra Pradesh we have YSR Party, in Telangana, there is Chandrashekhar Rao family party -- all these are purely family-based parties where there is no scope for democracy."

The BJP is fighting to save democracy from these "dynasty-based, highly corrupt" parties, he added.