Udaipur murder: NIA to question accused in Rajasthan only

Udaipur Murder Case: Kanhaiya Lal, a Hindu tailor was beheaded by two Islamic radicals in Udaipur, Rajasthan at his shop on Tuesday for supporting now-suspended BJP leader Nupur Sharma for her controversial comment on Prophet Muhammad on social media. The case is being investigated by the NIA.

Udaipur Murder: Pressured for strict and timely action, Rajasthan Chief Minister Ashok Gehlot on Wednesday held an all-party meeting in Jaipur over Udaipur killing that triggered a nationwide outrage. Congress’s ideological and political opponent Bharatiya Janata Party (BJP) also took part in the meeting and parties unanimously condemned the murder and termed it as a ‘terrorist attack.’ Gehlot also announced a Rs 50 lakh financial aid for the family of Kanhaiya Lal, a Hindu tailor who was brutally killed in broad daylight over social media posts. The government has assured strict punishment to the perpetrators and the case has been taken over by National Investigation Agency (NIA).

Kanhaiya Lal’s killing is being investigated by the National Investigation Agency (NIA), and the Anti-Terrorism Squad (ATS) and Special Operation Group (SOG) of the Rajasthan Police are coordinating with the NIA.

On Thursday, a large number of protestors gathered at the spot of Kanhaiya Lal's murder to demand justice for the brutal killing. CM Ashok Gehlot also met the family of Kanhaiya Lal.

Meanwhile, all the accused have been arrested and the probe has begun. Protestors are demanding capital punishment for the killers. According to the police, one of the assailants, who was identified as Riyaz Akhtar, attacked Kanhaiya Lal with a sharp-edged weapon while the other, Ghos Mohammad, recorded the crime on his mobile phone, police said. The police have also found a Pakistani connection in the case.

All the Muslim bodies, including Jama Masjid and Dawat-e-Islam, have condemned the brutal killing and called it anti-Islam. In a statement, Shahi Imam Syed Ahmed Bukhari said: "The inhumane incident of the murder of a man named Kanhaiya Lal by two persons named Riaz and Ghous, and that too in the name of the Holy Prophet is not only an act of cowardice but an act against Islam, unlawful and inhuman

About the law and order situation, massive protests have erupted but a curfew was imposed in the nearby areas," Manoj Kumar, SP, Udaipur said. A statewide alert has also been issued to all Superintendents of Police and Inspector Generals to increase the mobility of forces and to maintain officers on the ground.

Kanhaiya Lal, a Hindu tailor was beheaded by two Islamic radicals over a social media post, in which he supported now-suspended BJP leader Nupur Sharma, who made a controversial remark against Prophet Muhammad. The killers later released Udaipur killing video in which they also threatened PM Modi. The Udaipur killing video was later widely circulated on social media platforms.

Thanks for staying with Zee News for latest updates.

In Ajmer, the police arrested three people, including a cleric, over a hate speech which allegedly called for "beheadings" to avenge the insult to Prophet Mohammad. According to PTI sources, they suspect that the speech delivered at the dargah's main gate on June 17 could have played a role in provoking the Udaipur tailor's killers the next day. (PTI)

The National Investigation Agency (NIA) will question the two accused, Riyaz Akhtari and Ghouse Mohammad, in Rajasthan only. (IANS)

Whole country was shaken by what happened in Udaipur. This is a henious crime, with no forgiveness. Police did good work, nabbed them quickly. It's a matter of terror. NIA was called. Everyone is enraged. We're appealing for peace to be maintained: CM Ashok Gehlot (ANI)

Congress urges Prime Minister Narendra Modi to make an appeal to the people to maintain peace and harmony in the wake of the "current situation in the country". (PTI)

Riyaz Akhtari and Ghouse Mohammad, the accused in the brutal murder of a tailor (in Udaipur, Rajasthan), will be presented in a special NIA court in Jaipur by 5 pm today or tomorrow. They will be questioned in Rajasthan and not be brought to Delhi: NIA

Riyaz Akhtari and Ghouse Mohammad, the accused in the brutal murder of a tailor (in Udaipur, Rajasthan), will be presented in a special NIA court in Jaipur by 5 pm today or tomorrow. They will be questioned in Rajasthan and not be brought to Delhi: NIA

Preliminary inquiry suggests that there may not be any terrorist group involved in the murder but a terror gang: NIA

Some media reports about the links of the two accused with some terrorist outfit is based on speculation: NIA

Some media reports about the links of the two accused with some terrorist outfit is based on speculation: NIA (ANI)

Thousands of people took part in a march to protest the gruesome killing of tailor Kanhaiya Lal in Udaipur. (PTI)

CM Ashok Gehlot reached the house of deceased Kanhaiya Lal in Udaipur and met the victim's family. The CM handed over a cheque of Rs 51 lakh to them.

The Congress on Thursday expressed concern over the "current situation in the country" and urged Prime Minister Narendra Modi to make an appeal to the people to maintain peace and harmony, PTI reported.

Congress leader Alka Lamba also asked why the information was not shared with chief ministers on "apprehensions of a foreign hand" in the Udaipur incident.

I have spoken with the CM. He has provided us with financial help too. He has also assured me of a Government job. He is cooperating with us, and we are ready to cooperate too: Yash, son of Kanhaiya Lal who was beheaded on June 28th by two men in Udaipur, Rajasthan told ANI

Terming the brutal killing of a tailor in Rajasthan's Udaipur as an act of terror, Karnataka Chief Minister Basavaraj Bommai on Thursday alleged there was a big international conspiracy behind the incident, and wanted the case to be investigated thoroughly, PTI reported.

All those behind the incident including international organisations should be brought to justice and the guilty must be hanged, he demanded.

A large number of people protest against the Udaipur murder incident in Rajasthan's Udaipur. KanhaiyaLal, a tailor was beheaded by two men on June 28 for allegedly posting content in support of suspended BJP leader Nupur Sharma.

#WATCH | A large number of people protest against the Udaipur murder incident in Rajasthan's Udaipur#KanhaiyaLal, a tailor was beheaded by two men on June 28 for allegedly posting content in support of suspended BJP leader Nupur Sharma pic.twitter.com/IMkFhqDjRY

Udaipur murder: Markets in most parts of Jaipur remain closed

Markets remained closed in most of the parts of Jaipur on Thursday following a bandh call given by a traders' body and the Vishwa Hindu Parishad to protest the brutal killing of a tailor in Udaipur, reported PTI.

Elaborate security arrangements have been made in view of the bandh, officials said, adding that emergency services are exempted.

UP bans processions after Udaipur killing

The Yogi Adityanath government has banned processions and any kind of protest against the Udaipur incident in the state. Director-General of Police (DGP) D.S. Chauhan said security has been stepped up across the state and action would be taken against anyone making provocative remarks.

Additional DG, law and order, Prashant Kumar, said that permission would be needed for any religious or political function on the issue.

The weapon of attack on Kanhaiyalal was made by accused himself

The weapon of attack on Kanhaiyalal was made by Riyaz-Gaus himself, who also shot the video in the same factory.

Riyaz Attari and Mohammad Gaus, accused in the Kanhaiyalal murder case, had made sharp weapons at SK Engineering Works. The accused also shot videos in the same factory before and after the murder

Morning visuals from #Udaipur where Section 144 is imposed for a month, after the killing of a Hindu tailor Kanhaiya Lal.

Rajasthan | Morning visuals from #Udaipur where Section 144 is imposed for a month, after the killing of #KanhaiyaLal pic.twitter.com/VG4sg4Lv0G

"I want to assure you that no criminal will be spared irrespective of any religion or community," he tweeted. 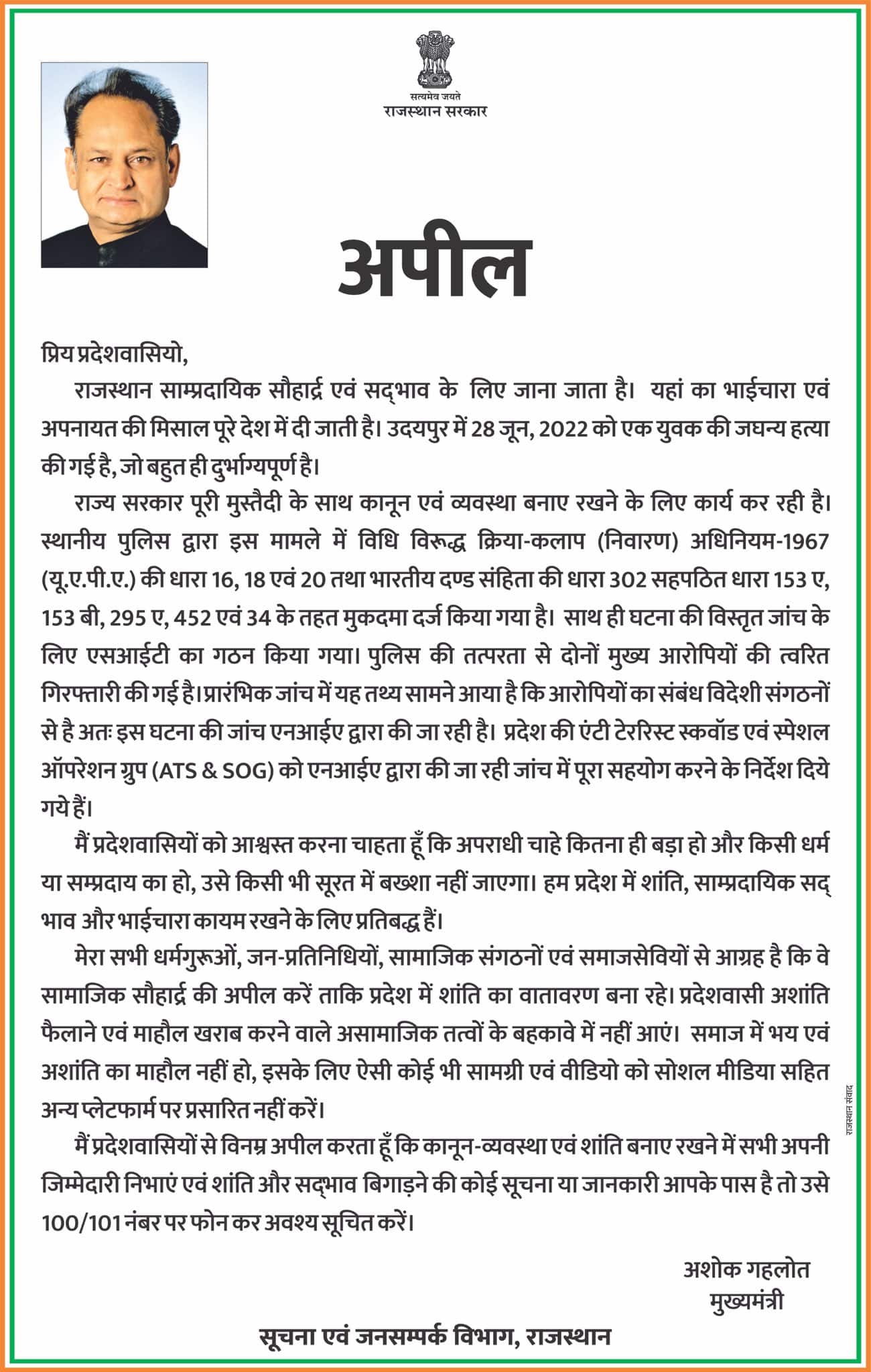 If anybody was negligent in this matter, strict action will be taken: Sachin Pilot

Amid the row over the beheading of a tailor in Rajasthan`s Udaipur by two men, Bharatiya Janata Party (BJP) general secretary Kailash Vijayvargiya on Wednesday said the Congress` appeasement politics is bringing "Talibani culture" into the country, PTI reported.

Speaking to ANI, he said, "The incident is very shocking. It was done to spread terror. The video of the incident is very disturbing. This is the emergence of Talibani culture and Congress is giving protection to it. This is happening because of Congress` appeasement politics."