Exit Polls results for the crucial Gujarat Assembly Elections showed that the vote share majorly titled towards the BJP.  Watch this space for live updates.

Gujarat Elections Exit Polls: The second phase of polling for Gujarat Elections 2022 took place on Monday (December 5) for 93 seats across 14 districts of north and central regions. The exit poll results for Gujarat Assembly Election is announced. On Zee News, the Exit Poll Results for the Gujarat Assembly Election showed vote share among BJP, Congress, AAP, and other parties and the seat projection as well.

Who will the people of Gujarat elect?

The key Gujarat elections saw the Bharatiya Janata Party (BJP), Congress, and Aam Aadmi Party (AAP) along with other parties contesting for seats in the state.

The fate of over 800 candidates including 285 independents will be decided after the completion of the second phase of the Gujarat polls. The counting of all votes for the state assembly elections will take place on December 8.

According to the Zee News-BARCA exit poll on Gujarat Elections 2022, BJP is set to win a record number of seats (110-125) out of 182 seats. The BJP has been in power in Gujarat for the last 27 years and PM Modi who participated in the party's poll campaign has a high approval rating in the state. Usually, the battle for Gujarat has been between the BJP and Congress but this year, Aam Aadmi Party also entered the arena in hopes of bagging a few seats to make its presence felt in the state. The exit poll showed that AAP may win more seats in Southern Gujarat.

Earlier there were worries that AAP may make a dent in Congress' vote share. This fear may be rooted in reality as the number of seats that Congress is likely to win is not looking too impressive.

According to the Zee News-BARC exit poll, BJP is likely to sweep the state with the most seats. Congress may lose their number of seats due to AAP's presence. The Kejriwal-led AAP will be able to open its account in the Gujarat Assembly.

Take a look at seat projection in Gujarat based on Zee News' exit polls:

BJP may get 35 seats out of 54 seats in Central Gujarat. Congress may get 17 seats and AAP may get 2 seats.

Stay tuned to see how many seats BJP, AAP and Congress are projected to win in Gujarat's 182-member assembly and if BJP's 27-year-long tenure streak is broken or maintained.

Results of Zee News' Exit Polls on Gujarat Assembly Election to be out soon.

State BJP chief on the last phase of polling in Gujarat Polls said that he is confident that BJP will form the government with a record number of seats in the state.

Himachal Pradesh CM Jairam Thakur, while speaking about the exit polls, told ANI, "Many of the exit polls are showing BJP forming govt while some show a neck-to-neck fight on a few seats. We should wait till Dec 8. According to our analysis there's complete possibility of BJP comfortably forming the govt." 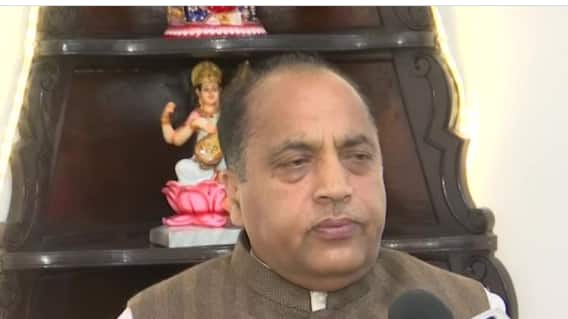 Electronic Voting Machines and Voter-verified paper audit trails were seen being sealed and secured as voting ended in the Gujarat Assembly elections. The counting of votes will take place on December 8.

EVMs and VVPATs are being sealed and secured as voting ends in Gujarat Assembly elections; counting of votes on December 8

The Gujarat BJP chief CR Patil said that the Congress had the right to complain about election conduct however, PM Modi did not do any road show. He said, "He (PM Modi) did not violate any rules. He walked from the car to the voting centre. Those naming this as a road show are clearly showing their disappointment."

Congress vs BJP: Was there a roadshow on 2nd phase of Gujarat Polling day?

The Congress had earlier complained that PM Modi had held a "roadshow" on the day of polling in Gujarat. The Additional Chief Electoral officer responded to the Congress' allegations and said, "Congress party complained about PM walking to booth, we asked for an immediate report from the election officer in Ahmedabad. As per the report it doesn't get established that it was a roadshow & crowd was there on its own."

#GujaratAssemblyPolls | Congress party complained about PM walking to booth, we asked for an immediate report from the election officer in Ahmedabad. As per the report it doesn't get established that it was a roadshow & crowd was there on its own: Addl Chief electoral officer pic.twitter.com/s0SCZiPr3p

The Zee News MCD exit poll found that garbage management was the biggest issue in the Delhi civic polls. The other key issues were corruption, bad road, trash mountains, stray animals, and pollution. 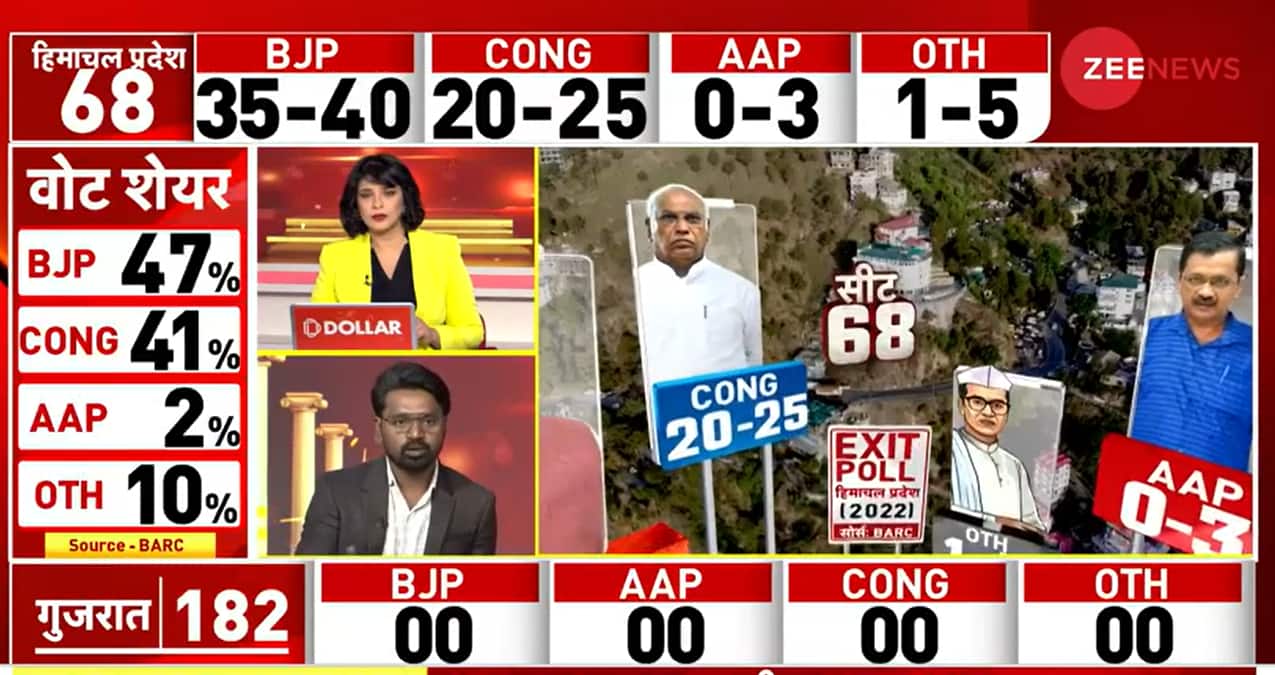 The BJP seems to have the upper hand in the vote share and possible seats it could win as per Zee News' exit poll. Congress comes second to the saffron party with the 2nd highest seat and vote share.

There are 68 seats in the Himachal Pradesh Assembly. According to Zee News' exit poll on Himachal Pradesh Elections, BJP has a chance of winning 35-40 seats, Congress may win 20-25 seats and Aam Aadmi Party may bag 0-3 seats whereas other parties may win 1-5 seats.

Himachal Pradesh elections: What were the exit polls questioned based on?

In Himachal Pradesh exit polls, the voters were asked about their voting choice based on the key issues raised in the state such as the Old Pension Scheme. The Zee News exit poll found that these voting patterns - 47% vote share for,  41% for Congress, 10% for other and 2% for AAP. 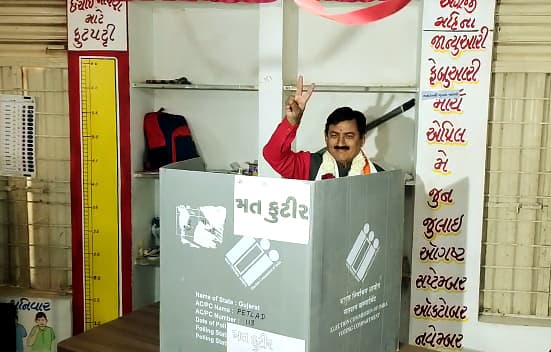 Approximately 58.68% of polling was recorded till 5 pm in the second phase of Gujarat Assembly Polls, stated the Election Commission of India (ECI).

The two former cricketers voted in the Gujarat Assembly Elections along with their family members.

"I appeal to people to come out and vote," says former Indian Cricketer Yusuf Pathan pic.twitter.com/jf4uhySB9P

The Election Commission said that 50.51% voter turnout was recorded till 3 pm in the second and the last phase of the Gujarat Assembly elections. 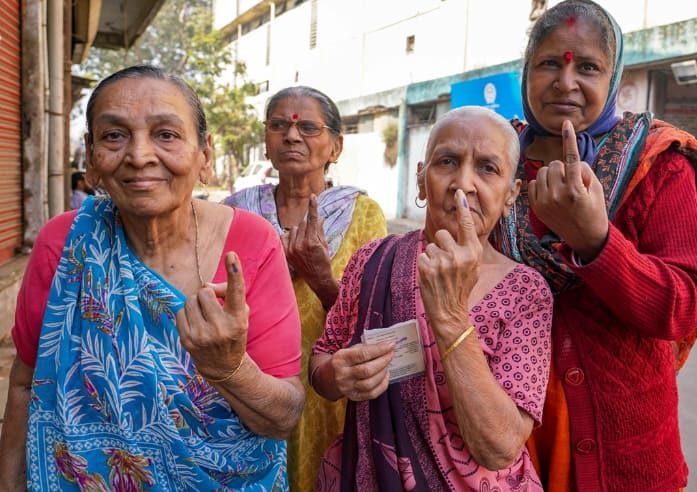 Exit Polls results to be out after 6:30 pm

"As per the Commission`s notification, results of the exit poll for the General Election to the Legislative Assembly of Himachal Pradesh can be released only after 6:30 pm on December 5, 2022," tweeted Chief Electoral Officer

West Bengal chief minister Mamata Banerjee, on Monday, criticised the BJP for holding "roadshows" on the day of voting in the Gujarat Elections. She said, "Roadshow is not permitted on the day of voting but Prime Minister Modi and his party are VVIPs, they can do anything and they will be excused."

Roadshow is not permitted on the day of voting but Prime Minister Modi and his party are VVIPs, they can do anything and they will be excused: West Bengal CM Mamata Banerjee on Gujarat polls 2022 pic.twitter.com/8hNo4i7Gpp

What is an exit poll?

An exit poll tries to understand the sentiment of the voters just after they cast their vote outside polling stations. It is used to see which party the voters voted for in the election. Exit polls are usually carried out by media houses or private companies to get an idea of the results. Zee News' exit poll for the Gujarat Election will be out on Monday at 7 pm. The counting of votes for Gujarat Elections will take place on Dec 8.