In the Rampur Sadar Assembly bypoll, which is considered Azam Khan's bastion, BJP defeated the Samajwadi Party. The saffron party won the Assembly seat for the first time after its candidate Akash Saxena defeated his nearest SP rival Asim Raja by a margin of 33,702 votes.

Bypoll to the Rampur Sadar seat was necessitated after Azam Khan was sentenced to three years in jail in a hate speech case, and subsequently disqualified as MLA.

In the Khatauli Assembly bypoll, Madan Bhaiya of the SP-RLD alliance won the seat with a margin of 22,054 votes. He defeated BJP candidate Rajkumari Saini. While Madan received 97,139 votes, Saini could manage 74,996.

The by-election in Khatauli was necessitated due to the disqualification of BJP MLA Vikram Singh Saini following his conviction by in different cases. The BJP had then tried to retain the seat by fielding Rajkumari Saini, the wife of Vikram Singh Saini.

The counting of votes was also held for by-elections in four other assembly constituencies - Padampur in Odisha, Sardarshahar in Rajasthan, Kurhani in Bihar and Bhanupratappur in Chhattisgarh, and for Gujarat and Himachal Pradesh assembly polls.

Thanks for staying with Zee News.

"Heartiest congratulation to winning candidates of Mainpuri, Rampur and Khatauli by-polls in Uttar Pradesh," Adityanath said in a tweet in Hindi.

"BJP has won the Rampur seat for the first time. For this, congratulations to all workers of Rampur, including Akash Saxena, and thanks to the almighty public (for support)," he added.

In the Khatauli Assembly bypoll, Madan Bhaiya of the SP-RLD alliance has won the seat with a margin of 22,054 votes. He defeated BJP candidate Rajkumari Saini. While Madan polled 97,139 votes, Saini could manage 74,996.

The by-election in Khatauli was necessitated due to the disqualification of BJP MLA Vikram Singh Saini following his conviction by in different cases.

Mainpuri, an SP's bastion, was earlier held by party founder and Dimple Yadav's father-in-law Mulayam Singh Yadav and got vacated after his death on October 10. Earlier in the 2019 Lok Sabha polls, Mulayam Singh had won the Mainpuri seat by defeating BJP candidate Prem Singh Shakya by 94,389 votes.

Reacting to the development, Congress leader and Chief Minister Bhupesh Baghel said that the people of Bhanupratappur put their stamp of approval to the works done by his government in the last four years.

He thanked the people of Bhanupratappur for reposing faith in his government.

The JD(U) had snapped ties with BJP four months ago.

'There was no election,' says Asim Raza

UP Bypolls 2022: SP candidate Asim Raza, while leaving the counting centre, said that there was no election because 2.25 lakh people were not allowed to cast their vote.

Bypolls 2022: BJP candidate Akash Saxena told the reporters that he would work to develop Rampur as an industrial hub. He said that Rampur had broken the shackles of slavery after 50 years and had chosen the BJP.

Khatauli by-election results 2022: As per the latest updates, RLD's Madan Bhaiya is now leading by 13,135 votes in Khatauli over the BJP's Rajkumar Saini.

Mainpuri bypoll results: Samajwadi Party candidate Dimple Yadav has taken an unassailable lead of over 2.38 lakh votes in the Mainpuri Lok Sabha constituency. She is currently leading over over BJP candidate Raghuraj Singh Shakya by 2,63,138 votes.

UP by-election results 2022: RLD's Madan Bhaiya now leading by over 12,000 votes in Khatauli

Bhanupratappur Assembly bypoll: Congress' Savitri Mandavi ahead by over 14,000 votes

Mandavi has so far secured 30,196 votes, while Netam got 15,778 votes after nine rounds of counting. Akbar Ram Korram, who is contesting as an independent, is on the third position with 15,227 votes.

Padampur bypoll result 2022: The ruling Biju Janata Dal (BJD) has extended its lead to 15,541 votes over the BJP after the eighth round of counting for the by-poll to the Padampur assembly seat in Odisha. Barsha Singh Bariha is currently leading by 17,445 votes over BJP's Pradip Purohit.

Kurhani bypoll result updates: The BJP and JD(U) in Bihar are currently fighting neck and neck with the latter gaining a lead of 1,802 votes after the ninth round of counting in the bypoll for by-election to the Kurhani assembly constituency. As per the latest updates, JD(U)'s Manoj Singh Kushwaha is currently leading over BJP's Kedar Gupta by 1,552 votes.

Gupta was leading till the eighth round of counting.

Rampur by-election results 2022: SP's Mohd Asim Raja maintains has maintained his lead over rival BJP candidate Akash Saxena. He is currently ahead by over 4,200 votes. 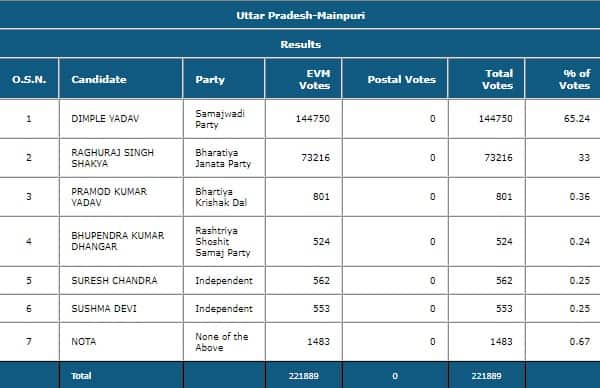 Padampur bypoll results: The ruling Biju Janata Dal (BJD) has extended its lead to 8,178 votes over the BJP after the fourth round of counting for the by-poll to the Padampur assembly seat in Odisha's Bargarh district. Barsha Singh Bariha, the daughter of late MLA Bijay Ranjan Singh Bariha, whose death necessitated the by-poll, has so far won 21,837 votes, while the BJP's Pradip Purohit bagged 13,659 votes.

Khatauli by-election result 2022: RLD's Madan Bhaiya is currently ahead by over 1,387 votes in Khatauli over BJP's Rajkumar Saini.

UP bypoll results 2022: Samajwadi Party candidate Dimple Yadav has maintained her comfortable lead in the Mainpuri Lok Sabha constituency. Yadav has taken a lead of over 35,574 votes over her nearest rival BJP candidate Raghuraj Singh Shakya.

Kurhani bypoll latest updates: The BJP has extended its lead in the by-election to Kurhani assembly constituency after the fourth round of counting. According to information shared by CEO officials, the BJP's Kedar Gupta was ahead with a margin of 941 over his nearest JD(U) rival Manoj Singh Kushwaha. While Gupta secured 15,493 votes, Kushwaha got 14,552 after the fourth round of counting.

UP bypolls 2022: RLD's Madan Bhaiya is currently leading by over 1,000 votes in Khatauli over BJP's Rajkumar Saini, as per the Election Commission website.

Sardarshahar bypoll result updates: Congress is currently leading in the Sardarshahar assembly seat in Rajasthan's Churu district. According to trends available for the bypoll, Congress' Anil Kumar has so far got 24,404 votes. Lal Chand Moond of RLD has got 15,713 votes and BJP's Ashok Kumar has received 15,495 votes. 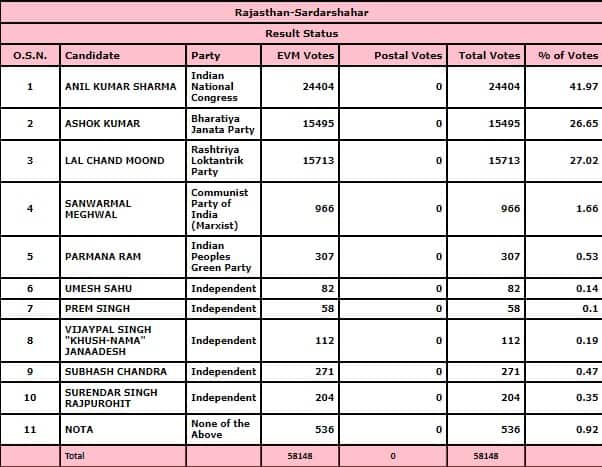 Padampur bypoll results 2022: As per the latest update, BJD's Barsha Singh Bariha is currently leading over BJP's Pradip Purohit. Bariha has so far polled over 5,501 votes and Bariha has received 3,789. 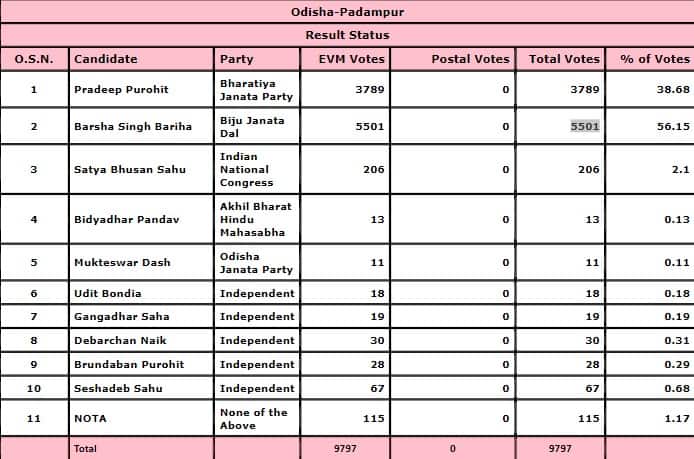 Kurhani Assembly Bypoll Results: BJP's Kedar Gupta ahead after round 1 of counting

Kurhani Assembly Bypoll Results 2022: BJP candidate Kedar Prasad Gupta has established an initial lead in the by-election to the Kurhani assembly constituency in Muzaffarpur district in Bihar. He has so far secured 7,936 votes while the JD(U)'s Manoj Singh Kushwaha bagged 6,369 votes. 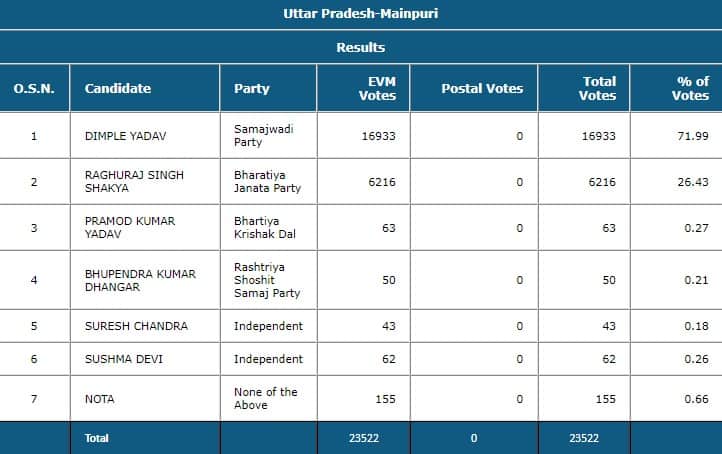 Rampur Sadar bypolls 2022 result: In the Rampur Sadar assembly segment, Azam Khan's protege and SP leader Asim Raja is currently leading over BJP's Akash Saxena by 129 votes after the first round of counting. While Asim Raja has so far polled 1,277 votes, Saxena has received 1,148.

UP By-Election Result 2022 Live Updates: Samajwadi Party candidate Dimple Yadav is currently leading with 4,800 votes after the third round of counting in Mainpuri. She has established a comfortable lead over her nearest rival Raghuraj Shakya of the BJP.

Bhanupratappur Assembly seat byelection: Though seven contestants are in the fray in Chhattisgarh's Bhanupratappur bypolls, the main fight is between the ruling Congress and the opposition Bharatiya Janata Party (BJP).

While the Congress has fielded Savitri Mandavi, the wife of late MLA Manoj Singh Mandavi, the BJP has nominated former legislator Brahmanand Netam.

Notably, the bypoll in Bhanupratappur was necessitated following the death of Congress MLA and deputy speaker of Assembly Manoj Singh Mandavi on October 16.

Kurhani by-election: In the by-election to the Kurhani assembly constituency in Bihar's Muzaffarpur district, Chief Minister Nitish Kumar's JD(U) and the BJP have locked horns for the first time since their break-up four months ago.

Altogether 13 candidates, five of them Independents, are in the fray though the contest is being seen, primarily, as between the BJP's Kedar Gupta and the JD(U)'s Manoj Singh Kushwaha. Both are former MLAs.

The by-poll was necessitated by the disqualification of sitting RJD MLA Anil Kumar Sahani.

Sardarshahar Assembly bypoll: In the Sardarshahar Assembly seat in Rajasthan's Churu district, the bypoll was necessitated by the demise of Congress MLA Bhanwar Lal Sharma, who passed away on October 9 after prolonged illness. The Congress has fielded Sharma's son Anil Kumar against former BJP MLA Ashok Kumar.

UP bypolls 2022: Fight between BJP's Rajkumari Saini and RLD's Madan Bhaiya in Khatauli

UP bypolls 2022: In Khatauli, BJP's Vikram Singh Saini's wife Rajkumari Saini is up against and Madan Bhaiya of the RLD.

Mainpuri bypolls 2022: All eyes are on the wife of Akhilesh Yadav, Dimple Yadav, who is contesting from the Mainpuri Lok Sabha seat.

The Mainpuri seat is considered a stronghold of the Samajwadi Party.

There are four other candidates in the fray. 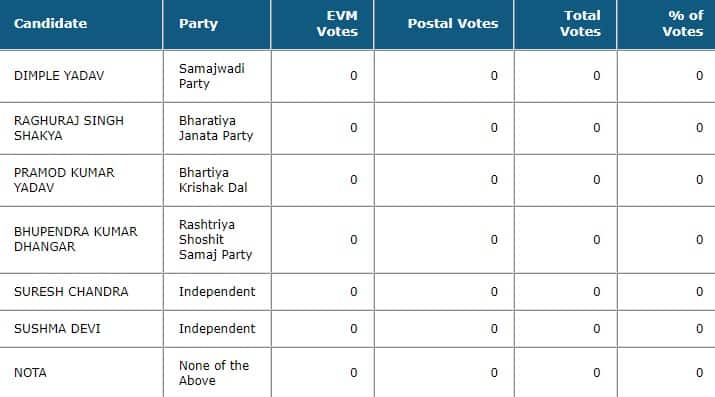 By-elections 2022: The voter turnout in Padampur in Odisha was 76 per cent, nearly 70 per cent in Sardarshahar in Rajasthan, 64.86 per cent in Bhanupratappur in Chhattisgarh and around 58 per cent in Kurhani in Bihar.

Khatauli by-election: The Khatauli Assembly segment in Muzaffarnagar had recorded 56.46 polling on December 5.

Rampur bypoll 2022: Only around 34 per cent of electors cast their votes in the Rampur assembly constituency on December 5.

You can also visit Zee News English's website for the latest updates.

UP bypoll results: Why Khatauli is crucial for RLD

The by-election in Khatauli is crucial for RLD, which is contesting the seat in alliance with the SP. Its candidate Madan Bhaiyya is a well-known face in the region and his victory would serve as an elixir for RLD and reinforce its position in western Uttar Pradesh.

Uttar Pradesh by-elections: Why these bypolls are crucial for Azam Khan

These by-elections are also crucial for senior SP leader Mohd Azam Khan, who has not only been disqualified from the state assembly -- which necessitated the Rampur bypoll -- but has also lost his right to vote.

Azam Khan, who has fielded his protege Asim Raza as the SP candidate, has been making highly emotional speeches in the campaign. He knows that the victory in Rampur may ensure his survival in politics while a defeat will mark the end of his reign in Rampur.

Uttar Pradesh Bypoll Result 2022 Live Updates: In the Mainpuri Lok Sabha seat, there are six candidates in the fray. The main contest is between SP president Akhilesh Yadav's wife Dimple Yadav and BJP`s Raghuraj Singh Shakya. Shakya, who was once a close associate of Pragatisheel Samajwadi Party chief and Akhilesh's uncle Shivpal Singh Yadav, joined the saffron party ahead of the Uttar Pradesh Assembly polls held earlier this year.

UP By Election Result 2022 Live Coverage: The authorities are all geared up for the counting of votes on Thursday for the bypolls to Mainpuri Lok Sabha and Rampur Sadar and Khatauli constituencies assembly in Uttar Pradesh.

While the bypoll to the Mainpuri parliamentary seat took place due to the death of Samajwadi Party (SP) founder Mulayam Singh Yadav, the polls were necessitated in Rampur Sadar after SP MLA Azam Khan was disqualified following his conviction in different cases. In Khatauli, the byelections took place after BJP MLA Vikram Singh Saini lost his membership of the assembly after his conviction in a 2013 Muzaffarnagar riots case.