PM Narendra Modi addressed the nation on the occasion of 76th Independence Day from the ramparts of Red Fort in Delhi and said that it is a day to step towards a new direction with a new resolve.

New Delhi: Prime Minister Narendra Modi on Monday (August 15, 2022) delivered his ninth consecutive Independence Day speech from the ramparts of the Red Fort and said that the country is grateful to freedom fighters who shook the foundations of the British Empire. After unfurling the national flag at the iconic monument, Prime Minister Modi congratulated all Indians and those who love India on this Independence Day and said it is a day to step towards a new direction with a new resolve.

"Our country is grateful to Gandhiji, Bhagat Singh, Rajguru, Ramprasad Bismil, Rani Laxmi Bai, Subash Chandra Bose, and all other freedom fighters who shook the foundations of the British Empire," he said.

PM Shri @narendramodi unfurls the Tricolour flag at the ramparts of #RedFort on the occasion of 76th #IndependenceDay in Delhi. pic.twitter.com/MMIfG9usiF — BJP (@BJP4India) August 15, 2022

"During our freedom struggle, there was not one year where our freedom fighters did not face brutality and cruelty. Today is the day when, as we pay them our respects, we need to remember their vision and dream for India," PM Modi added.

"My understanding of the spirit of India, made me realise that for the growth of new India we needed to ensure inclusive development across the nation - a vision that was held dear by Mahatma Gandhi," PM said.

"We salute not only those who fought for freedom but also the architects of free India such as Jawaharlal Nehru, Ram Manohar Lohia, and Sardar Vallabhai Patel, amongst many others," the prime minister said.

During his Independence Day speech to the nation, PM Modi said that India is the "mother of democracy".

"Our nation has proved that we have the inherent strength coming from our diversity and the common thread of patriotism that makes India unshakeable," he said.

"In 2014, the people of the country gave me responsibility. I was the first person born after the independence who got the opportunity to address people from the Red Fort," Prime Minister Modi said.

He also said that the world today looks at India with "pride, hope and as a problem solver".

"The world looks at India as a destination where aspirations are met," Modi said. 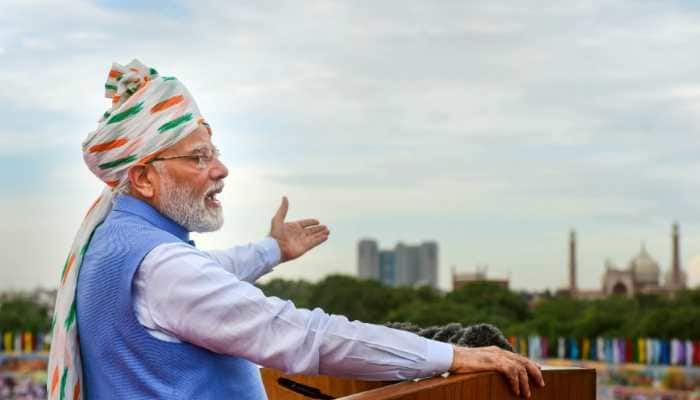 This time, PM Modi chose a traditional kurta and churidar paired with a blue jacket 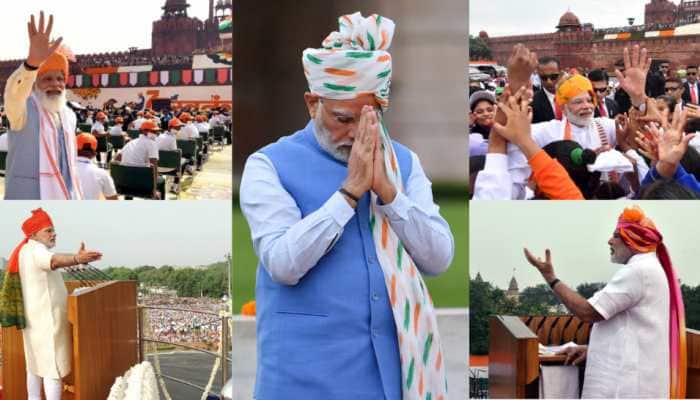 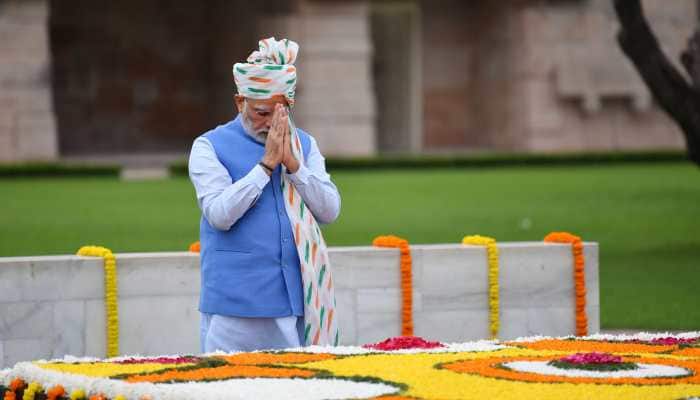 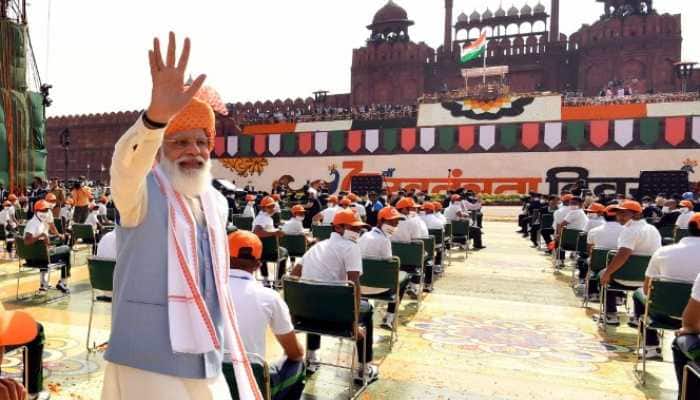 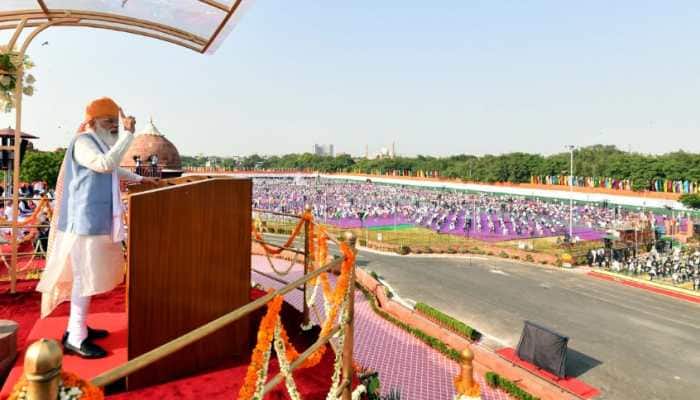 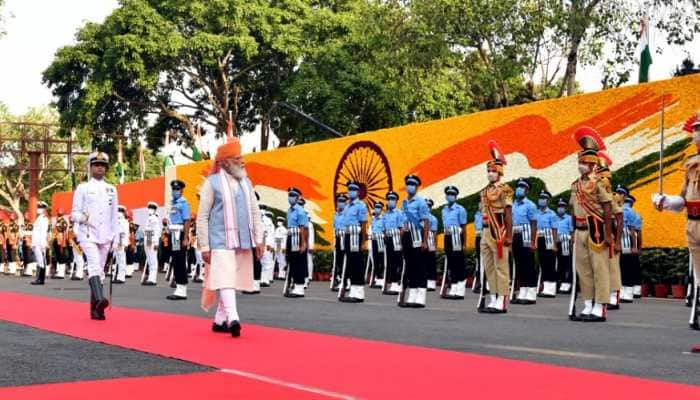 PM Narendra Modi inspecting the Guard of Honour at Red Fort on August 15, 2021 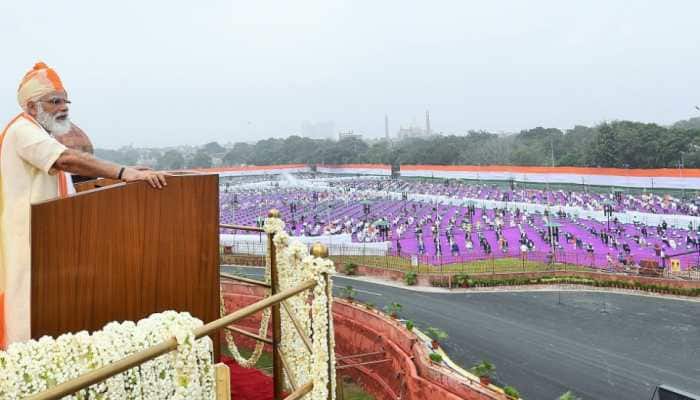 PM Narendra Modi addressing the nation on the occasion of 74th Independence Day from the ramparts of Red Fort, in Delhi on August 15, 2020 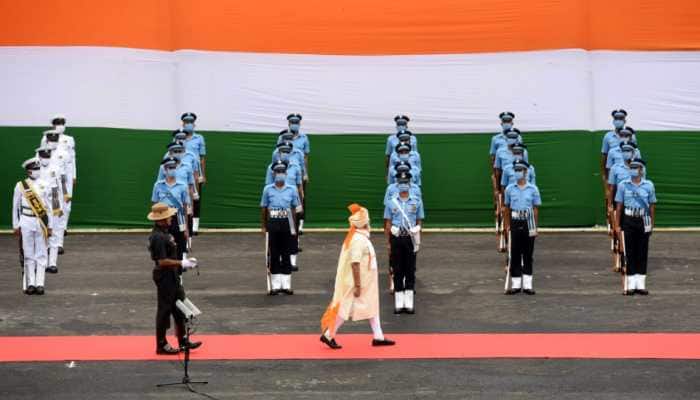 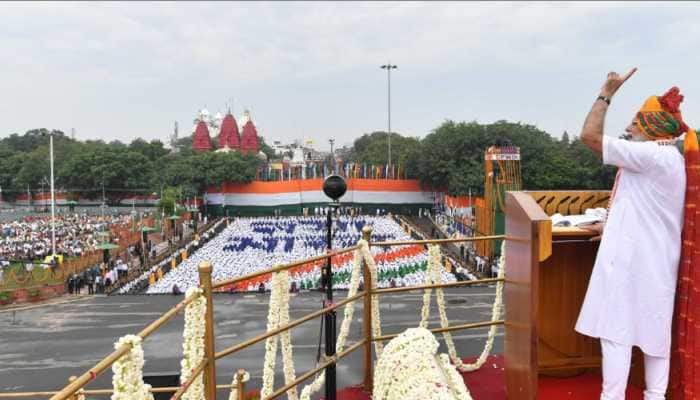 In 2019, PM Modi sported a multi-coloured turban for his sixth Independence Day speech 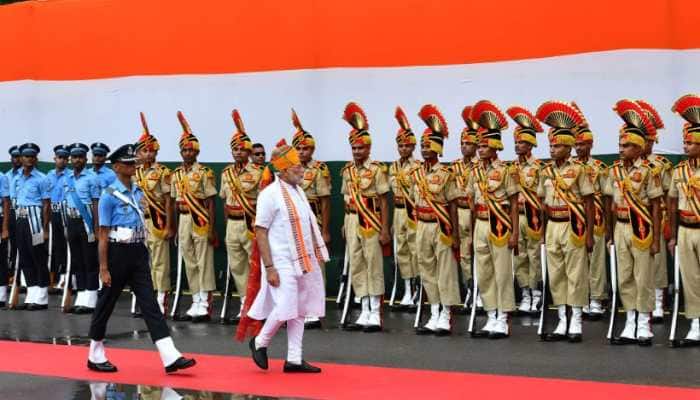 PM Narendra Modi inspecting the Guard of Honour in 2019 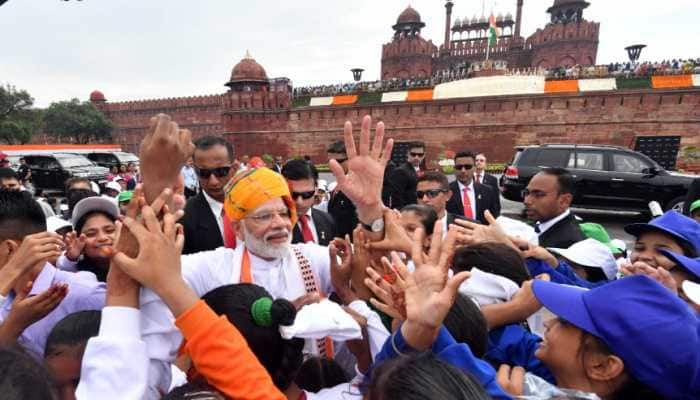 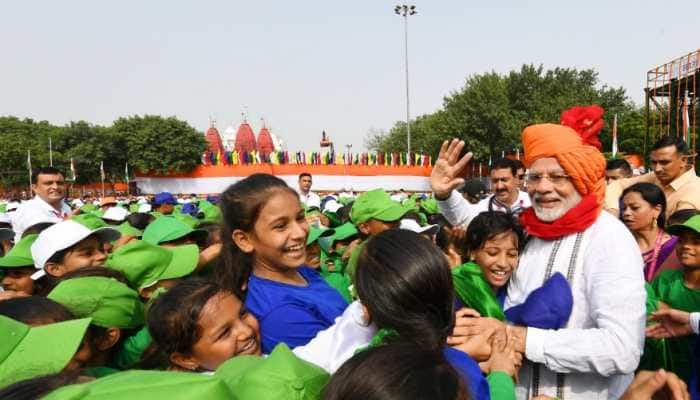 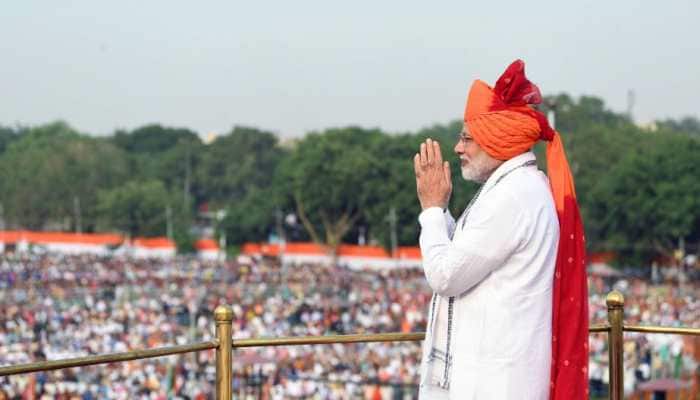 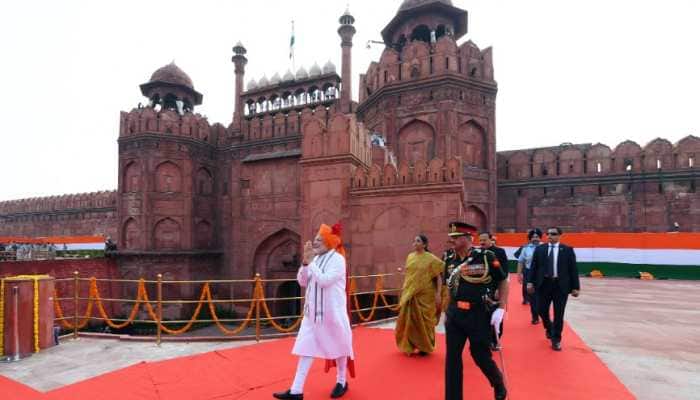 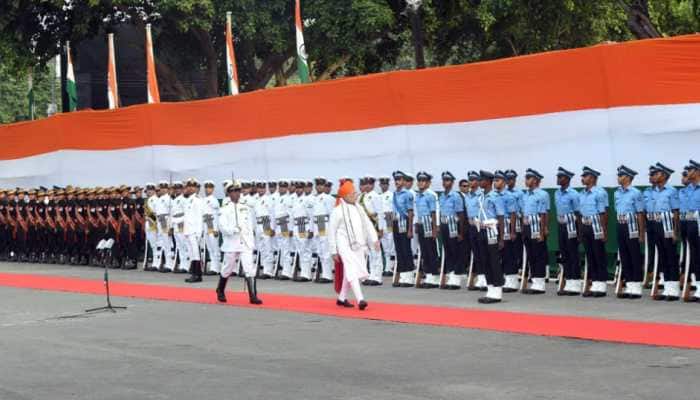 Prime Minister Narendra Modi inspecting the Guard of Honour in 2018 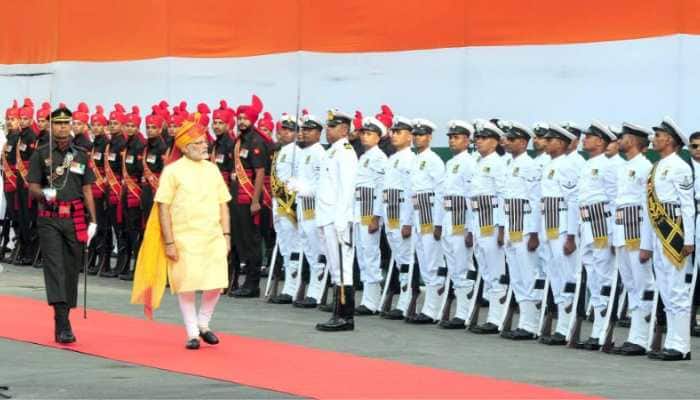 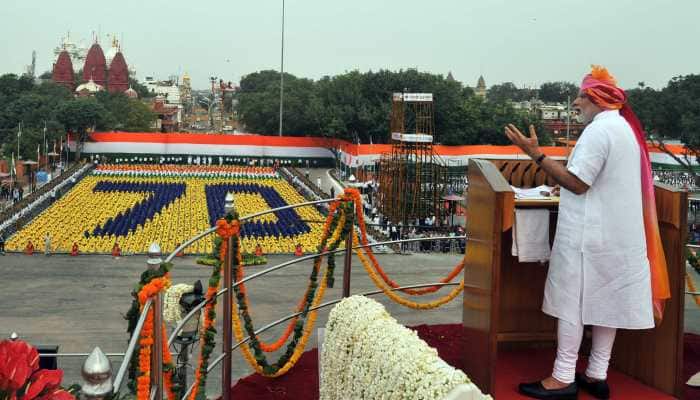 In 2016, PM Narendra Modi donned a tie and dye turban in hues of pink and yellow 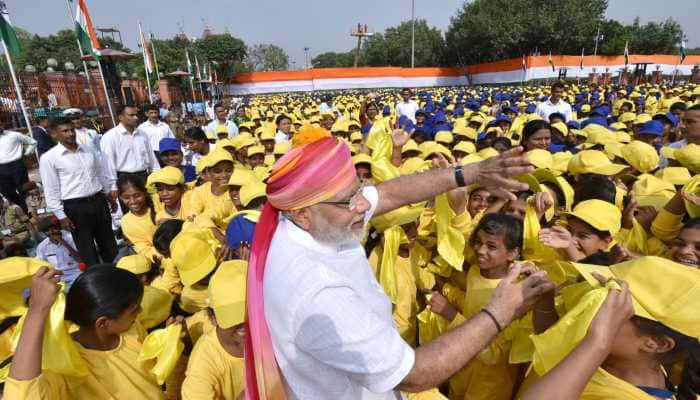 Prime Minister Modi on the occasion of 70th Independence Day 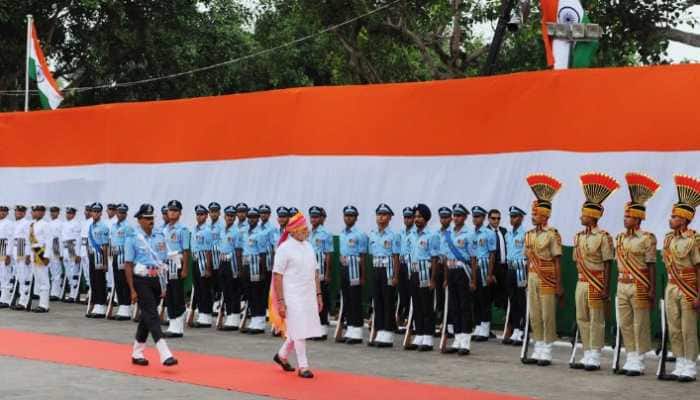 PM Modi inspecting the Guard of Honour at Red Fort on August 15, 2016 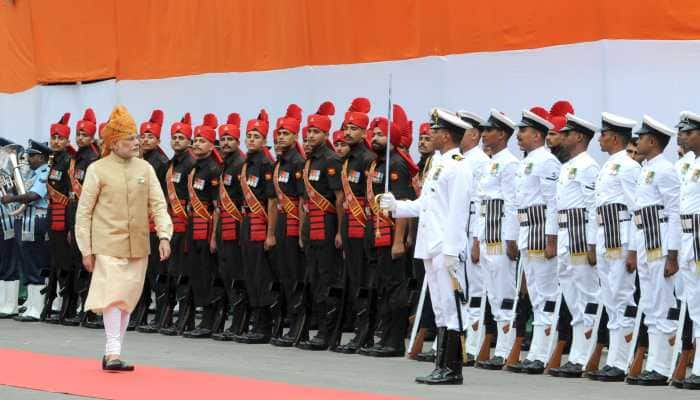 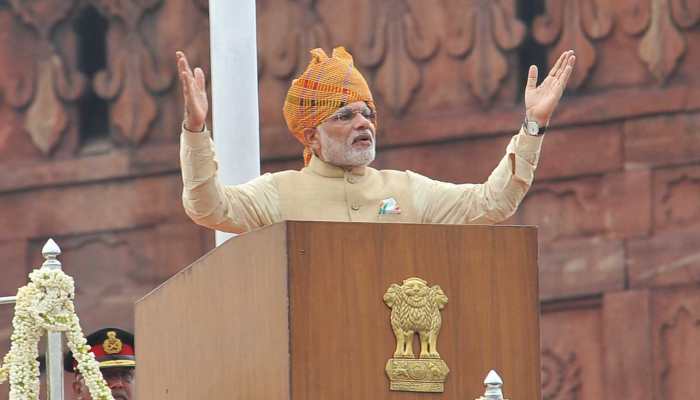 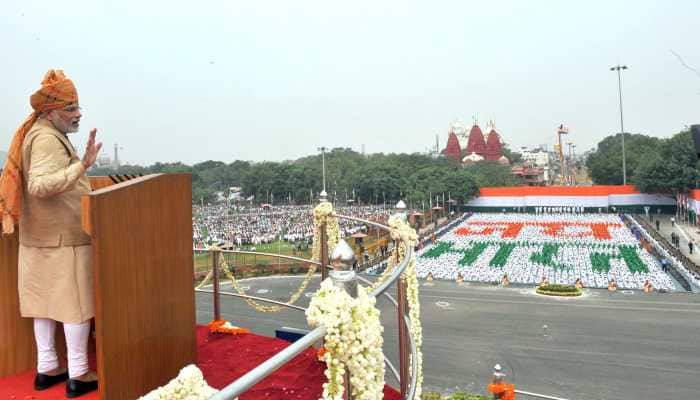 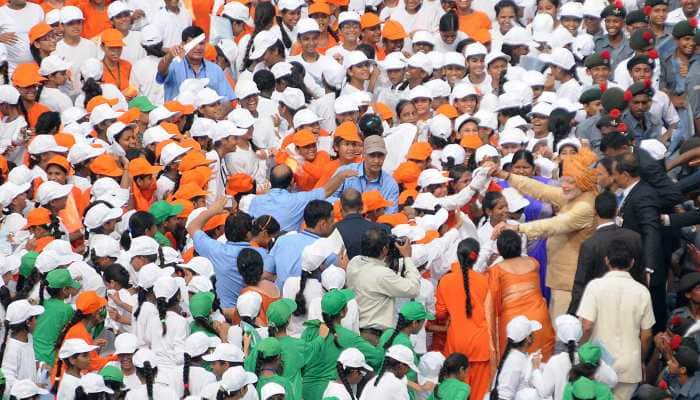 PM Narendra Modi interacting with the school children in 2015 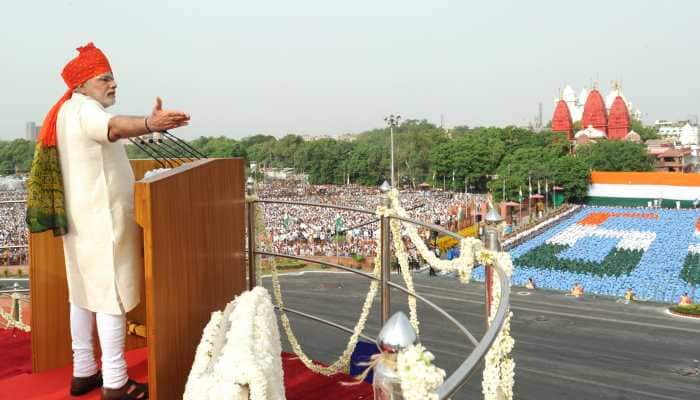