New Delhi: Union Ministry of Finance on Wednesday (January 1, 2020) released the data of Goods and Services Tax (GST) collection for December 2019. Accordingly, gross revenue on account of GST totalled Rs 1.03 lakh crore in December, up 16 per cent in the year-ago period.

During the month, the IGST on import of goods saw a negative growth of 10 per cent but marked improvement over minus 13 per cent in November and minus 20 per cent in October. 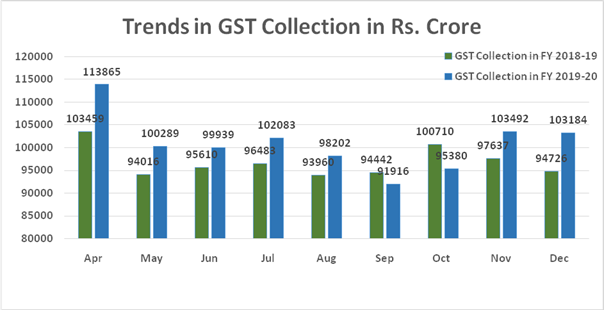 Some of the states and Union Territories that recorded very high growth in GST collection were Jammu and Kashmir (40%), Sikkim (43%), Nagaland (88%) and Arunachal Pradesh (124%).

The states that posted lower growth in GST collection were Rajasthan(10%), Punjab (11%)and Uttar Pradesh (11%). Jharkhand reported negative growth (-3%) in the collection during the said period.